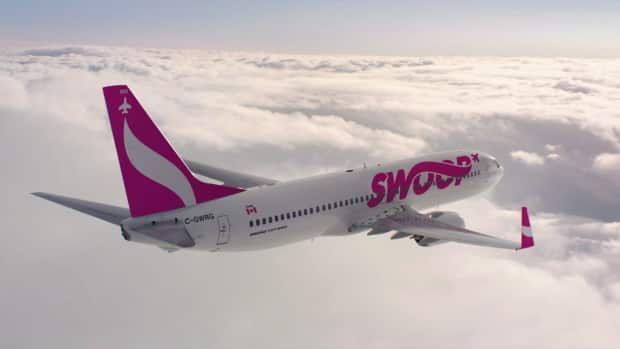 Before WestJet’s discount airline takes flight tomorrow, Swoop celebrated at its first base in Hamilton today.

Greenway says John C. Munro Hamilton International Airport is where the airline chose its first base because it ticks all of the boxes in terms of ultra low-cost carriers. It’s a small airport, it’s not congested, it’s simple to operate from, and the team there “wooed” Swoop to Hamilton.

We have a lot of faith in terms of what we’re seeing in terms of numbers.– Swoop president Steven Greenway

Those are “all important factors in terms of making an overall decision about Hamilton being our first base,” said Greenway.

There will be multiple bases over the coming years, he said.

The no-frills airline will make its maiden voyage Wednesday morning to Abbotsford, B.C.

Instead of flying from Toronto Pearson International, flights will fly out of Hamilton’s lower-cost airport. Other initial cities are Winnipeg, Edmonton, Halifax and Abbotsford.

Additional destinations will be added, including international flights likely by the end of 2018, said Greenway. Flair plans to fly to Orlando and Palm Springs, Calif., next winter.

The name of the airline’s first aircraft — #Hamilton — a name that Hamilton Mayor, Fred Eisenberger took a liking to during a speech he made at the launch Tuesday.

“Thank you for the #Hamilton. #HamOnt would have been perfect, but #Hamilton is really good,” said Eisenberger in a video posted to Facebook by Swoop.

Great to attend the ribbon cutting and welcome our new air carrier Swoop flying out of Hamilton. We’ll see 24 flights a week with more to follow. Congratulations <a href=”https://twitter.com/hashtag/HamOnt?src=hash&amp;ref_src=twsrc%5Etfw”>#HamOnt</a> <a href=”https://t.co/x4G0l1dUuC”>pic.twitter.com/x4G0l1dUuC</a>

The Boeing 737-800NG has 189 seats and boasts an interior with a “pop of colour accents” on the headrests.

In terms of the workforce in Hamilton, Greenway said by the time they get to their fourth aircraft in August, just under 200 people will be based in Hamilton. That will predominantly be pilots and cabin crew.

Swoop says fares should be 30 to 40 per cent lower than a national carrier.

The key will be to keep costs down from lower labour costs, cramming 189 seats into Boeing 737-800s, and stimulating demand from people who don’t normally fly because of the high cost.

Greenway says Swoop will take take flight in Hamilton — unlike other low-budget airlines that have attempted and failed — because the time is right.

“We see five million Canadians going south of the border to fly out of Buffalo and other airports, flying U.S. airlines,” he said. “There’s traffic immediately that we can go after.”

According to Greenway, Swoop will offer Canadians not only a greater opportunity to travel by air, but take weekend getaways. He says there’s a new market for people who can now take longer weekends.

When it comes to competition, Greenway told CBC News that with any country, the competition is always fierce.

“We have to accept that it’s going to be a competitive market and that’s what the business plan was based on,” said Greenway.

A number of airlines have come and gone, he said.

“People are sort of hoping that this is the real thing and we believe it is. We have a lot of faith in terms of what we’re seeing in terms of numbers going forward, so we’re very positive about it and I think people are embracing that.”

Most of Swoops flights are full for the next couple of months, which he says “reinforces that the model is proving popular with the Canadian travelling public.”

Canada is the only G7 country without a true ultra low-cost carrier (ULCC), and the model has been successful in Europe, Australia and the United States, said transportation analyst Chris Murray of AltaCorp Capital.

“I don’t think we’ve ever seen a true ULCC model in the Canadian marketplace before, so I think we’re in somewhat uncharted territory,” he said.

“There are also frankly some opportunities if they do it well to be successful with it.”

The fares don’t include a range of fees, including carry-on luggage and checked bags starting at $26.25, seat selection starting at $5, and $15 to contact the call centre if the service can be carried out on the website.

No pets aside from guide dogs are allowed on board and any credits are only valid for 90 days. No loyalty points will be awarded.

Swoop is starting with two planes, with plans to roll out six by year-end and 10 in 2019.