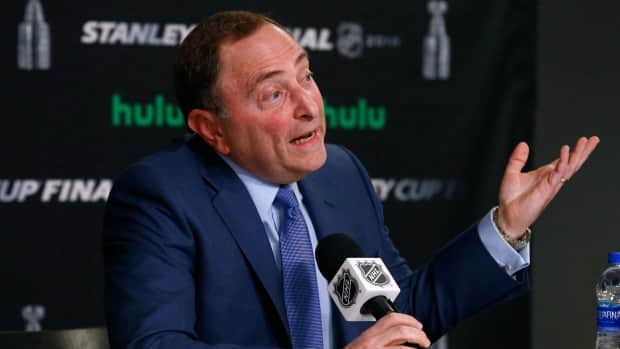 Despite a rash of recent negative headlines suggesting otherwise, NHL commissioner Gary Bettman says there is “no issue” with the Ottawa Senators.

Speaking after the NHL board of governors met ahead of the league’s awards show in Las Vegas on Wednesday, Bettman told reporters he isn’t concerned with the direction of the franchise.

This comes after a three-week stretch that saw the club’s assistant general manager charged with harassment and the wife of Ottawa captain Erik Karlsson allege she and her husband were the victims of cyberbullying by the fiancee of a now-former teammate.

Owner Eugene Melnyk also threatened in December to move the Senators if ticket sales didn’t improve before eventually backing down, the plan to build a new downtown arena remains very much up in the air and a club icon was quoted saying he hopes the team is sold.

“There’s always going to be some issue somewhere that has to be dealt with,” Bettman said. “The headstone has been written over the years for many franchises under a variety of circumstances and none of the burials ever took place.

‘More sensationalized than anything else’

Reminded that he’s stepped into revive failing franchises in the past, Bettman insisted that’s not required in the nation’s capital.

“We don’t think the club is anywhere close to cardiac arrest … there’s no issue up there,” he said. “I think it’s more sensationalized than anything else.”

Melnyk, meanwhile, avoided speaking with reporters after the board of governors meeting broke at the posh Encore hotel.

The Senators suspended assistant GM Randy Lee last week after he was charged with harassment stemming from an alleged incident at the NHL combine in Buffalo, N.Y. Lee has a court date next month and will miss the upcoming draft in Dallas.

News then broke that Melinda Karlsson, Erik’s wife, filed a peace bond in May alleging Monika Caryk, the fiancee of winger Mike Hoffman, posted hundreds of derogatory and harassing online messages aimed at her and her husband.

In an interview with Postmedia Ottawa last week, Caryk and Hoffman both denied they had anything to do with the cyberbullying of Melinda Karlsson.

All downhill after conference finals

Hoffman was traded to San Jose on Tuesday in a deal, far below market value for a first-line sniper, before the Sharks then flipped him to the Florida Panthers, the Senators’ Atlantic Division rival, hours later.

The past 12 months have not been kind to Ottawa, which finished 30th in the 31-team league this season after losing in double overtime in Game 7 of the Eastern Conference final last spring.

Melnyk made his threat to move the team on the eve of his showcase outdoor game in December, a comment that helped spur a grassroots campaign among a disgruntled segment of the fan base to raise money for billboards across the city sporting the hashtag #MelnykOut.

Former captain and fan favourite Daniel Alfredsson was then quoted at an event saying that he hopes Melynk sells the Senators to ensure their future in Ottawa.

The organization will also know soon where its stands on Karlsson, who can become an unrestricted free agent after next season. The Senators can offer him a new contract on July 1, but GM Pierre Dorion is likely going to be a popular man at the draft with other teams circling a roster that looks set for a full rebuild.

In other news to come out of Wednesday’s board of governors meeting in Las Vegas, Bettman said that while the final numbers still have to be agreed on with the NHL Players’ Association, the salary cap will jump from $75 million US this past season to between $79.5 million and $80 million in 2018-19.

“Other than the application continues, we’re not yet on a timetable,” Bettman said. “But things seem to be progressing without any hitches to this point.”