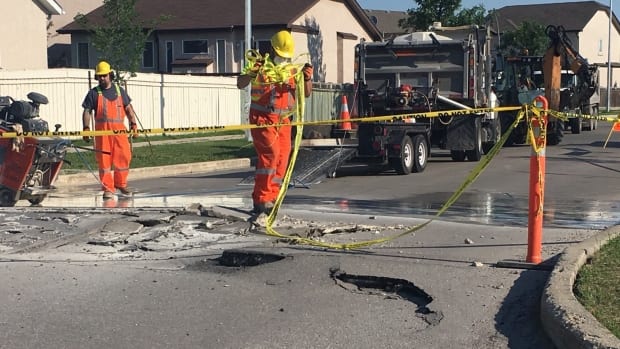 Concrete workers at a home in Whyte Ridge had to put their day job aside to detour traffic after a section of nearby Scurfield Bouelvard heaved up into the form of a ramp and left a big hole in the middle of the roadway.

A crew from local concrete business Muddruckers happened to be doing work on Debby Doig’s back patio on Portwood Drive Tuesday when they noticed the street open up on Scurfield. They dropped what they were doing to divert traffic until police and city crews showed up.

“They were terrific,” Doig said. “They slowed all the traffic down, they stood out there in that hot sun and they took care of the neighbourhood.”

Parts of jagged concrete almost a metre and a half in height were jutting up from the road and presented a hazard to traffic, she said. The heave went all the way across the road and extended to the sidewalk on the other side of a grass boulevard. 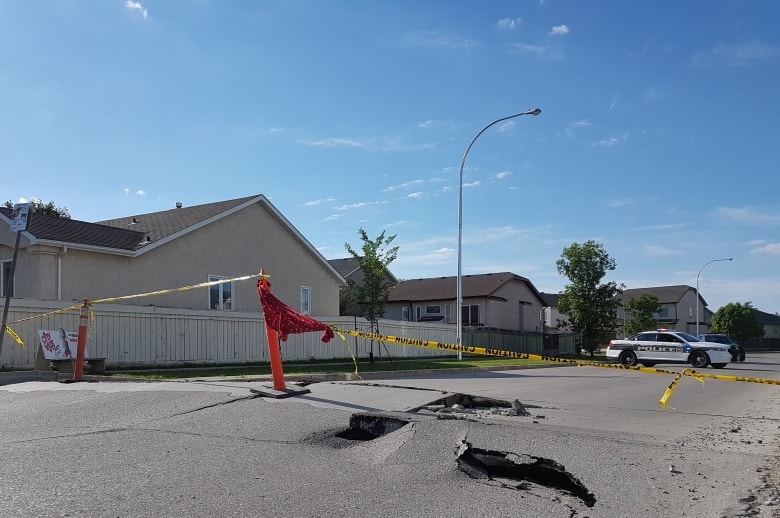 Shane Willim, one of the Muddruckers employees, said the crew heard “big bangs” between 3 p.m. and 4 p.m. Those noises drew them away from Doig’s patio to see what was happening.

“Saw that cars were launching off the heave in the street that had formed a decent-sized ramp,” Willim said in a text on Wednesday. “Didn’t want people damaging their vehicles or getting hurt.”

The crew grabbed pylons and caution tape from their work truck to block off the most dangerous parts of the road. Then Willim and others slowed and redirected traffic for about an hour and a half before police arrived and took over, he said.

Signage and a detour were in place at Scurfield and Wittenberg Road overnight, Doig said, and city crews arrived to repair the hole early Wednesday morning. 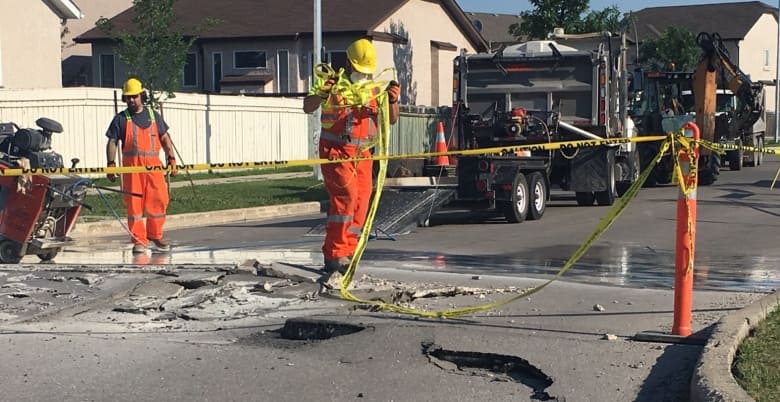 Dave Knapp, co-owner of Mudruckers, said he is proud his crew sprang to action before someone got hurt.

“They were right there when it happened,” he said. “They came to the rescue. We were giving them compliments this morning.”

Doig said she walks her dogs down Scurfield every day and there were no visible signs of damage at the surface.

“It just happened. There was no crackage,” she said. “I never saw that happen before.”

Though the scale of the heaving on Scurfield is something she’s never seen, Doig said the road quality in Whyte Ridge has deteriorated in recent years.

“We definitely have a problem with the road situation,” she said. “I think this is just the start of what’s going to happen. I think they’re atrocious in Whyte Ridge.”

It isn’t clear what caused the road to heave, although Winnipeg charted highs over 28 C on Tuesday.

CBC News asked the city for an explanation of what may have caused the concrete to heave but has yet to hear back.