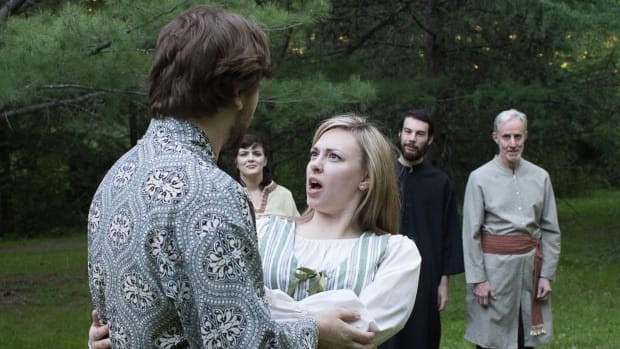 The Fredericton outdoor theatre company Bard in the Barracks is bringing back a crowd favourite and premiering a new-to-the-company show this season.

This year’s lineup includes a reboot of last year’s The Comedy of Errors in Barracks Square downtown and the lesser-known Cymbeline in Odell Park.

Director Len Falkenstein has been running the outdoor theatre company for 13 years.

Falkenstein said The Comedy of Errors was an audience favourite last year, but many of the performances were rained out, so the company is bringing it back with most of the original cast. 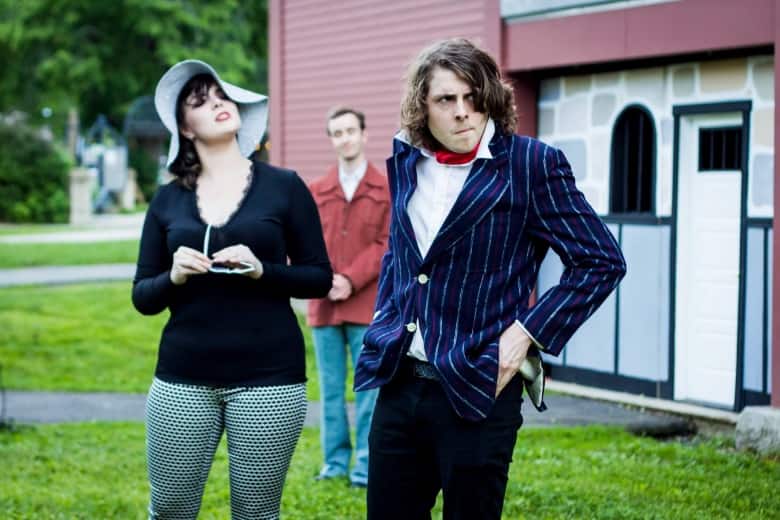 The Comedy of Errors is being rebooted after performances were rained out last year. (Michael Holmes-Lauder/Bard in the Barracks/Facebook)

The Bard’s production is set in the 70s and features lots of slapstick comedy.

Cymbeline has never been done before by Bard in the Barracks, and is one of Falkenstein’s favourite Shakespeare plays.

“It’s sort of a dark comedy and I’m sort of drawn to works that don’t fit easily into one genre.”

The play is set in Britain during a time of rebellion against Roman rule. Falkenstein describes it as a “Shakespearean fairy tale” full of tropes like the evil stepmother, a princess, forbidden love and infant kidnappings. 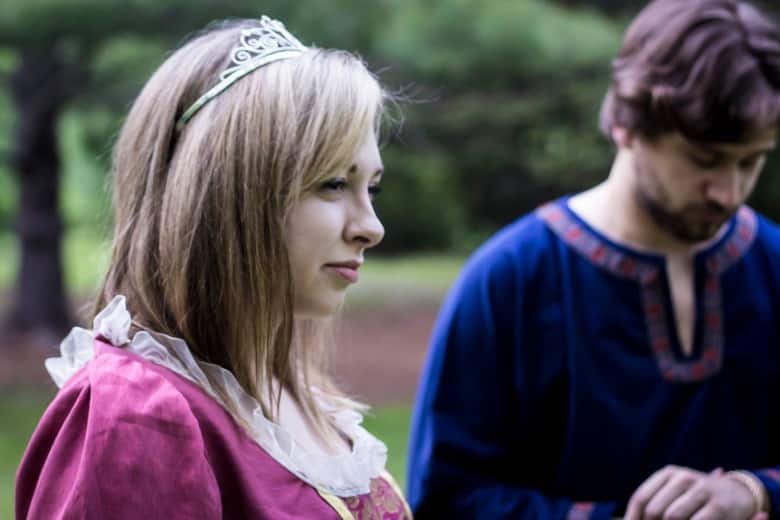 Kelly McAllister plays Princess Imogen, a damsel on a quest for her true love, in Cymbeline. (Michael Holmes-Lauder/Bard in the Barracks/Facebook)

Kelly McAllister plays Princess Imogen, the show’s damsel in distress on a quest for true love. She said audiences will recognize many themes from other Shakespeare works, including mysterious deaths, mistaken identities, disguises, romance and action.

“I always describe Cymbeline as sort of the greatest hits of Shakespeare, like if the Avengers were in Shakespeare because everything that’s in Shakespeare is in this show,” McAllister said.

The play’s wild outdoor setting makes directorial challenges, like a full-scale invasion of Britain by the Romans, easier to pull off. 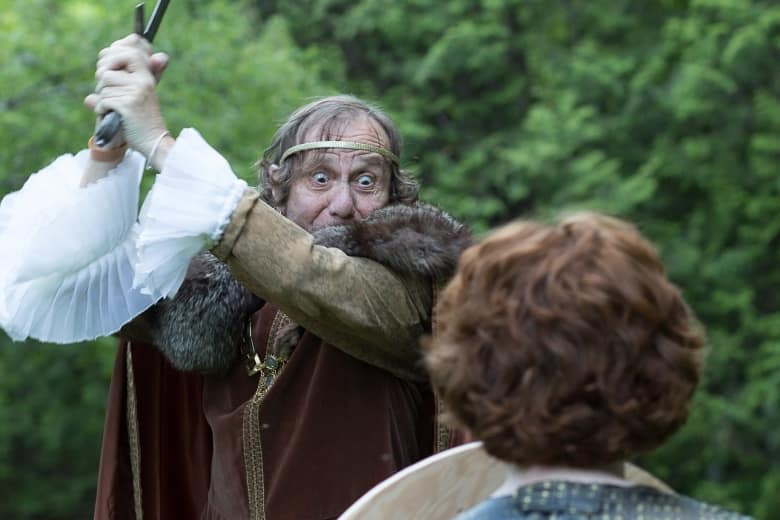 Cymbeline includes many fight scenes, including an invasion of Britain by Roman troops. ( Matt Carter/Bard in the Barracks/Facebook)

“You’re helped a lot by the fact that it’s pretty dark by the time that happens,” Falkenstein said.

“A few people can become many people.”

Outdoor theatre can be a double-edged sword though, with performances at the mercy of the weather. 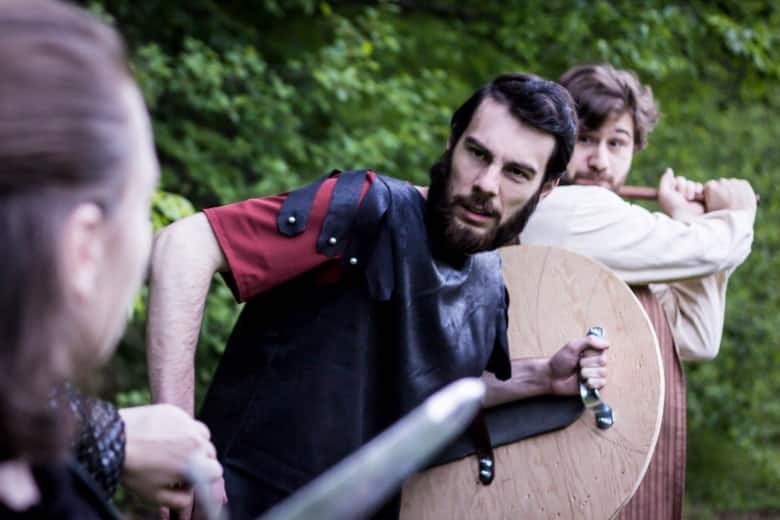 Holding a play outside comes with challenges, but director Len Falkenstein said even rain, which can sometimes cancel a show, can help make the experience more magical if the timing is right. (Matt Carter/Bard in the Barracks/Facebook)

Falkenstein said some shows have been performed in the rain, and others have been cancelled or interrupted halfway through.

However, rain can sometimes become part of the magic of an outdoor stage.

“If you talked to people that were there, even on nights where it rained a bit, they’d say, ‘Wow, that almost made it even better,'” Falkenstein said. 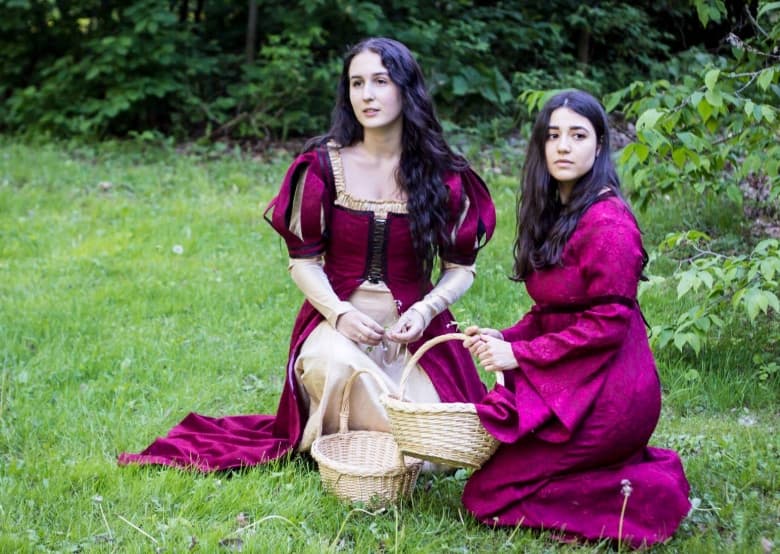 Performing in the park allows actors and audiences to immerse themselves in the story. (Matt Carter/Bard in the Barracks/Facebook)

McAllister said working on the production outdoors is “an actor’s dream.”

“It’s like you’re outside as a kid playing pretend.”

She said the park setting bridges the disconnect between the audience and the stage. 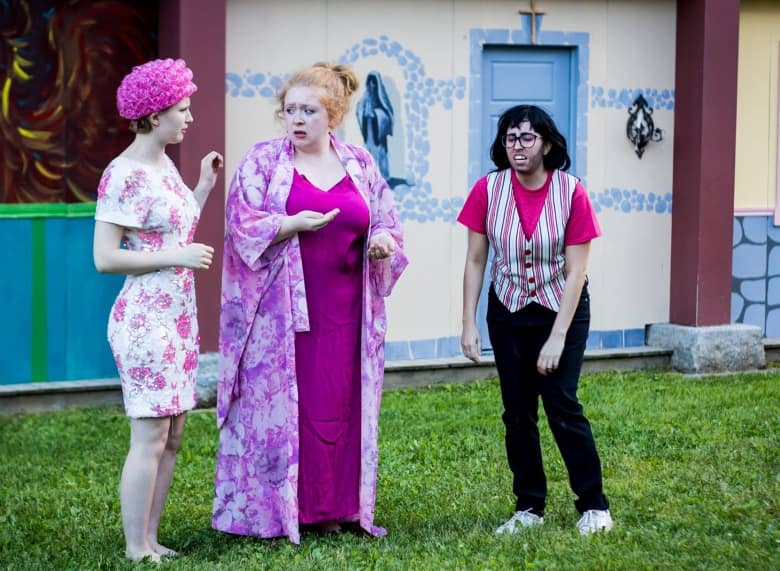 The performances in Barracks’ Square offer a more traditional theatre experience, with seating and a fixed location. (Michael Holmes-Lauder/Bard in the Barracks/Facebook)

The audience for The Comedy of Errors can expect a more traditional theatre experience, with bleachers and a fixed location.

Cymbeline, however, moves scene to scene throughout the park, so audience members are encouraged to be prepared and bring their own easily portable seating.

The plays run from June 22 to July 8. Tickets are available at the Bard in the Barracks website.