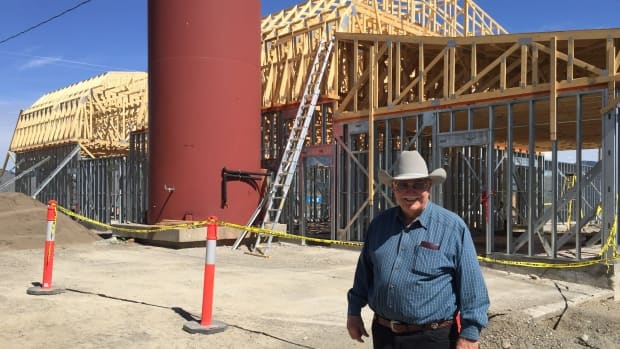 It was a late summer night in June, 2017, when Ted Blackwell, owner of Blackwell Dairy in Kamloops, B.C., heard two loud “booms.”

Blackwell and his wife, who live on the dairy property, hurried to their bedroom window to see what made the noise. Flames were coming from two trucks parked beside their dairy’s processing plant.

Blackwell Dairy was started in 1913 by Blackwell’s grandfather Milton. In 1983, the processing plant was built, and they were able to start creating a range of dairy products for sale in B.C.’s Interior.

Today, tourists tour the farm and facility to get a taste of how the century-old family business runs

“The flames just engulfed into the roof of the plant,” Blackwell said.

By the next morning, the plant had burned down.

Now, nearly one year later, Blackwell Dairy is on its way to operating once again.

The frame has been built, floors have been set and the roof is near completion, all in exactly the same spot as where the original building sat.

“I said right from that day, we will be rebuilding. I hadn’t even studied everything then but i just knew I was going to be rebuilding.”

‘You learn to be patient’

Along with processing milk from their own farm, Blackwell Dairy brings in milk from other dairy farms in the North Thompson and Shuswap Okanagan for processing and distribution.

Blackwell hoped the plant would be running before Christmas of 2017, but says complications with new regulations got in the way. Now, he’s aiming for September 2018.

“I never expected it to take this long, but after a while you learn to be patient.”

The fire gave the Blackwells a chance to make some changes to the business, structurally and operationally.

“We’re fairly well-covered with insurance, but not totally,” he said.

The new facility will have new windows, which Blackwell says will help tourists get a glimpse of operations inside the plant.

“We like to think that nobody can produce milk better than us, and we’re pretty proud of what we do,” he said. “That’s not going to change.”

With files from Jenifer Norwell