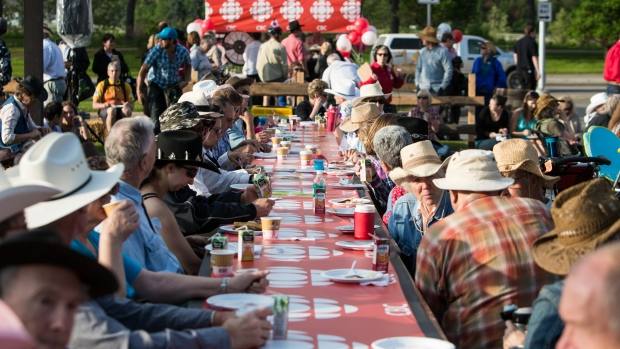 A long-standing CBC Stampede tradition is getting a shakeup.

After 30 years, the CBC Calgary team will not be hosting a pancake breakfast. Instead, CBC personalities will attend pancake breakfasts and other Stampede events in communities throughout the city, as well as on the Stampede grounds.

The change in tradition is a reflection of how the CBC, and Calgary, has evolved, says Suzanne Waddell, the CBC’s manager of communications, marketing and brand.

“We love the Stampede breakfast, but our recent move to a more modern facility kind of forces us to look at how we are actually connecting with the community,” she said.

“The reality is the breakfast started about 30 years ago and Calgary was a very different place back then. The city has grown and as it’s grown, CBC’s evolving too, so we want to go out to the new communities and meet residents in their neighbourhoods.”

CBC teams will be present at various breakfasts throughout the city to make it easier to meet more Calgarians, Waddell said.

As well, the CBC is launching a new contest, where Calgarians can win seats to watch the Stampede Parade from the balcony of the Marriott Hotel alongside the parade judges. Local hosts Doug Dirks and Angela Knight will also be hosting national coverage of the parade on CBC Television.

CBC teams will also be onsite daily at the Stampede grounds with both the morning and afternoon radio shows broadcasting live from the grounds on July 11.

Last fall, CBC Calgary moved from its home of more than 60 years on Westmount Boulevard N.W. to a new building at 1000 Veterans Place N.W.

The sale of the old location is currently in the process of being finalized.