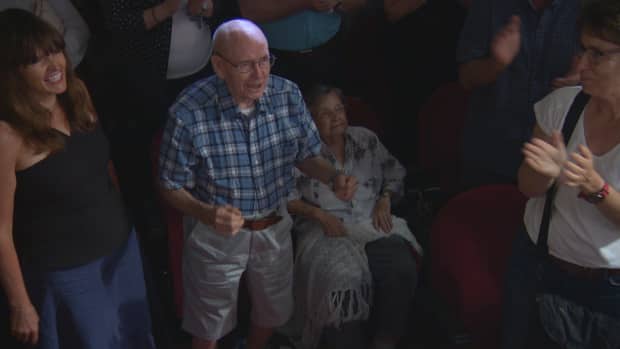 A 98-year-old man got a birthday surprise of a lifetime at the Royal Alexandra Theatre‎ Sunday when the cast of hit Canadian musical, Come From Away, sang him Happy Birthday at the end of their Father’s Day performance.

Harry Whalen, a great grandfather to four, leapt out of his seat for a standing ovation in the packed theatre before the cast sang to him with some members of the audience joining in.

“It was fantastic, I think. It surprised me,” Whalen said with a laugh.

The nonagenarian is a proud Newfoundlander and told CBC Toronto he loved the show, which portrays the tale of remote Newfoundland town Gander hosting over 6,500 passengers and crew that were diverted as a result of the Sept. 11 attacks. The Come From Away cast sings Happy Birthday to 98-year-old Harry Whalen at the Royal Alexandra Theatre. 1:44

Whalen watched the show with his wife of 68 years by his side.

His daughter Cynthia Whalen organized the big birthday surprise, and says she simply reached out to Mirvish to see if the cast would sing her dad Happy Birthday.

“I sent an email to Mirvish and it says they take three to four days to get back and they got back to me within an hour,” Cynthia Whalen said. “We can’t thank everybody enough.”

Last year, she says the family walked the CN Tower in the EdgeWalk for her dad’s 97th birthday. She isn’t sure what they’ll do next year.

But for now, Whalen is focused on savouring being 98 years young, a milestone he’ll officially mark on Monday.

“I have a lovely bunch of family. A man can’t have any more than what we have,” he said.