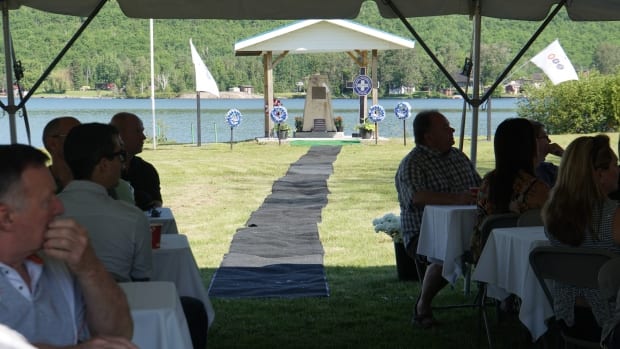 June 20, 1984, is a day that still resonates in the minds of many Sudbury residents and throughout the mining community.

About 200 workers were on shift at Falconbridge Mine that morning. Four of them never got out.

At 10:12 a.m., a seismic event that registered a 3.5 on the Richter scale struck the mine, causing a major rock fall and trapping many of the miners.

Despite rescue attempts over the next several days, Sulo Korpela, Richard Chenier, Daniel Lavallee and Wayne St. Michel each lost their lives.

On Wednesday, an annual service commemorating the 34-year anniversary of the tragedy was held at the Mine Mill 598 Unifor Campground at Lake Richard.

Four wreaths were lined up along the shoreline next to a plaque honouring fallen workers. 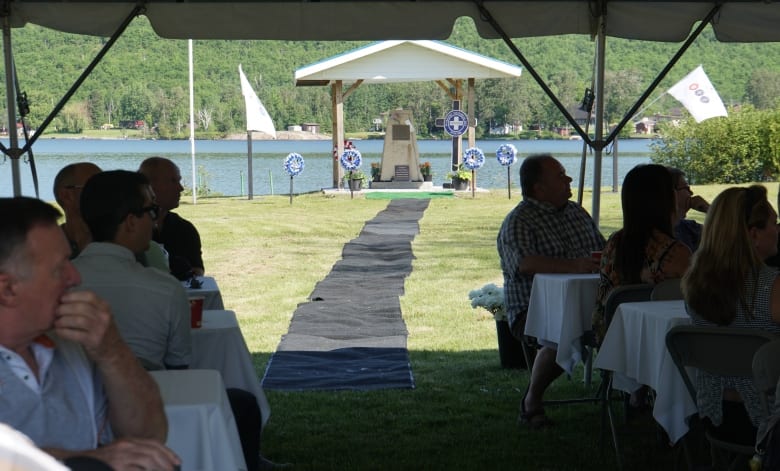 Four wreaths were lined up along the shore of Lake Richard during Wednesday’s memorial event held on the 34th anniversary of the Falconbridge Mine tragedy that took the lives of four workers. (Benjamin Aubé/CBC)

Among the speakers at the ceremony was union vice president Dave Stewart. He noted the tragedy spurred a number of changes in health and safety, work that continues to this day.

“Although much progress has been made in monitoring seismic activity in our mines, stemming from recommendations made by the Stevenson inquiry [into ground control and emergency preparedness in Ontario mines] in 1986, unfortunately, the risk of seismic events is still prevalent today in our mines,” noted Stewart.

The yearly memorial service in Sudbury has been expanded to honour all workers who have died on the job.

Also speaking at the ceremony was Sudbury businessman and lifelong resident, Geoffry Lougheed.

“There’s moments in time that sort of define a community or a society; for Sudburians, I think this day really stands out as a moment in time,” he said.

“People know where they were, they know what they were doing, because the tragedy and the size of the tragedy was so immense.” 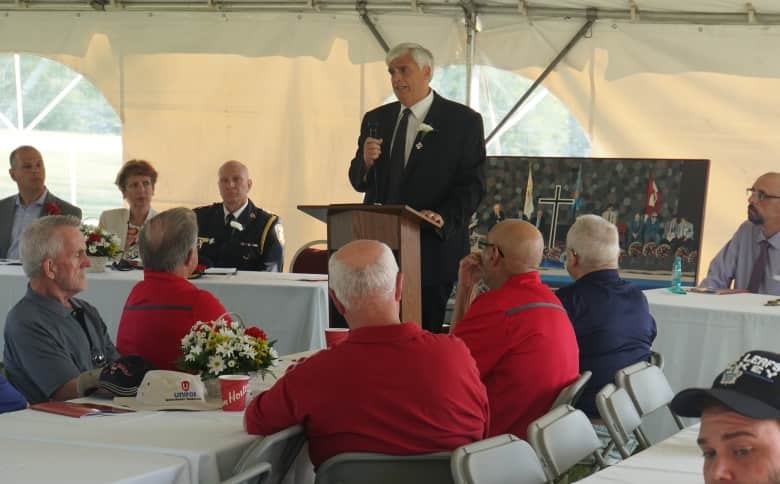 Sudbury businessman Geoffry Lougheed was one of the speakers at Wednesday’s memorial service, and looked back on what he called one of the most difficult days in Sudbury’s history. (Benjamin Aubé/CBC)

Ontario’s Ministry of Labour reports 14 on-the-job fatalities occurred over the first quarter of 2018, though none of those were in mining.

In 2017, the ministry registered a total of 54 workplace fatalities, with five coming from the mining sector. Those included the November 2017 death of 60-year-old Eulogio Gutierrez at Hemlo mine near Marathon, Ont.

Last year, Glencore — the company which eventually took over former Falconbridge operations after a series of buy-outs — pled guilty to Richard Pigeau’s 2015 death at Nickel Rim South mine in Sudbury.

This past January in Sudbury, 16 recommendations were issued by a jury after an inquest into the 2014 death of Vale smelter worker Paul Rochette.

In February, defunct mining company First Nickel was fined $1.3 million in connection to the deaths of workers Norm Bisaillon and Marc Methe, who were killed after a ground fall at Sudbury’s Lockerby Mine in 2014.

“Whether it’s the government, businesses, unions or individuals, we [have to make sure] we’re all kicking with the same foot to improve the system,” said Lougheed. “And I think in large part we do, but obviously, we’ve got work to do.”