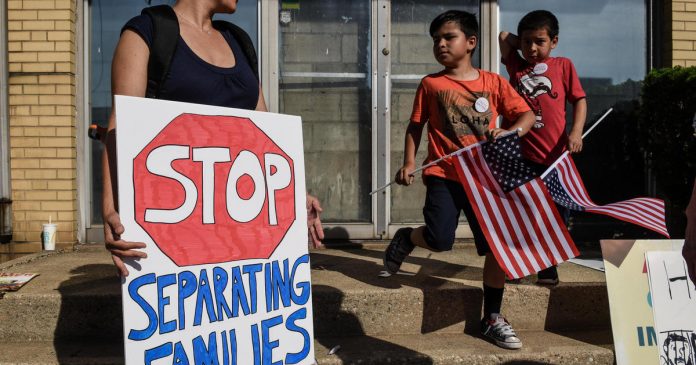 Trump administration officials say they have no clear plan yet on how to reunite the thousands of children separated from their families at the border since the implementation of a zero-tolerance policy in which anyone caught entering the U.S. illegally is criminally prosecuted. “This policy is relatively new,” said Steven Wagner, an acting assistant secretary at the Department of Health and Human Services “We’re still working through the experience of reunifying kids with their parents after adjudication.”

Federal officials say there are some methods parents can use to try to find their children: hotlines to call and an email address for those seeking information. But advocates say it’s not that simple.

In a courtroom near the Rio Grande, lawyer Efren Olivares and his team with the Texas Civil Rights Project frantically scribble down children’s names, birthdates and other details from handcuffed men and women waiting for court to begin. There are sometimes 80 of them in the same hearing.

The Texas Civil Rights Project works to document the separations in the hopes of helping them reunite with the children.

A woman from El Salvador says she hasn’t spoken to her 8-year-old son in a month, since immigration officials separated them after they crossed the U.S.-Mexico border to seek asylum. (June 19)

They have one hour to collect as much information as they can before the hearing begins. The immigrants plead guilty to illegally entering the U.S., and they are typically sent either to jail or directly to an immigration detention center. At this point, lawyers with the civil rights group often lose access to the detainees.

“If we don’t get that information, then there’s no way of knowing that child was separated,” Olivares said. “No one else but the government will know that the separation happened if we don’t document it there.”

Olivares has documented more than 300 cases of adults who have been separated from a child. Most are parents, but some are older siblings, aunts, uncles or grandparents. Some are illiterate and don’t know how to spell the children’s names.

More than 2,000 minors have been separated from their families since early May. The children are put into the custody of the U.S. Department of Health and Human Services with the aim of keeping them as close to their parents as possible and reuniting the family after the case goes through the courts, said Wagner.

But it’s not clear that’s working.

According to Olivares, the agency is generally “very willing to help,” often helping to find a child even if there’s a misspelling in the group’s records. But if a child has been transferred out of a government shelter — including if the child has been deported — agency representatives won’t give any information.

“Sometimes the parent gives us contact information for a relative,” Olivares said. “If they have the phone number right and the phone number is working … we call that number and sometimes we’re able to locate that relative and ask them what they know.”

In May, the Department of Justice adopted the zero-tolerance policy in which anyone caught entering the U.S. illegally is criminally prosecuted. Children can’t be jailed with their parents. Instead, after the adult is charged, children are held briefly by Homeland Security officials before being transferred to Health and Human Services, which operates more than 100 shelters for minors in 17 states.

The department has set up new facilities to manage the influx of children, and Wagner said they were prepared to expand as more children come into custody.

The children are classified as unaccompanied minors, a legal term generally used for children who cross the border alone and have a possible sponsor in the U.S. willing to care for them. Most of the more than 10,000 children in shelters under HHS care came to the U.S. alone and are waiting to be placed with family members living in the U.S.

But these children are different — they arrived with their families.

“They should just give the kids back to their parents. This isn’t difficult,” said Lee Gelernt of the American Civil Liberties Union.

Gelernt represents a Brazilian asylum seeker in a closely watched lawsuit that seeks a nationwide halt to family separation. The woman, identified as Mrs. C in court documents, was split from her son for nearly a year after entering the country illegally in August near Santa Teresa, New Mexico.

On Tuesday, Olivares’ team had seven people left to interview with five minutes left. They took down just the names, dates of birth, and countries of origin of the children.

“One woman (said), ‘What about me, what about me?'” Olivares said a few hours later. “She wanted to give us information because she realized what we were trying to do.”