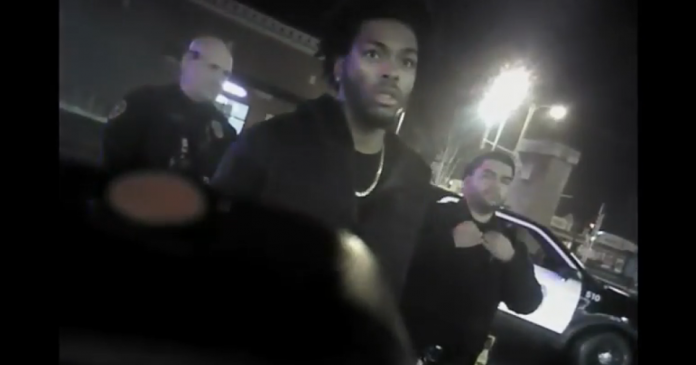 MILWAUKEE — Milwaukee Bucks guard Sterling Brown filed a lawsuit Tuesday against the city of Milwaukee and its police department, claiming unlawful arrest and excessive force when officers used a stun gun on him during his arrest for a parking violation. Brown’s attorney Mark Thomsen filed the lawsuit in federal court.

Brown had been talking with officers while waiting for a citation for illegally parking in a disabled spot outside a Walgreens on January 26 when officers took him down because he didn’t immediately remove his hands from his pockets as ordered.

Brown was briefly jailed, but never charged with a crime. Hours after the incident, he played in an NBA game with bruises on his face.

Police Chief Alfonso Morales apologized to Brown last month when body-camera video of the arrest was released. Three officers were disciplined, with suspensions ranging from two to 15 days. Eight other officers were ordered to undergo remedial training in professional communications.

Video of the confrontation shows an officer approached Brown around 2 a.m. When their conversation becomes tense, the officer calls more squad cars for help and eventually eight officers are standing around Brown. One asks him to take his hands out of his pockets and a second or two later the scuffle begins. Almost immediately, an officer yells: “Taser! Taser! Taser!”

According to the lawsuit, one of the officers later took to Twitter to mock Brown, saying, “Nice meeting Sterling Brown of the Milwaukee Bucks at work this morning! Lol#FearTheDeer”

Police only released the body camera video of the first officer who contacted Brown. But additional body camera and squad car videos, obtained by Milwaukee station WISN-TV, showed the moments after officers used a stun gun on Brown. In one, Brown is on the ground and handcuffed when an officer puts one of his boots on Brown’s ankle, holding it there. Brown doesn’t mention being in any discomfort but he questions the officer’s actions.

“C’mon man, you’re stepping on my ankle for what?” Brown said. In response, the officer said he was trying to prevent Brown from kicking anyone.

Video released earlier this month also appeared to show that the officers involved were worried about a possible backlash. The body camera video obtained by WISN-TV showed officers expressing concern over the perception of Brown’s arrest.

Another is heard saying, “We’re trying to protect ourselves.”

In another new video, an officer appears to call a supervisor to request overtime pay. “I need to go on the overtime board if I’m not already,” he said.

Brown told the Journal Sentinel in an interview last month that he “gave in” when police used a stun gun and that he didn’t do anything to resist because he didn’t want officers to “pull out their guns.”

“I was just being smart. I just wanted to get out of the situation and get home,” he said.