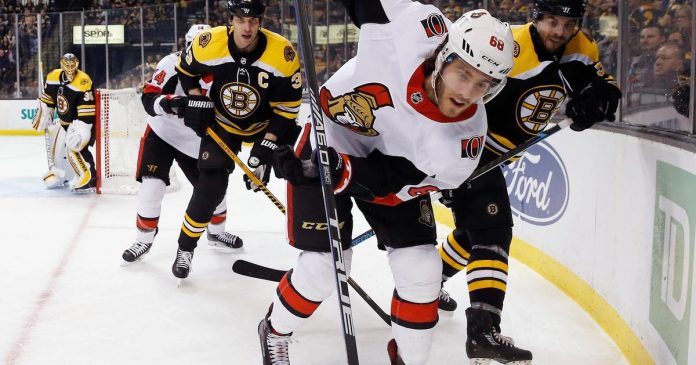 SUNRISE, Fla. — The Florida Panthers have acquired Mike Hoffman from San Jose hours after the Sharks got the scoring winger from the Ottawa Senators. The Senators were eager to deal him amid a dispute between him and his fiancee and Senators captain Erik Karlsson and his wife.

Florida sent 2018 fourth- and fifth-round picks and a 2019 second-round pick to San Jose for Hoffman and a 2018 seventh-round pick. General manager Dale Tallon announced the trade Tuesday, not long after Ottawa moved him to San Jose. In Hoffman, the Panthers get a scoring winger at a bargain-basement price.

Melinda Karlsson filed an order of protection against Monika Caryk, claiming Caryk posted hundreds of derogatory online messages aimed at her and her husband.

Karlsson also claimed that Caryk “uttered that she wished I was dead and that someone should ‘take out’ my husband’s legs to ‘end his career.'” After the allegations came to light, the Senators said in a statement that it was investigating in cooperation with the NHL.