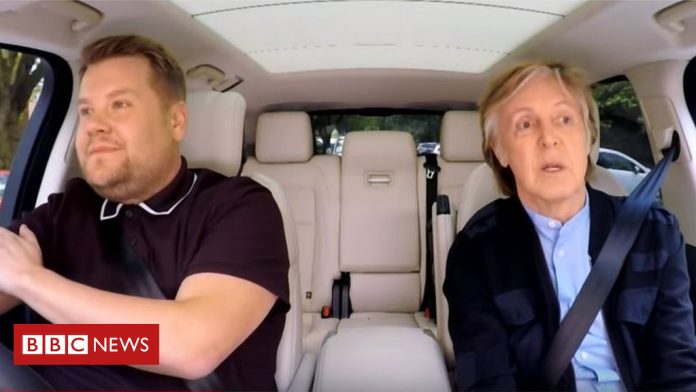 A special UK edition of Carpool Karaoke took an emotional turn as Sir Paul McCartney joined James Corden on a trip to Liverpool.

The Late Late Show host was joined by the singer as they drove past famous Beatles landmarks.

McCartney told how a dream, in which his mother told him to “let it be”, inspired the song of the same name.

Corden said it was the “most beautiful story” he had ever heard, before singing a teary rendition of the song.

“Oh man, it got me emotional there,” Corden said. “I didn’t feel it coming.”

McCartney recalled how he “had a dream in the ’60s where my mum, who died, came to me in the dream and was reassuring me, saying, ‘it’s going to be OK. Just let it be.'”

He added: “She gave me the positive word. So I woke up and I went: ‘What was that? What’d she say? Let it be? I’ve never heard that. That’s kind of good.'”

Explaining why the story made him so emotional, Corden said: “I can remember my grandad, who was a musician, and my dad, sitting me down and saying, ‘we’re going to play you the best song you’ve ever heard’.

“And I remember them playing me that. If my grandad was here right now, he’d get an absolute kick out of this.”

McCartney made it even more poignant when he told Corden: “He is.”

During the drive, Corden told McCartney: “Your music is so full of positivity and joy and a message of love and togetherness, I feel like it’s more relevant now today maybe than it’s ever been.”

He agreed, saying: “We expected it to last 10 years, but it keeps going on, and on, and on. And it keeps being relevant.”

McCartney also revealed how he wrote his first song at the age of 14.

As part of the video, the pair embarked on a journey around McCartney’s hometown, visiting Penny Lane and his family home, which he saw for the first time in 50 years.

They then ended the visit with a surprise performance for a small crowd in a Liverpool pub.