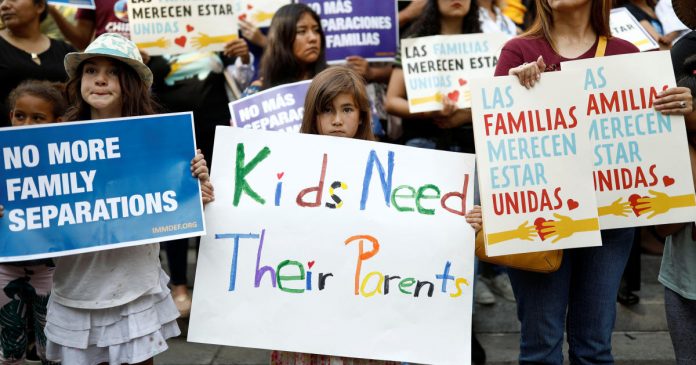 After repeatedly suing the Trump administration over U.S. immigration policies, California will find itself in an unusual position Wednesday: defending protections for people in the country illegally against a court challenge by the federal government. U.S. Judge John Mendez in Sacramento will hear arguments from attorneys for the state and the U.S. Justice Department about a federal request to block three California laws. He was not expected to rule immediately.

One of the laws requires the state to review detention facilities where immigrants are held. Another bars law enforcement from providing release dates and personal information of people in jail, and the third bars employers from allowing immigration officials on their premises unless the officials have a warrant.

The laws, two of which went into effect in January, follow President Donald Trump’s promises to ramp up deportations. The administration has tried to crack down on so-called sanctuary jurisdictions by restricting funding if they refuse to help federal agents detain and deport immigrants.

California, which this year became the second “sanctuary state,” has resisted that move. The state has filed more than 50 lawsuits against the Trump administration, mostly over immigration and environmental decisions, and notched some significant court victories.

The hearing comes amid scrutiny of the administration’s “zero tolerance” policy on illegal U.S. crossings, leaving hundreds of children separated from their families.

The federal government says in its lawsuit against California that the U.S. Constitution gives it pre-eminent power to regulate immigration, and the state can’t obstruct immigration enforcement efforts.

In challenging the three state laws, federal officials say they need inmate information to safely take custody of people in the country illegally who are dangerous and need to be removed. The law on detention facility inspections could lead private contractors to stop holding immigrants, and the restriction on accessing businesses eliminates a “critical enforcement tool” to fight illegal employment, they say.

“Separately and in concert, the challenged provisions have the purpose and effect of impeding enforcement of the immigration laws and impermissibly discriminating against the United States,” Justice Department attorneys said in court documents.

The administration is trying to assume powers that have long been understood to belong to states and cannot show that California’s policies are causing harm, the state said in court documents.

There is no evidence that the law barring release dates and personal information is causing more dangerous immigrants to be freed or that detention facilities intend to end their contracts with the federal government because of the inspection requirement, California said.

It notes that the law restricting access to work sites explicitly authorizes compliance with inspections of employment records to make sure employees are allowed to work in the U.S.

California has moved to dismiss the lawsuit. Mendez, who was nominated to the federal bench in 2007 by Republican President George W. Bush, also planned to hear arguments about that request Wednesday.

“The laws reflect the Legislature’s best determinations on a number of critical issues, such as how the state provides for public safety, protects workers and the workplace, and safeguards all residents’ rights,” California said in its motion to dismiss the lawsuit.