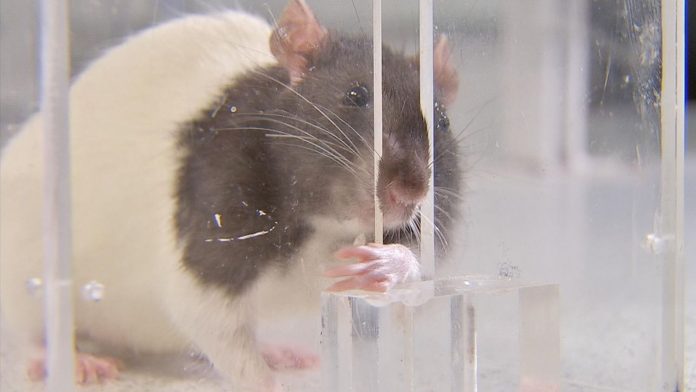 Scientists have “cured” paralysed rats with gene therapy – in a breakthrough that offers hope to people who have suffered spinal injuries.

The rats, which had been unable to move their limbs properly, regained their ability to reach, grasp and feed themselves following the test.

Researchers tested the gene therapy on rats with spinal cords that had been bruised to mimic the typical injury humans suffer in car accidents or falls.

Professor Elizabeth Bradbury, who led the research, said the rats quickly regained basic control of their limbs after being injected with the gene, with more precise movements taking a little longer.

“In some of the tests we looked at – such as gripping the rungs of a ladder – the treatment worked within one to two weeks,” she told Sky News.

“Other tests, such as picking up objects, needed very skilled muscle function.

“They need to be able to reach, grip, turn the wrist and lift it back.

“Those took a much longer period of time – we started seeing recovery in five to six weeks.”

The scientists, from the Institute of Psychiatry, Psychology and Neuroscience at King’s College London, injected a gene that makes an enzyme called chondroitinase into the damaged spinal cord.

The enzyme breaks down the scar tissue that seals the ends of damaged nerve fibres. This allows nerves to grow, reconnecting the spinal cord and restoring muscle movement.

Results published in the journal Brain showed the treatment worked in rats with recent injuries.

But scientists are now repeating the experiment on animals with injuries up to a month old, with more scar tissue.

The researchers have warned they are still a long way off carrying out clinical trials and they need to make sure the treatment does not have side effects.

They have built in a “gene switch” as a safeguard, so the enzyme is only active when the rats are given a common antibiotic in their drinking water. Remove the antibiotic and the gene switches off.

Studies will be carried out on pet dogs that have been injured in accidents. If successful, trials in humans will follow.

Tara Stewart, who was paralysed from the neck down four years ago after falling from a horse, says she firmly believes that treatment will one day restore at least some muscle control.

“The biggest thing for me is a lack of independence,” she told Sky News.

“If I had use of my hands that independence would be restored.

“I would be able to look after myself, cook and feed myself, and do all of those things that most people would do without even thinking about.

“That would be a huge thing for me.”

The study was funded by the Medical Research Council, the International Spinal Research Trust and Wings for Life.