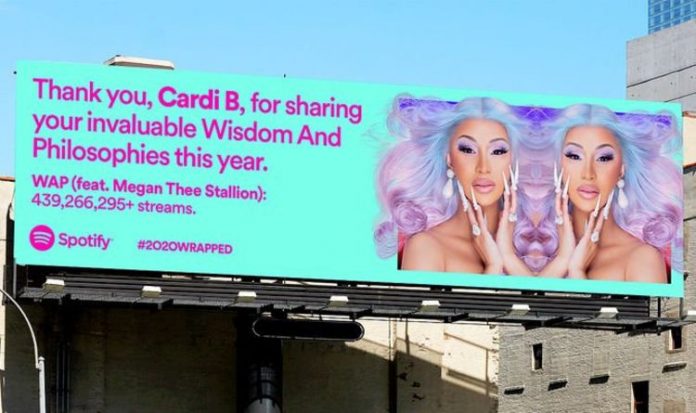 December has arrived and we’re getting close to the end of 2020. To celebrate what has been – by anyone’s standards, a pretty gruelling year – Spotify has launched its annual Wrapped feature, which brings together all of the artists and podcast creators that kept Spotify subscribers entertained this year.

As you’d expect, 320 million Spotify listeners have turned to nostalgia-themed and work-from-home-themed playlists, which both saw a colossal spike over the last 12 months. Podcast fans used the Spotify app to find shows about wellness, including Unlocking Us with Brené Brown and Get Sleepy: Sleep meditation and stories. Spotify also noted that more people created playlists from home, instead of on-the-move, this year. The last 12 months also saw a spike in the number of people streaming their music library from a games console.

When it comes to the biggest artists of the year, Bad Bunny has been named was the most-streamed artist of 2020. The Puerto Rican rapper clocked-up an eye-watering 8.3 billion streams from Spotify users. Following Bad Bunny is Drake (who is top in the UK) and the third most-streamed artist of the year is J Balvin, followed by the late rapper Juice WRLD and The Weeknd.

But while Bad Bunny is the most-streamed artist, the individual song that clocked-up the most streams goes to The Weeknd. The most-streamed song of 2020 both globally and in the UK was “Blinding Lights” by The Weeknd, racking up almost 1.6 billion streams this year. In the second and third spots respectively globally are Tones And I’s “Dance Monkey” and Roddy Ricch’s “The Box.” The fourth most-streamed song of the year is “Roses – Imanbek Remix” by Imanbek and SAINt JHN, followed by Dua Lipa’s “Don’t Start Now.”

The most-streamed album globally of 2020 is Bad Bunny’s YHLQMDLG with over 3.3 billion streams, followed by The Weeknd’s After Hours and Post Malone’s Hollywood’s Bleeding. Rounding out the list of top albums are Harry Styles’ Fine Line and Dua Lipa’s Future Nostalgia. However, for the UK, the most-streamed album is Lewis Capaldi’s Divinely Uninspired To A Hellish Extent.

The year’s most popular Spotify editorial playlist is Today’s Top Hits, which has more than 27M followers.

The Joe Rogan Experience takes the number one slot for the most popular podcast of the year both globally and in the UK. Coming in second and third are TED Talks Daily and The Daily, showing that listeners were staying in the know as usual. The fourth most popular podcast is The Michelle Obama Podcast, followed by the comedy/advice show Call Her Daddy.

Spotify acquired the exclusive rights to The Joe Rogan Experience earlier this year. Given the latest streaming statistics, it seems like that was a canary business move. Although the exact terms of the acquisition were not disclosed, widespread reports suggested that the acquisition deal makes Joe Rogan the highest-paid podcast creator worldwide. Rogan announced the deal with Spotify back in May, revealing his show would debut exclusively on Spotify in September. At the time, one calculation suggested Rogan’s revenue from adverts alone would be between $50m (£41m) and $250m, with more coming from YouTube, where Rogan’s shows regularly clock-up millions of views.

Add a premium for exclusivity on top of that and it seems Spotify really dug-deep in their podcasts to bring the comedian to its platform.

If you’re hoping to find out what you spent the year listening to… unfortunately, you’ll need to wait a little longer. Spotify teases “don’t forget to check out the Wrapped microsite in the coming days to see your personal favourites and receive a playlist based on your tastes.”

For those who haven’t held a Spotify subscription for an entire calendar year before, Spotify Wrapped sees the music streaming service put together a number of statistics based on your listening habits, including favourite artists, the amount of time you’ve spent listening to certain songs, and more. The Wrapped 2020 playlist brings together your most-streamed tracks of the year.

Apple Music has a similar feature, which debuted at the start of the year. Instead of following the model popularised by Spotify, Apple slowly builds your playlist over the course of the year. While that might be less exciting than Wrapped 2020, it does mean that you’ll be able to see how your tastes evolve throughout the year.

Here is the complete breakdown of the most-streamed tracks, artists and albums on Spotify: