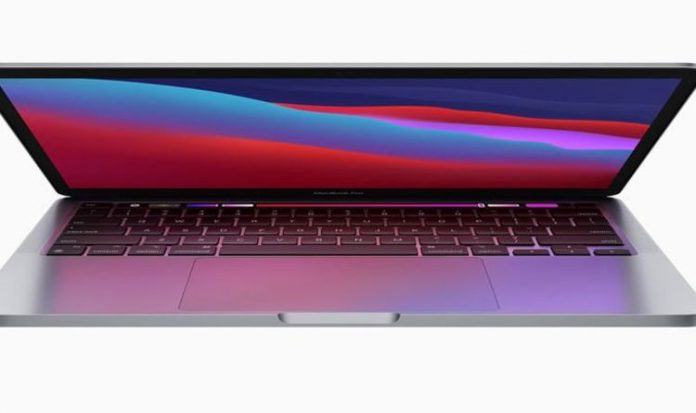 MacBook fans have a new laptop to consider and this portable powerhouse boasts the longest ever battery life in a Mac. The all-new 13-inch MacBook Pro has just been revealed at Apple’s “One more thing” event and is the first in the range to be powered by the firm’s own M1 processor.

Moving away from the usual Intel power means Apple has created a MacBook which is far more efficient with the company boasting that users can expect a whopping 20-hours of video playback or 17 hours of web browsing on a single charge.

Along with that extended battery, it also looks like users will get plenty of oomph for their daily digital tasks.

Apple says that the 8-core CPU, when paired with the MacBook Pro’s active cooling system, is up to 2.8x faster than the previous generation, delivering game-changing performance when compiling code, transcoding video, editing high-resolution photos, and more.

The 8-core GPU is also up to 5x faster, allowing users to enjoy super-smooth graphics performance whether they are designing a graphics-intensive game or a new product.

Other new features in the new 13-inch MacBook Pro include studio-quality mics and Apple’s latest camera ISP in the M1 chip enables sharper images and more detail in shadows and highlights on video calls.

And it features two Thunderbolt ports with USB 4 support to connect to more peripherals than ever, including Apple’s Pro Display XDR in full 6K resolution.

The new 13-inch MacBook Pro is the ultimate expression of what the M1 chip can do. And it is available for the same starting price of just £1299 and even lower for education customers.

“The introduction of three new Macs featuring Apple’s breakthrough M1 chip represents a bold change that was years in the making, and marks a truly historic day for the Mac and for Apple,” said Tim Cook, Apple’s CEO. “M1 is by far the most powerful chip we’ve ever created, and combined with Big Sur, delivers mind-blowing performance, extraordinary battery life, and access to more software and apps than ever before. We can’t wait for our customers to experience this new generation of Mac, and we have no doubt it will help them continue to change the world.”