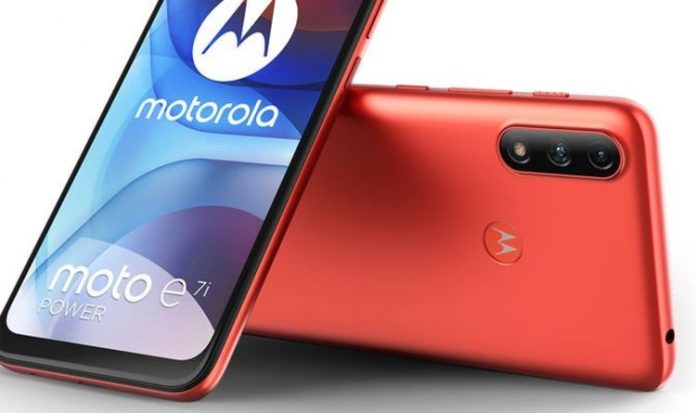 Last week, Motorola announced the release of its feature-packed Moto G10 and G30, which include impressive designs, triple rear cameras and huge batteries for two days of power on a single charge. The G30 even includes fast charging and an impressive 6.5-inch Max Vision HD+ screen which is not only bright and colourful but also features a fast 90Hz refresh rate for silky smooth scrolling. Prices for these devices start from just £130. At the time, that seemed ludicrously cheap… but that’s until you see what’s coming next from the technology firm.

Motorola has just announced the launch of its new moto e7i power which can be yours for just £79. Yes, you did read that correctly!

And don’t think for one minute that the budget price means bargain-basement specs as the moto e7i power gets some pretty impressive features. For your cash, you’ll be treated to a 6.5″ Max Vision HD+ with a 20:9 aspect for a cinema-style viewing experience.

There’s also an octa-core 2.0 GHz processor and giant 5,000mAh battery which Motorola is boasting will allow users to stream music for 76 hours, watch video for 14 hours, or browse the web for 12 hours on a single charge.

Light usage should also see this giant power pack last for at least two days without needing to go near a plug, Motorola has claimed.

For photography fans, there’s a dual-camera system on the rear case which features a Macro Vision lens to help users get closer to the action. A 5-megapixel front-facing camera is also tucked inside the edge-to-edge screen for those all-important selfies.

Other features include 32 GB of built-in storage and if you need more space, you can always add up to 1 TB more by adding a microSD card.

A fingerprint reader is discreetly located within the “batwing” logo on the back of the phone plus there’s a dedicated Google Assistant button on the side for instant voice search.

The new moto e7i power will be available in colours including Tahiti Blue and Coral Red. UK retailers that will stock the phone include Amazon, Argos, JLP and Tesco with it becoming available in the coming weeks.