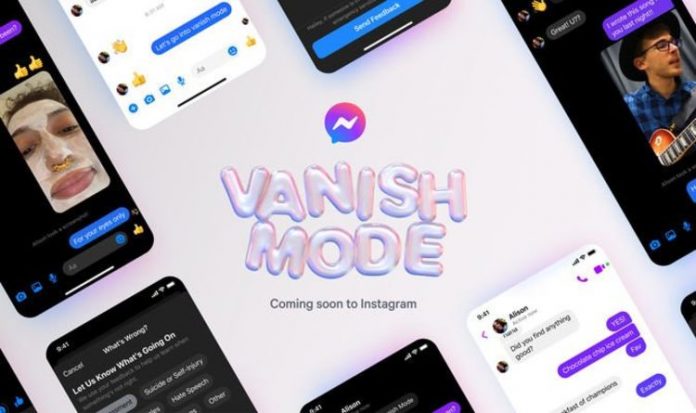 Instagram and Messenger have gained a new feature that’ll be familiar to those who chat with friends and family using WhatsApp. Dubbed “Vanish Mode”, text messages will be automatically deleted as soon as they are viewed and the recipient leaves the chat. That’s a little faster than you’ll get with WhatsApp, which keeps the messages for seven days before they vanish.

WhatsApp, which is owned by Facebook – just like Instagram and Messenger, says it set a seven-day limit to ensure that “you don’t forget what you were chatting about”. It’s unclear why parent company Facebook decided that WhatsApp users needed a week of past messages to catch-up on before they vanished, while texts sent inside Messenger and Instagram disappear immediately. But if you’re going to add a mode focused on disappearing messages, it seems to make sense to make the texts disappear pretty quickly – not in a week.

Ephemeral messages were popularised by Snapchat, which allows users to send text messages, photos and videos that disappear when users leave the chat window. Stories, which are a collection of images, video, and text cards that vanish after a 24-hour period, have also come to WhatsApp, Instagram and Messenger after being popularised by Snapchat.

With the addition of “vanishing messages” in Instagram and Messenger, Facebook has now brought the feature to its trio of chat services.

You will be notified whenever someone takes a screenshot when chatting in vanish mode, which is a nice security feature. Just like with Snapchat, there’s no built-in feature to prevent people from using a camera – or another smartphone – to take a photo of what is happening on-screen.

It seems that Facebook assumes users will swipe-up to enter and exit Vanish Mode whenever they want to start sharing something confidential. However, it’s worth noting that – by default – neither Messenger nor Instagram use end-to-end encryption by default. So, you might not want to use these services for anything too, ahem, confidential.

If you want to opt-in for end-to-end encrypted chats, you’ll need to use the secret conversation feature baked into Messenger. If not, Vanish Mode is slowly rolling out to users worldwide right now, starting with the United States. It might take some time to land on your smartphone, so be patient.

Facebook has already confirmed plans to unify the underlying technology that powers its Messenger, WhatsApp and Instagram chat functions. That seems to be taking much longer than originally planned, however, the arrival of Vanish Mode across its three platforms within weeks shows its push to standardise the messaging features across the three apps.