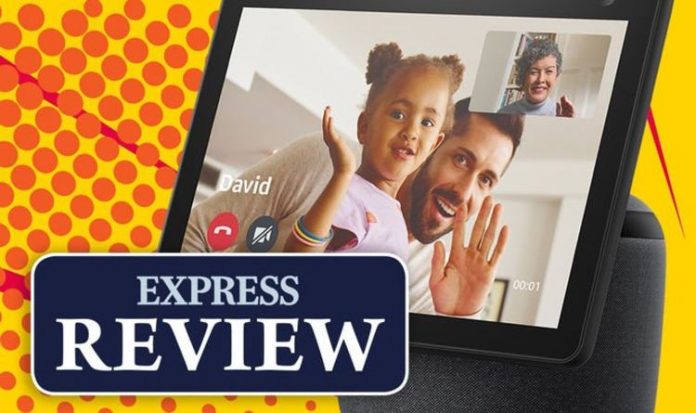 Amazon is back with a brand-new Echo and this latest smart speaker includes a pretty bizarre twist. Echo Show 10 packs a pin-sharp 10.1-inch touchscreen, which might not sound like anything new. After all, Amazon has been making speakers with displays for over three years. However, what’s different about its latest touchscreen-enabled Alexa gadget is that the display actually follows you around the room. Yes, you did read that correctly. As you meander around the kitchen, the screen on the Echo Show 10 will whirr around to keep track of your movements.

Amazon says this means as you head to the fridge to grab a beer or let the dog in through the backdoor, you’ll always be able to see what’s displayed on the Echo Show 10’s screen. So, you can quickly glance to check the weather, see a reminder, or follow along with a cooking tutorial.

The concept of always having the ideal viewing angle as you watch movies on Prime Video and or chat with relatives on video calls might sound quite appealing …having put this new technology to the test in our home, Express.co.uk is not at all convinced it’s something we need in our lives.

Despite Amazon confirming its Show 10 doesn’t actually track, store or send any data from the camera that enables this movement tracking back to its HQ in Seattle – the whole thing still feels a bit creepy and (worse still) all slightly pointless. Once you use the wake word “Alexa,” the in-built camera hones in on what it recognises as a human face.

READ MORE: Fire TV users who missed out on colossal upgrade last year don’t have much longer to wait

The Amazon Echo Show 10 will follow you around the room (Image: AMAZON)

This then allows the screen to swivel to find the source of the sound – following what it believes was the source as you move around the room.

Once the interaction is over the display resets itself to set position ready for the next time you bark an order at Alexa. To be fair to the design team at Amazon, this all works pretty well and the fact that it’s so quiet is a clever piece of engineering.

During our testing, the screen spun when we asked it to and locked onto our face with a pretty high level of accuracy. But it doesn’t get things right all of the time.

We found it can get confused when two people are close together and there was the odd instance where it appeared to get a mind of its own turning in completely the wrong direction which is highly irritating.

We’ve always liked the concept of the Echo Show but for most homes, this new device simply feels like a step too far.

If you’re a Premier League footballer and live in a palatial-style mansion this spinny speaker might make more sense but for the average family semi, we really don’t see the point of a display that moves. In fact, during our testing, we found we’d rather have had a standard static Echo Show in the kitchen. Considering you can pick up the Echo Show 5 for just £39.99 right now, the £239.99 Echo Show 10 feels like a pretty expensive gimmick.

One final criticism is the lack of video calling support for other platforms. Amazon says that Zoom integration is coming in the future but there’s no way to make calls via popular services such as WhatsApp, FaceTime or Hangouts. Given Facebook (which owns WhatsApp) and Google (which owns Hangouts) both have their own screen-equipped smart home devices competing with the Echo Show… we don’t expect to see those making an appearance on this rival gadget anytime soon.

In many ways, it’s a shame we’ve been left disappointed by the Echo Show 10 as there are actually numerous features to love on this smart speaker.

That glorious 10.1-inch screen is bright, colourful and pin-sharp plus you get excellent sound from the directional speakers which are tucked inside the base. These are easily good enough to fill a room with music and the bass adds plenty of punch to your favourite playlist.

The 13-megapixel in-built camera has also been upgraded to offer those crystal clear video calls and you can also access it remotely for an instant 360-degree view of your home straight on your smartphone.

As long as you’re not freaked out by watching the inside of your property via your Echo this is a nice feature that could give you peace of mind when we all get out of lockdown.

Of course, the Show 10 is powered by Alexa who remains one of the best virtual assistants on the market with simple voice commands showing the latest news reports, football scores and even things such as easy to follow recipes and your family photo albums on the screen.

Amazon Echo Show 10 is released in the UK (Image: AMAZON)

The display can also be used to watch videos from services such as Prime Video, BBC and YouTube plus karaoke-style lyrics will pop up when listing to tunes from Prime Music.

Like the Amazon Echo, there’s also a Zigbee hub built-in, so you won’t need to plug any extra hubs into your router as you buy Philips Hue smart bulbs, or any number of other connected home gadgets – the Echo Show 10 handles all of the set-ups so all of your new kit should work straight out of the box.

Sorry Amazon, but the Echo Show 10 isn’t for us. While we’ve been impressed with the design and the almost-silent gear system that powers the whole thing… the whole thing seems hell-bent on solving a problem that just doesn’t exist.

The Echo Show 10 does include some impressive audio and great visuals on the sharp touchscreen display, but you are paying a premium for a gimmick we’re not sure most homes need. Not to mention, a gimmick that doesn’t always work when two or more people are in the room.

Now, that’s not to say some won’t love the twisting screen tech, but we’d rather stick to those standard Show models which are both cheaper and stay perfectly still. If you live in a luxury home with rooms the size of the Albert Hall and constantly find yourself looking at the wrong side of your smart home gadgets… the Show 10 might make more sense.

For everyone else, we’d recommend the excellent Echo Show 5 (currently £39.99) or the Echo Show 8 (currently £64.99). Both of these have touchscreens to enable video calls, step-by-step cooking tutorials, and more. And if you can’t see the screen sometimes – don’t worry, Alexa was originally designed as a voice assistant, so will still easily be able to read out the answer to your question.