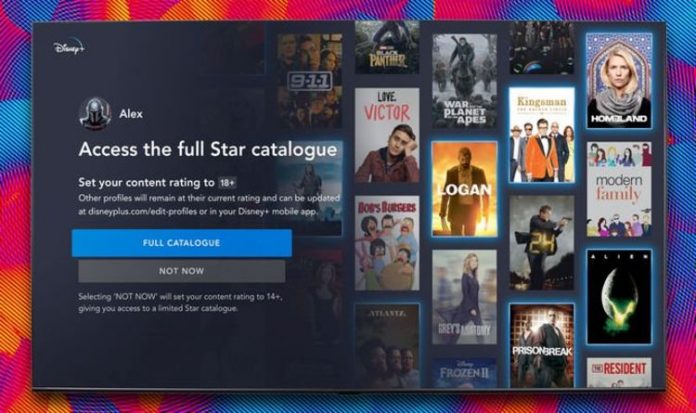 Walt Disney is preparing a dramatic shake-up of its Disney+ streaming service – bringing 75 new series and 270 blockbusters under the new Star banner, which is designed to appeal to more mature audiences. While it’s true that Disney+ isn’t short on content, it has boasted every entry in the Marvel Cinematic Universe, Pixar, Disney Animation and Star Wars films since launch, not to mention original series like The Mandalorian, exclusive film launches like Soul and Mulan and documentary series from National Geographic. That said, Disney+ hasn’t really had an answer to the gritty crime documentaries and mature dramas like Night Stalker, Bridgerton, The Boys, Mindhunter that have made Netflix and Prime Video subscriptions a necessity.

The arrival of Star aims to fix exactly that. Clearly, Disney has to tread carefully – the company is primarily known for its family-friendly entertainment, so introducing Die Hard’s bloodthirsty gunfights into the mix could leave some parents and guardians disgruntled. To avoid any upsets, Disney is making it mandatory for account holders to set a two-step parental control system that sets age rating limits on every profile as well as pin protection.

Account-holders who haven’t yet gone through this process will be limited to 14+ restrictions by default.

Better yet, Disney has confirmed that more mature shows won’t even appear in search or in previews for accounts with these limits in place. So younger viewers won’t know they’re missing out on shows and movies available in other PIN-restricted profiles on the same Disney+ account. Disney+ allows up to seven profiles to be associated with one account. Four devices can stream simultaneously.

When Star lands on Tuesday February 23, 2021, it will single-handedly double the amount of content available on Disney+. As well as the 75 new shows (often with multiple seasons to binge through), more than 270 movies, and four exclusive new shows, Disney has promised to add new titles to the line-up every single month.

Subscribers will be familiar with the current silos within the Netflix rival, including Pixar, Star Wars, Marvel, National Geographic, and Disney. Star will join these as the sixth tile in the main menu of Disney+ and will contain shows for more mature audiences, such as Desperate Housewives, Prison Break, Grey’s Anatomy, 24, Buffy The Vampire Slayer, Family Guy, as well as films like The Favourite, Die Hard 2, Three Billboards Outside Ebbing, Missouri, and Bad Times At The El Royale.

These four shows, which won’t be available anywhere else, join the likes of award-winning movies like The Grand Budapest Hotel, along with classics such as Pretty Woman, Die Hard 2, The Devil Wears Prada, and Moulin Rouge.

Jan Koeppen, President of The Walt Disney Company EMEA, said: “Star will be an integral part of Disney+, making it bigger, bolder and even more exciting. The arrival of hundreds of TV series and movies including our exclusive Star Originals will make Disney+ the premier destination for high-quality entertainment with something for everyone. Needless to say, all this comes with parental controls to give parents that peace of mind.”

Star viewers will also be able to benefit from all of the existing features baked into Disney+, including GroupWatch, which lets you synchronise your episode with friends and react with a number of different emojis – like “funny”, “sad”, “angry”, “scared” and “surprised”. These can be sent on a smartphone, while your Smart TV is synchronised with up to seven other friends.

Disney+ is already available on a dizzying array of platforms, from iPhone to Android, Samsung Smart TVs to games consoles, Fire TV to Roku. Sky Q set-top boxes also have a dedicated app, and customers can pay for a subscription to the video on-demand service on their monthly Sky TV bill.

Walt Disney is likely hoping Star will ensure Disney+ becomes a must-have for families of all ages – not just those with younger viewers. Its first original Star Wars series, The Mandalorian, has enjoyed huge success with audiences of all ages. However, new seasons of this show (and the myriad other original shows based in the Star Wars and Marvel universes in the pipeline) will take time to materialise – in part due to filming delays caused by the pandemic and in part due to the fact that Disney+ hasn’t been up-and-running as long as Prime Video and Netflix.

Despite this, Disney+ managed to draw the largest proportion of new UK streaming subscribers last year with 38 percent of total new customers, while Prime Video took a quarter and Netflix 19 percent.

Unfortunately, with the arrival of these new shows and films, Disney+ will increase its costs. Those who subscribe after February 23 will need to cough-up £7.99 a month – a price rise of £2 compared with the £5.99 a month subscription cost since Disney+ launched in the UK on March 24, 2020.

Thankfully, Disney has confirmed that anyone who already has a subscription to Disney+ will continue to be charged the existing £5.99 a month fee for an extra six months. So while those signing up to Disney+ for the first time on February 23 will be charged £7.99 a month, those who already hold an account won’t have to pay that amount until August 23, 2021.

Teasing its plans for the next year, which already include a packed slate of shows within the Marvel and Star Wars universe, Disney has confirmed that 2021 will see the premiere of new series Dopesick starring Michael Keaton and Rosario Dawson, The Dropout fronted by SNL star Kate Mckinnon, not to mention a slate of FX originals including The Old Man starring Jeff Bridges and new content from the Kardashian-Jenners.