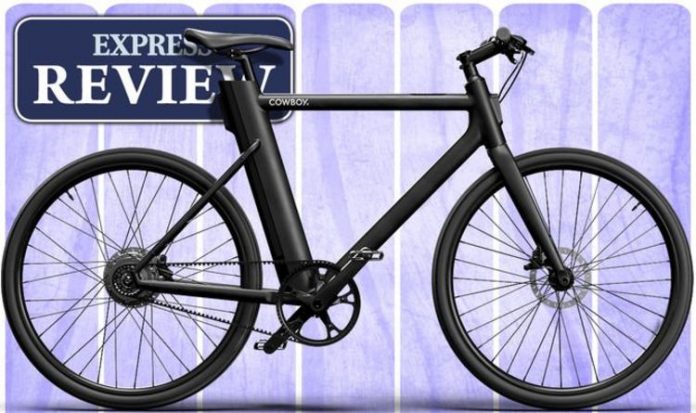 Cowboy 3 is one of the most feature-packed electric bikes we’ve ever tested (Image: COWBOY • GETTY • EXPRESS NEWSPAPERS)

If you’re looking to shake-up your commute this year, you’ll be hard-pushed to find a better option than the Cowboy 3. With its sleek design and slick app experience, this electric bike is a seriously smart piece of kit. Express.co.uk has been charging around (and recharging) the Cowboy 3 for around a month now, here are our in-depth thoughts on this urban e-bike.

At £1,900, there are undoubtedly more affordable electric bikes than the Cowboy 3. But compared to some of the competition, the price tag on the Cowboy 3 is pretty reasonable. Cowboy 3 launched last year and is available to buy right now from a number of dealerships as well as direct from Cowboy.

The Cowboy 3 design is a clever optical illusion. Its sleek exterior doesn’t hint at the sheer amount of technology crammed beneath the saddle. From automatic crash detection to location tracking, there are a lot of smarts included in this electric bike.

Cowboy integrates the lights into the frame design too, so you can never accidentally leave your bike lights at home. This approach also means you’ll never have to worry about charging your lights as both front and rear are powered by the 360Wh battery pack.

That’s useful, but pretty standard for an electric bike in this price range. However, the team at Cowboy has gone a step further and programmed the rear light to flash when it detects that you’re slowing down. This is designed to attract attention and make you more visible as you approach a junction. It’s a really clever idea and works a charm straight out of the box — don’t worry, you won’t have to hunt around in the settings to enable it.

Cowboy 3 keeps things pretty minimal across the board. Unlike some electric bikes, which plaster the handlebars with dials and switches to set your atomic batteries to power and turbines to speed, thankfully, there’s none of that here.

The bike sports a small battery life indicator on the top tube, but leaves the handlebars completely clear. There’s not even a shifter in sight as the Cowboy 3 forgoes gears. That might sound like a bad decision, but honestly, the extra push from the motor means you won’t miss them — even the toughest hill can be conquered without much of a sweat, which is ideal if you’re planning to use the bike for your commute.

Commuters will also be pleased to know that Cowboy is using a carbon-fibre belt instead of an oily chain, which means your work clothes won’t be smeared in grease. Carbon belts are brilliantly hassle-free too, so you won’t need to worry about a chain slipping off at a junction, or re-applying oil after a ride in the rain. Rated at 30,000km (18,600 miles), if you’re buying new, chances are, you’ll never have to worry about replacing the belt either.

Compared to its predecessor, Cowboy 2, the new version packs puncture-resistant tires. We didn’t get a puncture during our time with the bike, but it’s difficult to determine whether that’s a credit to Cowboy’s new tire design… or just dumb luck.

But the highlight of the Cowboy 3 design is the detachable battery, which means you’ll always be able to recharge your bike — even if your garage doesn’t have a mains plug. This is particularly helpful if you live (or are visiting someone) in a block of flats as it means you won’t have to lug the entire bike to their floor to refill the tank.

There’s a subtle battery life indicator on the top tube to show how much charge is left at a glance (Image: COWBOY)

We didn’t get a puncture during our time with the bike, but it’s difficult to determine whether that’s a credit to the new puncture-resistant tires …or just dumb luck

With a mileage of some 43-miles between charges, you should manage to get through most of the week commuting before you need to hunt for a plug. That said, 43-miles is easily achievable for those who take cycling seriously, so Cowboy 3 is probably not the best choice for those who want to head out on the road for hours at the weekend.

Charging is handled with a proprietary plug that ships with the bike. Cowboy says it takes around 3.5-hours to completely refill the battery from flat, something we found to be true during our testing. That’s quick enough that you can easily top-up your battery if you’re spending the afternoon with a friend, before setting off back home.

In terms of ride, the Cowboy 3 feels incredibly natural. Unlike some electric bikes, where the motor kicking in feels like the moment the Nitro button is pressed in The Fast And The Furious, Cowboy gradually increases the amount of assistance based on the strain placed on the pedals. So, if you’re pushing to reach the top of a hill, you’ll hear the purr of the motor pick up. This system lets you always feel in control, something that’s not true of electric bikes with a crude accelerator switch on the handlebars.

Cowboy’s rear light is designed to blink as you approach a junction to make you more visible (Image: COWBOY)

That said, if you push hard from a standing start, you can really tear away from the traffic lights. Given that Cowboy 3 is designed as a city commuter, that makes sense — you want to put some distance between you and the mob of angry motorists as quickly as possible.

In our time with the bike, we only ran into a few quirks with the motor. These tended to occur after we pushed off — only to brake as we suddenly rethought our route. The motor took a few seconds to realise we’d decided not to head off after all and kept the wheels spinning. It didn’t happen often, but it’s not the sort of issue we ever encountered with Ampler’s motor system, although admittedly that isn’t available on bikes in this price range.

More than any other electric bike we’ve tested, the Cowboy 3 feels like a gadget. And why not? Electric car manufacturers shouldn’t have the monopoly on fun new features and software updates for road vehicles!

That said, if you’re a little technophobic, or looking to buy a bike for someone who is, Cowboy 3 might not be the best example. As it stands, you can’t even set off on the bike without taking out a smartphone, loading the Cowboy app, and unlock the bike.

Cowboy has promised to introduce a smartphone-less way to unlock its bikes soon, but it illustrates how tightly integrated the bike and companion app truly are.

This integration isn’t necessarily a bad thing. In fact, it enables some really clever features, including the ability to locate your bike on a map at all time using the built-in GPS.
In future, the Cowboy app will send a notification when it detects movement when you’re not at your bike’s side. Dubbed Theft Alert, this is designed to give you a heads up and lets you track the movements from the app while you work out what has happened.

Crucially, while you can ‘lock’ the bike from the app, this only disables the motor. It doesn’t stop the wheels, so you’ll need to invest in a bike lock to stop thieves.

At 16.9kg, the Cowboy 3 is pretty lightweight for an electric bike (Image: COWBOY )

The Cowboy app also includes built-in turn-by-turn navigation and a live dashboard live that lets you see your current speed, remaining battery charge (in percentage as well as mileage), duration of your ride and total distance. If you don’t already have a handlebar mount for your Android or iOS device, you’ll want to add one to your basket at checkout with the Cowboy 3 to take full advantage of this well-designed app.

Finally, Cowboy 3 has crash detection, which kicks-in when sensors detect that the bike has tipped over while pressure was being applied to the pedals. When that happens, the bike lights will begin to pulse — alerting you that the feature has been triggered. If you don’t respond to a notification from the Cowboy app, it will assume that you’re unable to, and will reach out to your emergency contact with your current GPS location.

Thankfully, we didn’t get the opportunity to test this in the real world, but it’s incredibly reassuring to know the feature is there.

Mudguards can be added at checkout, although they’ll cost you extra (Image: COWBOY)

Even without its motor, Cowboy 3 would pack a punch. It has a stunning design, is surprisingly lightweight at 16.9kg, and ditches the hassle of a greasy chain for a carbon belt. But combined with all of the clever gadgetry — the GPS location tracking, automatic crash detection and ability to reach out to an emergency contact, live statistics for your ride, flashing brake light — and it’s clear Cowboy 3 is much smarter than your average bike. In fact, it’s much smarter than your average electric bike too.

If you’re the sort of person who regularly heads out for a bike ride without your smartphone, you might want to look elsewhere. However, if you like the idea of a bike that improves with software updates and syncs with your smartphone, Cowboy 3 is a great option.

As soon as we all start commuting again, avoiding cramped train carriages in favour of cruising with this pedal-assisted beaut’ will be a phenomenal way to start the year. And for that, we’ve got to tip our (Cowboy) hat to the team who put this together.