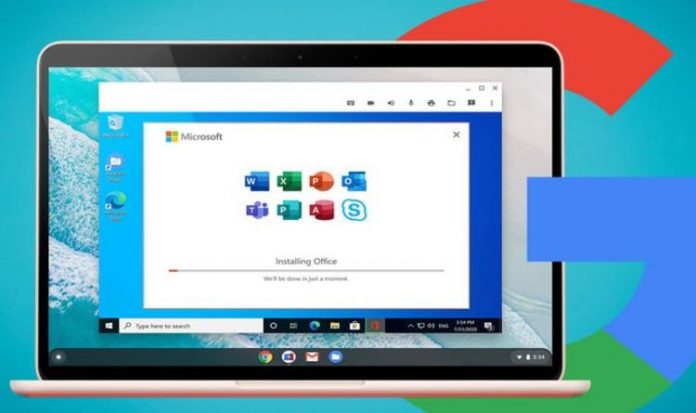 Google announced the arrival of a partnership to bring Windows applications to its hugely-popular Chrome OS – the operating system that powers Chromebooks – back in June. And now, the solution is finally here. Google has teamed-up with Parallels to create a touchscreen-enabled version of Windows 10 that loads-up within Chrome OS. Windows-only applications can be opened within this virtual Windows 10 machine inside your Chromebook.

In future versions of the software, Google and Parallels plan to allow Chromebook owners to load individual apps, rather than having to launch the virtual Windows 10 environment beforehand. However, for the moment, you’ll need to have a small windowed version of Windows 10 to launch the games or productivity apps that you can’t currently find online, or in the Google Play Store for Chrome OS.

Of course, you don’t have to keep Windows 10 running as a small window nestled amongst the other Android apps and Chrome browser windows that you have open. By making the Windows 10 window fullscreen, there’s very little difference between your Chromebook and a Windows 10 PC – except for the fact that Chrome OS has baked-in virus protection, better battery life, and the ability to run Android smartphone and tablet apps. Using the four-finger swipe shortcut on the trackpad, Chromebook owners will be able to move from a Windows 10 PC experience, to Android games and apps, to Chrome OS tabs and apps, and back again.

You’ll be able to copy-paste text and images between all of these too, which should be a huge productivity boost. Not only that, but the Desktop, Documents, Downloads, and other Windows user folders will appear in the Chrome Files app too – so downloading something within the Windows 10 experience, the file will still be accessible to open, edit, or send whenever you switch back to Chrome OS with a four-finger swipe. Some file types, like .docx for Microsoft Word, will launch the Windows 10 version of Word by default, rather than the online or Android version of the app when you’ve installed Parallels’ software solution.

It’s a clever ploy from Google as it removes the barrier to entry for anyone who has avoided Chrome OS devices in the past over the lack of compatibility with one or two Windows 10 applications they need for work, school, or home use.

To begin, it seems Parallels primarily sees this as a way for businesses to adopt Chromebooks over their traditional PC or Mac purchases for employees. Huge numbers of businesses still develop their own custom, proprietary applications that are only available on Microsoft’s platform – still the most common in offices around the globe. There are also a number of applications which, while cross-platform, are more feature-rich on Windows. For example: “chart trendlines in Excel, captions and citations in Word, and custom fonts or headers and footers in PowerPoint” are only available on the desktop Windows 10 version, not those available on Chrome OS.

Camera and USB device support is coming in a future patch, so you won’t be able to use an external microphone or keyboard at the moment. Google and Parallels have confirmed the minimum recommended specifications to use the new software solution. To run Windows 10 apps on your Chromebook you’ll need at least ~