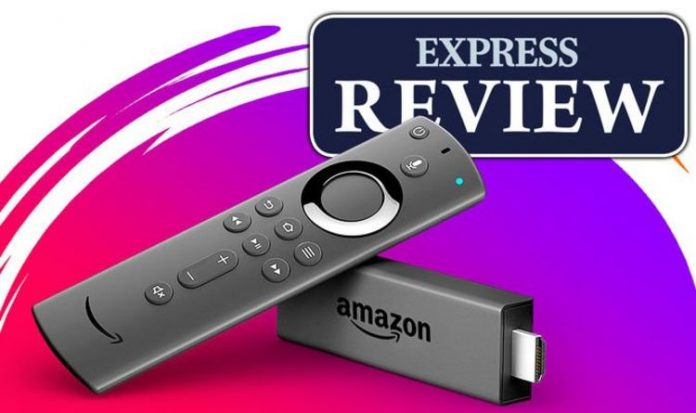 With its latest Fire TV Stick, Amazon hasn’t tried to reinvent the wheel. If you weren’t a fan of previous Fire TV Stick hardware, there isn’t much here to change your mind. But if you’ve been using a Fire TV Stick for a few years now, there are some great improvements under the bonnet that could make it a worthwhile upgrade.

Express.co.uk has been busy bingeing boxsets, streaming movies, and asking Alexa to organise our calendar from the comfort of our sofa. Here’s our in-depth review of Amazon’s all-new Fire TV Stick.

Amazon unveiled its latest Fire TV during its annual September hardware showcase, with the upgraded HDMI dongle landing on shelves in the weeks that followed. Fire TV Stick costs £39.99 and is available from Amazon as well as a number of high street stores.

Fire TV Stick is still, well, a stick. Amazon has managed to squeeze everything into a small dongle with a HDMI connector at the end to plug directly into your telly. There’s also a bundled charging cable, which you can connect to any spare USB ports on your TV or, failing that, Amazon includes a charging plug to connect to the mains.

It always was an elegantly simple design and it still is. Once everything is plugged in, it’s neatly concealed and out of sight. Provided that you have a spare USB port, there won’t even be any trailing cables dangling from your TV — that’s particularly useful if you’ve got a wall-mounted set-up at home.

Of course, most of Amazon’s competitors now offer very similar streaming options. Google, Roku and others all offer sleek HDMI dongles. So, really, the main differentiating bit of hardware for all these gadgets is the remote.

And Amazon’s new Fire TV Stick ships with a new and improved remote control. Or rather, it ships with a remote that was previously only available on pricier models, including the £109 Fire TV Cube which doubles as both a Fire TV Stick and an Amazon Echo Dot.

Unlike older models, the new Alexa Voice Remote that ships with the Fire TV Stick has dedicated Power, Volume and Mute buttons for your telly. Once everything is all setup, that means you’ll only have to reach for a single remote to switch on your TV, choose a movie, and adjust the volume as needed. It’s a small tweak, but one that you’ll be grateful to have every time you start a new boxset.

As the name suggests, Alexa takes centre-stage on the Fire TV remote. That’s a very good thing. Typing out movie titles, names of directors, or apps in the search bar using the directional pad on any remote is pretty arduous, so the ability to just ask Alexa is brilliant.

If you already have a home filled with Amazon Echo speakers and other smart home kit, you’ll be able to use the Alexa Voice Remote to control your lights, set your central heating, and more — all without moving an inch for your place on the sofa. Bliss.

Amazon’s Fire TV is second only to Roku when it comes to its support from streaming services, including NOW TV, Apple, and Google (Image: AMAZON)

Unless you’re already deeply invested in Alexa-enabled gadgets, one of the best reasons to pick up the Fire TV Stick over similarly-priced rivals from Roku and Google, is the software.

Fire TV recently enjoyed a pretty comprehensive overhaul at the end of last year, and the results are great. For our money, Fire TV has always boasted one of the most visually striking software. While Roku has the most comprehensive library of apps, it has a pretty functional (but dull) interface. Chromecast with Google TV looks great, but lacks some of the apps. Fire TV hits a great sweet-spot between these two.

It has expansive, high-resolution artwork from films and shows throughout the operating system, as well as handy shortcuts into your favourite streaming services and apps.

The latest update brought the ability to add up to six individual profiles for the Fire TV Stick. That means each individual family member or flatmate can have their own personalised suggestions based on the latest viewing history, their own library of games and apps.

While Amazon’s Prime Video streaming service has had user profiles for a while now, the feature did not extend to the Fire TV hardware itself. As such, shows and movies would be suggested based everything watched on the telly. So, Fire TV would suggest new films based on those watched by parents in the evening as well as children in the morning.

Following a software update at the end of 2020, Amazon has added profiles to the device, as well as a Live tab for sport fixtures and other events (Image: AMAZON)

Needless to say, that could lead to some pretty confusing suggestions or could lead younger viewers to stumble across a post-watershed show showcased front-and-centre on the Fire TV homepage.

Likewise, shortcuts to resume boxsets would appear side-by-side with no differentiation based on who was watching the show.

Not only that, but each user profile will have its own Watch List, so you’ll be able to queue up a list of films and shows that you’re keen to watch – and it won’t impact anyone else who watches the same telly as they’ll be able to create their own lists. Profiles should ensure that everyone gets a highly personalised experience when using a Fire TV. Until now, that’s only really been true for those who live alone… or have a different Fire TV Stick in every room in the house.

As well as profiles, Amazon tweaked how it makes recommendations. The update adds a new Find tab at the top of the user interface, which is designed to bring together all of the boxsets and movies that Amazon thinks you’ll enjoy based on your previous viewing.

As before, these will include recommendations from a variety of streaming services – not just Prime Video – so expect to see new boxsets from Disney+, Shudder, and Netflix in the mix too. In our time with the Fire TV Stick, this performed admirably and made some pretty great suggestions in line with our tastes.

Our only minor quibble is that Amazon still uses IMDB scores across the Fire TV Stick, unlike the Rotten Tomatoes scores found on Chromecast with Google TV, which for our money, are a better reflection of the quality of a film or series you’re unfamiliar with.

With the addition of NOW TV, Disney+, YouTube, BT Sport, BritBox, and Apple TV+, there’s not a lot missing from the Fire TV Stick’s library of apps these days. In fact, the only thing you might miss when compared to its competitors is the amazing Cast feature on Chromecast, which lets friends and family throw their photos, playlist requests or Chrome web browser tabs onto the big screen with a click.

When plugged into the HDMI port at the back of your telly, you won’t even notice the Fire TV Stick (Image: AMAZON)

If you’re still streaming with one of the original Fire TV Sticks, a remote-less Chromecast, or an ageing Smart TV, the latest Fire TV Stick is a solid investment.

Navigating around the menu is incredibly smooth, Alexa is a convenient way to search for movies and actors without the nightmare of typing with an on-screen keyboard, and the new profiles feature means you’ll be able to keep Amazon’s clever AI suggestions based solely on your viewing history.

And the improved Alexa Voice Remote means you won’t have to juggle three different remotes to control the volume of the sound system, turn on the TV, and select the episode you want to watch (although the Chromecast with Google TV does improve on this slightly by adding an Input button on its universal remote, so you can jump between HDMI connections to find the streaming dongle without picking up another remote!)

For £39.99, the Fire TV Stick is aggressively priced. If you can wait until Prime Day, Black Friday, or any number of other sales events, you’ll probably be able to pick it up even cheaper from Amazon. It’s worth noting that for an extra tenner, Amazon offers a Fire TV Stick that’s compatible with 4K Ultra HD streaming. Of course, you’ll need a fibre broadband connection (and a Smart TV) that’s up to the task to watch in that pixel-packed quality, but if you have both, that might be a better option.