It turns out there are a lot of special places in Hull, and all you have to do to find them is follow the red line.

Visitors from across the Ottawa River can now take a walking tour through Gatineau’s central district, marked by a red line painted along the sidewalk and inspired by the Freedom Trail in Boston, Mass.

The three-kilometre trail, now in its second year, begins at Jacques-Cartier Park and features cultural attractions and public art along the way.

Stefan Psenak, head of Vision centre-ville, the group behind the red line, told CBC Radio’s Ottawa Morning the tour aims to expose visitors to more than just the tourist destinations like the Canadian Museum of History.

“How do we get those people to not cross back to Ottawa right away after their visit? To look at what’s happening here. There’s a lot happening here, there’s cool places. Restaurants and shops,” he said. 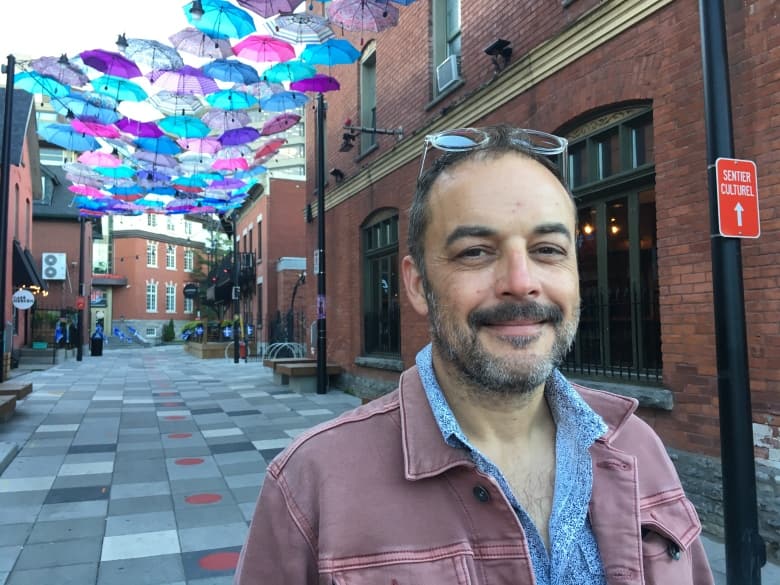 “We had quite a team last year. We had a committee for Canada’s 150th birthday,” he said. “It was quite something to measure, but we’re happy we got those figures.”

The group was able to focus on Mosaïculture in Jacques-Cartier Park to draw tourists in 2017. This year they’re working with partners along the line, including the Canadian Museum of History, to direct visitors to the trail, Psenak said. The group behind the three-kilometre red line hopes it will coax tourists past Jacques-Cartier Park and the Canadian Museum of History, and into the heart of Hull. (Hallie Cotnam/CBC News )

He added that the group is open-minded about adding more English signage — a touchy subject in Quebec, with its French sign laws.

There are 24 signs along the red line with fun facts and history in both English and French. They’ve also launched a bilingual app, Psenak added.

“So yes, we are improving that part. A lot of our visitors, they come from Ottawa or other parts of Canada.”