Scientists in Lethbridge, Alta., are digging into the mystery of why a diet of seaweed helps cows be less gassy.

Gassy cows are bad for the environment, so the natural gas-reliever has caught the attention of the Canadian government.

Cow burps and, to a lesser extent, cow farts exude methane, a gas that damages the atmosphere and contributes to global warming.

At a time when methane gas production is surging, it doesn’t help that in Canada, 88 per cent of agricultural methane emissions come from cattle, the federal government has found.

Some cattle farmers who live near oceans, such as those in the Maritimes and Australia, already feed seaweed to their livestock. 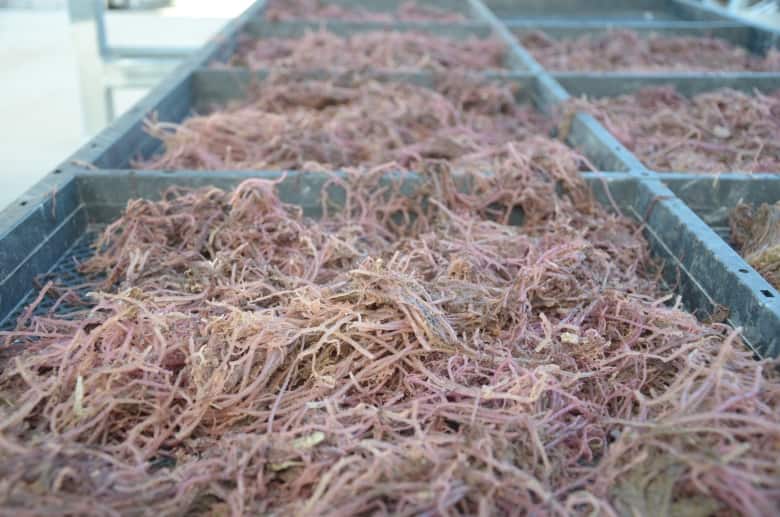 Red seaweed has been used to feed cattle. (Ocean Harvest)

Agriculture Canada scientists based in Lethbridge are approaching the diet from the other direction. Cows eating seaweed produce dramatically less gas but these scientists want to know why and how.

This spring, the team published an article in the journal Nature Communications, where they detail how an enzyme in the human stomach digests carbohydrates in seaweed.

The next step would be to isolate that same reaction in a cow’s stomach, Agriculture Canada scientist Wade Abbott says, and eventually use that data to determine how seaweed can be used as feed — and potentially biofuel.

Seaweed is hard to harvest, so a wide commercial market for livestock feed is still far off, but this sign is promising, he says.

Q: Tell me what you’re hoping to establish in the short term.

So the way we go about this is, we look for new or rare bacteria that are colonizing our guts that can metabolize these alternative feeds.

The success story that has been getting a little bit of attention lately is that we’ve found a pathway in a bacteria that is dedicated to the use of a very common carbohydrate found in a cell wall of a red algae.

Q: Why is this uncharted territory? I only ask because humans have been raising cattle for an extraordinarily long time on many island nations. We certainly have coasts of our own. Why is this something new?

A: It’s not new if we look beyond our borders. People have been eating seaweed since antiquity.

It’s actually a very large industry in Asia, very lucrative industry, not just for feeds but for other products, as well, cosmetics and thickeners, et cetera.

Up until now, we’ve been looking for ways to use land-based grains and forage crops for raising cattle. This is becoming, I guess, environmentally more restrictive. Some of the other issues surrounding livestock production, as well, are suggesting we need alternative feed stocks. Can we use residues from agriculture or even look to other sources, such as the ocean?

So that’s kind of how we’re thinking about this. We’re trying to find alternative feedstocks that could be used to supplement more contemporary diets.

Q: If you find out that seaweed is a good thing to add to the diets of livestock, and I understand there’s already some research that proves that, could people farm it in Canada? Do you see this as a future industry?

It grows rapidly. There’s some species of seaweed that can grow one metre per day.

It introduces biodiversity into the oceans, as well. It creates habitat for fish stock and it could be potentially, if there’s demand, it could be a potential cash-crop as well.

So the technology is out there. It’s just not adapted to Canada and there’s not a lot of awareness.

But until that demand is there, I don’t really see a lot of fishermen dropping their fishnets and starting to culture seaweed.