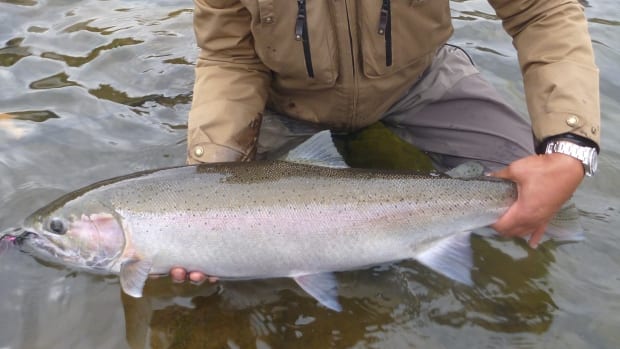 The Tsilhqot’in National Government has closed its steelhead fishery and relinquished its Aboriginal right to fish local steelhead due to a low return in the Chilcotin River last fall.

The Chilcotin River steelhead population has declined by 80 per cent over the past three generations — only 58 steelhead returned to the river last year.

The Committee on the Status of Endangered Wildlife in Canada, B.C’s fish and game branch, the Kamloops Fly Fishing Association and even actor and fishing enthusiast William Shatner have all spoken out about the dire situation for steelhead in the Thompson and Chilcotin rivers.

Alphonse said the decision to close fisheries and ask members not to fish steelhead this year has been difficult, but necessary in order to preserve the steelhead population for future generations.

“It’s a big issue for us to forgo our Aboriginal right to fish but you have to be thoughtful of future generations, make sure you’re managing wild fish stocks to the best of your availability,” he said.

Meanwhile, the chief said the Tsilhqot’in National Government is pressuring the B.C. government and the federal department of fisheries to take action on the steelhead decline in B.C.’s Interior.

“Every sector of the fishing industry has to do the same as far as we’re concerned,” Alphonse said.

One thing he said the government can do is address bycatch of steelhead by commercial fisheries.

“Bycatch should be eliminated. We can’t afford to lose one steelhead at this point in time.”

CBC News requested comment from the Department of Fisheries and Oceans on Tuesday, March 20, and has not heard back.

Alphonse said the number of steelhead fluctuates from year to year, which is why the Tsilhqot’in haven’t made the closure in the past.

“There are other things that we can be doing to strengthen the fish stocks,” he said.

“We have the hatchery that was produced strictly for steelhead that hasn’t been active for quite some time. I’m not the biggest fan of hatchery produced fish, but you know when you’re in these circumstances, every little bit helps.”

“We will be looking at every avenue to increase these numbers.”

With files from Daybreak Kamloops and Samantha Garvey