Afifa Maaninou would like to compost her organic waste, but she can’t, because there are 14 units in her apartment building in Montreal’s Côte-des-Neiges neighbourhood, and the city only provides compost bins to residential buildings with fewer than nine units.

When she called her borough office and asked what she could do, she was redirected to a city bureaucrat, who told her to try putting it out on the street anyway.

Nobody picked it up.

“If you’re not on their list, they won’t take it,” Maaninou says.

It’s problems like these that contribute to Montreal’s dismal rate of diverting organic waste from its landfill — just 20 per cent in 2016, according to the city’s auditor general’s report —  far from the lofty goal of 60 per cent the province set in 2011.

Quebec has since postponed that target date to 2025, expanding the scope of its plan to divert organic waste to include factories, businesses and institutions.

“The diversion of organic waste from landfill sites is a tremendous challenge for municipalities,” said Auditor General Michèle Galipeau in her report, released this week. 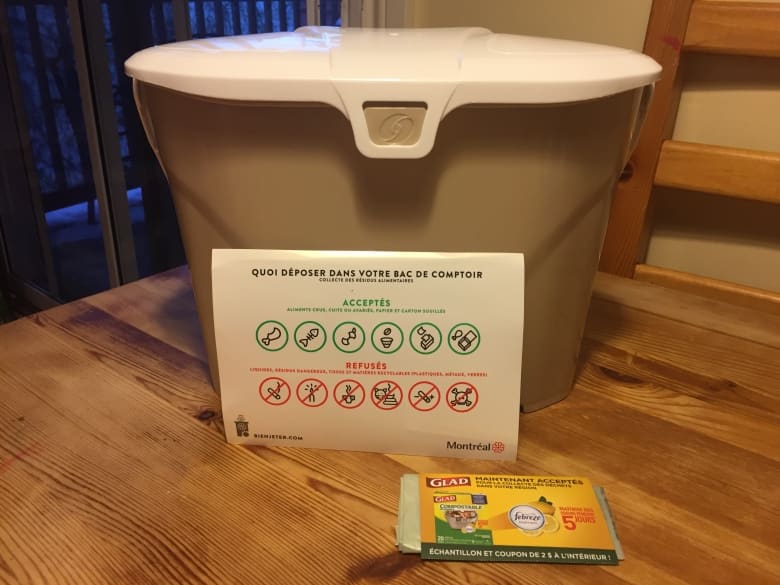 The report says households find composting challenging to adopt because it can invite maggots, insects and odours into the home. (Emmanuel Marchand/Radio-Canada)

Nearly 47 per cent of Quebec household waste is organic and thus compostable, according to Galipeau’s report.

While she said recycling has been widely adopted by Montrealers, far fewer are composting food and other organic waste.

In part, that’s because of the city’s focus on providing composting to single-family homes and buildings with eight units or less, although the city says that covers 87 per cent of residential buildings.

The report says it’s also a challenge because many people are apprehensive about odours and attracting insects.

Concordia now has 65 bins throughout the campus, but Shennib said when the university started its recycling program in 2008, you might have found “a box of worms” in somebody’s office.

This school year, it collected 1,606 bins of compost — 684 more bins than the previous year. 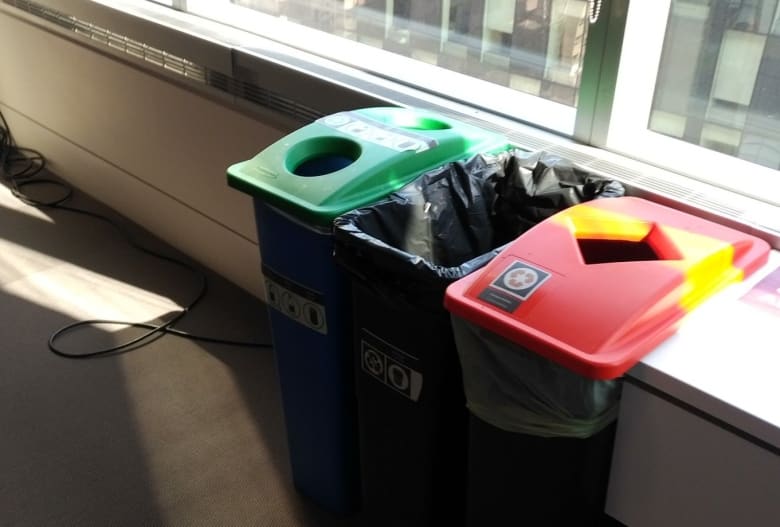 Compost bins, along with recycling bins, are now a common site at Concordia University. (Waste not, Want Not Concordia)

Shennib said there was a “huge educational component” behind getting people on campus to compost. He and his went to faculty meetings and met with students to talk up the benefits of composting.

The auditor general cites two major municipal initiatives which may result in increasing the amount of organic waste that’s composted.

The first is the construction of five organic waste treatment plants across Montreal, three of which are expected to be operational by 2020.

The other is the expansion of composting to all residential buildings with eight units or less.

There is no immediate plan to expand the program to larger apartment buildings, which the auditor general said is  “imperative” if the city wants to boost its composting rate.

The city says it’s at the information-gathering stage, with the intention “to move forward quickly.”

Opposition councillor and Saint-Laurent borough mayor Alan DeSousa says the city should be moving more quickly to roll out its brown compost bins to all residences, piloting organic waste pick-up in bigger apartment buildings at the same time.

“You have to be able to play on two pianos at the same time,”  DeSousa said.