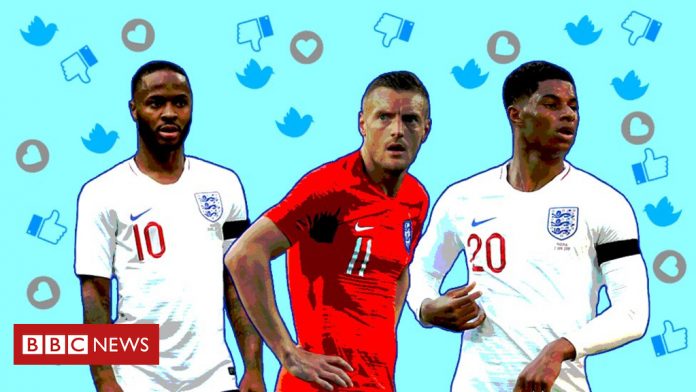 “You’re detached from the outside world. You’re out of your comfort zone. You’ve got to occupy yourself.”

That’s how Rio Ferdinand describes the England camp at a World Cup.

It presents a challenge to the squad – how do they stay focused and motivated for a month without any home comforts or familiarity?

Some England players have already hinted what they’ll do – and it mostly revolves around playing Fortnite and watching Love Island.

But their use of social media is more controversial.

‘A killer for a tournament’

While social media is a good way for the players to stay in touch and pass the time between training sessions, it also opens them up to potential criticism and trolling – which could impact on their performance on the pitch.

That’s why Rio Ferdinand says it’s a “killer for a tournament”.

But how can you ask a bunch of guys in their 20s to stay off Instagram for a month?

And Alex Scott says using social media – in the right way – can even be a positive thing.

‘If you haven’t got thick skin, God help you’

Ferdinand’s argument is that as a player, you’re going to have to see some negative comments about yourself.

Those negative comments could start spiralling around your head during downtime.

“You have so much time to think about it. And that can have an effect on your performance during training and matches as a player.

“If you haven’t got thick skin, God help you.”

‘Take things with a pinch of salt’

Frank Lampard accepts that “you can get criticism online very easily” as an England player.

“But you can’t ask a 21-year-old lad at the World Cup to not check his feeds – I think that would be pretty much impossible,” he adds.

He says “thankfully” he only had to deal with social media towards the end of his playing career.

His advice would be to remember that “a lot of talk will have no relation to how to personally prepare for games and perform – so take things with a pinch of salt if need be”.

‘Use negative comments as fuel’

England Women’s most-capped player Alex Scott says she was able to use negative comments to her advantage.

She “used it as fuel” for the next game.

Social media was such a big issue for the Lionesses that they voted on whether or not to stay off it during the 2015 World Cup.

They eventually opted not to ban it for the tournament, but Alex says there were only one or two votes in it.

“Some players find it hard and need to switch it off and get away from it. But each to their own.”

The differing opinions in the England Women’s World Cup camp – and among the BBC pundits – suggests there isn’t one hard and fast way that players should approach social media at a tournament.

It’s a question more and more sports psychologists are asking: does using social media help or hinder performance on the pitch?

Tim Pitt, a sports psychologist at the English Institute of Sport, says it’s an important question for sportspeople to think about before a major competition.

“Having a routine around tournaments is what athletes use to create familiarity when they go away,” adds Tim.

But, like all sports psychology, there’s no blanket rule on what works and what doesn’t.

In the end, it comes down to the individual player.

“However you manage it, it’s about proactively knowing how to use it so it’s useful for you.

“Useful could mean coming off it completely.

“Useful could also be knowing how to engage with it, how to connect with fans and how to use it to keep you busy during downtime.”

Newsbeat’s at the World Cup in Russia this summer.