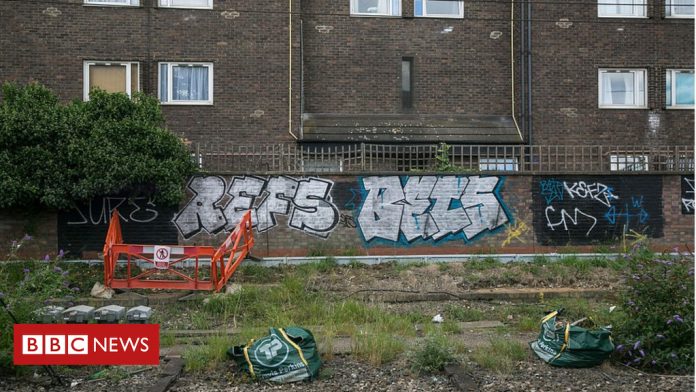 Three graffiti artists were killed by a train in south London in the early hours of Monday. They had nowhere to run when a passenger train thundered through the darkness near Loughborough Junction.

Mr Carrasco had contacted his parents Isabel and Carlos at 22:00 BST on Sunday to say he would be back in time for dinner.

At 07:34 the following morning, three bodies were spotted on the tracks and police had to tell three families their boys would never come home again.

Because as Supt Matt Allingham from British Transport Police said, “There isn’t a safe refuge up there. If they’ve been caught in that section of track when a train came through then they really wouldn’t have had much option.”

Despite the obvious and inherent dangers, tagging on the railways has hit an eight-year high in Great Britain.

In the first three months of 2018 there were 982 graffiti attacks on trains, stations, lines, depots or footbridges – the highest quarterly figure since 2013.

The peril is seemingly part of the appeal.

The website for Frontline London, a graffiti magazine, says it “is here to take you back to the roots of painting. To where it belongs, to where risk, location, timing, style make a writer as good as their work.”

But although there is a recent surge in reports, the train-art movement goes back decades, to 1970s New York City.

“For graffiti crews in the ’70s it was all about being seen,” says Richard Clay, professor of digital humanities at Newcastle University.

“Those growing up in the Bronx could achieve fame through spraying their tags, and if the tags were on the outside of trains going on multiple routes, they could become ‘all-city’ famous.”

It arguably began with an artist called TAKI 183 – Taki being a diminutive of a number of Greek names – who began spraying his name and street number onto ice cream trucks in his neighbourhood in Washington Heights, northern Manhattan, in 1969.

The following autumn, he went to high school in Midtown Manhattan, taking the 1 train down and back. Along the way, he wrote TAKI 183 on the subway stations and anywhere else he thought was a good spot, emulating the election posters and stickers plastered around the city for the elections in 1968 and 1970.

A journalist from the New York Times tracked TAKI 183 down. After the publication of an interview in 1971, tagging on the railways soared.

But, as Prof Clay who has made a BBC documentary about graffiti points out, putting your tag on a rail-side wall means passengers see it for just a split second.

The design, therefore, has to be striking and memorable. Locations on busy sites, such as routes into central London, are highly sought-after because more people see the piece.

Far more impressive within the scene is managing to paint on the outside of a carriage.

“It’s the ‘uppest’ to have your tag on the outside of a train car that will run around the city. A whole car is hard – it’s tall and you’d need a ladder, so it’s much more common to see a half car or just a piece of a car done,” Prof Clay says.

“Painting high up is… a signifier the artist has nerve; it’s more visible than a ground-level piece, and it’s difficult to clean.”

And artists would have to be quick – about 15 minutes for a piece in the dark – so they were very well prepared, planning the design in a sketchpad beforehand and practising in timed conditions.

“Back in the days before CCTV, it was very much a cat-and-mouse game. Crews would have to paint in the train yard in the dark. One guy, his name was Morn, named himself after the only time he could see his work before it was scrubbed away or painted over – the early morning,” says Prof Clay.

“Train painters were the top of the tree, they thought of wall painters as lightweight kids. The train painters would rehearse their designs on walls near train lines first, and when they were ready would do a lightning strike.”

He explains artists don’t tend to bother with underground trains as they get scrubbed clean almost straight away. Indeed, Network Rail’s policy is “to remove all graffiti as soon as safely possible… We aim to remove offensive graffiti within 24 hours”.

Freight trains, however, don’t get cleaned, so they are a better target for graffiti artists.

“But it’s really risky,” says Prof Clay. “There’s the transport police, CCTV, the danger of the third rail. It is very dangerous, and it’s the danger that earns props and respect.”

Another significant factor is the rise of social media.

Where once an artist would have to take a photograph of his or her work and have it developed, the only way to share images would be by showing people directly or sending it to a graffiti magazine.

Now, within seconds of work being finished, it can be uploaded and shared around the world to vast numbers. UK Frontline’s Instagram account, for example, has nearly 18,000 followers.

Thanks to such sites, “an artist in Brixton knows what the scene is like in New York, Bulgaria, France, Germany”, says Prof Clay – very different to the 1990s, when artists did not really know each other’s work.

“It’s a global audience and artists are global practitioners.”

But those who trespass on the tracks for the sake of a tag are taking a very real risk.

“If that is what they were doing, the three men who sadly died in London aren’t the first to die rail graffiti painting, either on the track-side wall or the train itself,” he says.

It seems unlikely they will be the last.