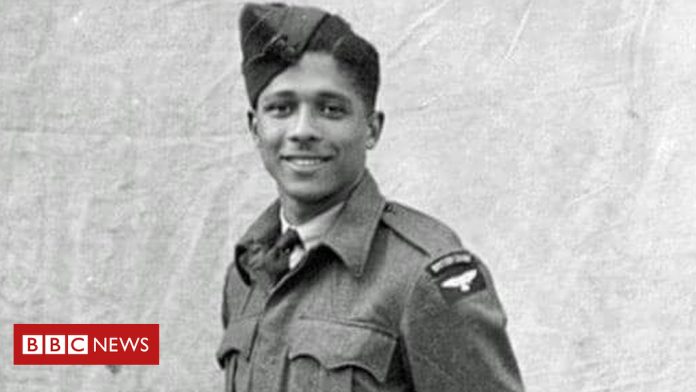 In 1944, before the Empire Windrush arrived in the UK, Harold Sinson was about to meet the love of his life in a family home in Yorkshire.

Harold came to the UK from Guyana – then British Guiana – and served in the Royal Air Force during the war.

He responded to the call from Britain that looked to its Empire for volunteers to join in the war effort. He wanted to, “help the mother country in her hour of need”.

He was stationed at a Butlin’s holiday camp in Filey, North Yorkshire which was used to accommodate military personnel.

Nearby was a branch of The Salvation Army which some of the RAF men would visit. It was a regular practice for Salvation Army families to invite servicemen to their homes for lunch despite the wartime shortages.

On a Sunday in June, one such meeting formed a lasting impression on 15-year-old Pauline Woolston.

“My sister urged our mother to take one [serviceman] home for lunch. This was the usual procedure, but that day was different – there were so many and some were black, quite an experience for us youngsters,” wrote Pauline, in an account she jotted down some years later.

She adds: “A friendship began between Harold and myself which blossomed as the time passed by.”

On their days off, Harold and one of his friends would visit Pauline and her family.

But Pauline was worried that prejudice would cause problems in their budding relationship as she wrote: “All I kept asking God was ‘Why is he black?’.” Although Pauline had taken “quite a shine” to Harold she didn’t think they had a future together.

For the rest of the war, Harold was also stationed in Wales and Scotland and he would see less of Pauline. By 1946 he was demobbed and returned to Guyana.

By 1948 – the year the Empire Windrush left the shores of the Caribbean for the UK – Harold had the opportunity to get on board.

“Granddad often spoke about how he was mostly treated kindly and with respect when he arrived in the UK,” says granddaughter Jo Fairwood.

“He had a few local jobs in Brixton, south London before rejoining the RAF. Granddad was posted to many different locations around the world.

“He rose through the ranks to Warrant Officer and those that he was in charge of, said he was a ‘true gentleman’.”

But Harold never forgot one special young lady who he met in Yorkshire during the war.

“In the early 1950s, my grandfather was in Singapore in the Marine Craft Unit – part of the RAF air and sea rescue. One of the lads he was with, who came from Newcastle, was going home on leave and he kindly invited my grandfather to go back with him,” says Jo.

In 1950, Pauline went down to London to the Salvation Army Training College where she later became an officer. She was later posted to Northumberland to work. Every week she had to go to a Holiness meeting in Newcastle.

In her own account, Pauline wrote: “One night… a lady I didn’t know came to me and showed me a photograph of Harold and asked me if I knew him – of course I did.

“She told me her son Jim was his friend and they were coming to stay with her on leave and would I like to go and meet them?”

Pauline went on to describe the first time she and Harold met each other again: “Wow! It was almost formal and yet something ‘sparked’ between us.”

Now that they were reunited, Harold would often propose to Pauline but there were still obstacles in their path.

Harold’s postings abroad kept him separated from Pauline, but she realised how much she loved him and so, on his return from his duties, she accepted his proposal of marriage.

But there was a small matter of how her family would take the news of their impending union.

“Harold was a Christian, but some people, including my father, were not at all happy about this arrangement,” wrote Pauline.

She described her father’s reaction: “Harold tried his best to meet up with my dad, but as Harold came in the front door my father went out the back. [But] at last they did meet and Harold told him if he didn’t ‘give me away’ [then] that was it.”

Then Pauline’s father surprised them both: “One day my dad came home with a canteen of cutlery for us… he had changed his mind.”

Nine years after their initial meeting during the war, Harold and Pauline were married in 1953, and her father gave her away at the wedding.

They had three daughters, Christine, Carla and the youngest Dorothy.

At the time, racially-mixed couples were rare and, as Dorothy explains, the ethnicity of the groom was a surprise to some family members.

“Many years after she had been married, one of my mum’s older relatives said to her that when she got the invitation to the wedding, she went without knowing that she was marrying a black man.

“She went on to say that had she known that she wouldn’t have attended the wedding.

“But she told mum that her views had changed and that she had realised the error of her ways – it wasn’t a problem for her any more. So my dad was generally accepted by the family.”

“Harold served in the RAF until he was 55,” says Dorothy.

“For the next 10 years, he worked as a housing officer for the Army.

“Upon his retirement when he was 65, he worked as a volunteer for the Citizens Advice Bureau and he also served as an elder in his church.”

“He influenced his family in many ways,” says Dorothy. “My sisters and I are strong Christians and have served in the church in a voluntary basis. We have also volunteered in our communities.”

Like her father before her, Dorothy joined the armed forces.

“My dad tried to teach me drills and was very proud when I passed out of Sandhurst officer training college.”

In later years Harold and Pauline lived in Hertfordshire but when Pauline became ill in 2007, they moved to Scotland where their middle daughter Carla helped to look after her mum.

They settled in Alness, around 20 miles away from Inverness. “They lived on the same plot of land where dad was based in the RAF. It was a seaplane base where he helped to launch high-speed boats. There’s a memorial of the base on the site,” says Dorothy.

In 2010, Harold died of cancer. Pauline had developed dementia and died the following year.

Jo says of Harold: “He came here to serve this country and he never complained. He was kind to everyone he met and treated everyone with the greatest respect. He was a friend as well as a father and grandfather and he never let me forget that he was always there for me.

“We are very proud of him.”

With special thanks to the Sinson and Fairwood families.

The British Library in London is featuring Windrush: Songs in a Strange Land exhibition that runs until 21 October.