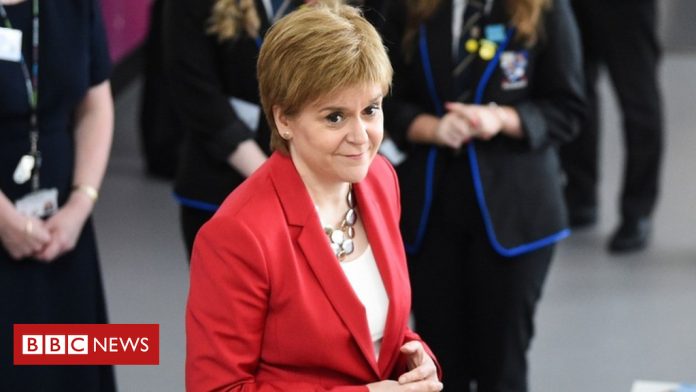 Nicola Sturgeon is to meet senior UK government politicians for the first time since accusing them of “ripping up” the devolution settlement.

The UK government last week pushed through its Brexit bill without the consent of the Scottish Parliament.

The move brought a furious response from Ms Sturgeon, with SNP MPs walking out of Prime Minister’s Questions.

Ms Sturgeon and Mr Lidington are both attending a meeting of the British-Irish Council, which brings together representatives of governments from across the British Isles.

They will be joined by figures including Irish Taoiseach Leo Varadkar, Welsh First Minister Carwyn Jones and representatives from Guernsey, Jersey and the Isle of Man.

It comes as relations between the UK and Scottish governments are said to have hit their lowest point since the advent of devolution.

Ahead of the meeting, Ms Sturgeon and Mr Jones issued a joint statement in which they repeated their call for the UK to remain in the single market and customs union after Brexit – which has already been ruled out by Prime Minister Theresa May.

They said: “The aim should be a ‘Norway Plus’ model on the basis that the red lines set out by the prime minister in her Lancaster House speech in January 2017 are not consistent with the national interest.”

Mr Lidington said people wanted to see the various governments work together to improve their lives, and said the UK government was “committed to keeping up the pace, and improving the depth, of our co-operation”.

He added: “I hope that the Scottish government will maintain their own side of that relationship.”

The House of Commons last week spent less than 20 minutes debating the EU Withdrawal Bill’s impact on devolution, with Mr Lidington the only MP who was able to make a speech.

The bill has been at the centre of a long-running row between Edinburgh and London, and has been pushed through by the UK government despite MSPs at Holyrood refusing to grant consent.

It is the first time this has happened since the Scottish Parliament was created in 1999.

Ms Sturgeon tweeted that the move meant the devolution settlement had been ripped up, while her Brexit secretary, Michael Russell, claimed it showed devolution was “being treated with contempt by the UK government”.

The SNP’s leader at Westminster, Ian Blackford, subsequently led a walk-out of his MPs during PMQs – with Ms Sturgeon saying she was proud of the protest, but opponents deriding it as a pre-arranged publicity stunt.

What is the row all about?

The UK government is committed to “not normally” passing laws that impact on devolved powers under something known as the Sewel Convention.

But it argues that Brexit means these are not “normal” times, and that it needed to act despite not having Holyrood consent in order to allow a smooth transition after the UK leaves the EU.

The row over the Brexit bill centres on 153 powers in what are now devolved areas, but which were sent to Brussels when the UK joined the EU in 1973.

Westminster effectively wants to keep “temporary” control of 24 of these powers when they return to the UK after Brexit, with the remainder of the 153 going directly to the Scottish Parliament.

It says having control in key areas such as farming and food labelling for the first few years after Brexit will ensure the same rules continue to be followed across the UK.

The Scottish government wants all of the powers straight away – although it agrees that UK-wide rules and regulations are needed – and has repeatedly accused the UK government of a “power grab”.