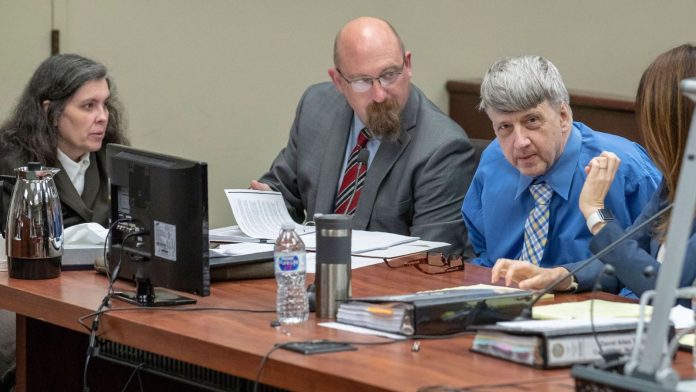 A court in California has heard the 911 call made by a 17-year-old to tell police about the years of abuse she and her 12 siblings allegedly suffered at the hands of their parents.

In the call the girl tells the dispatcher to “help my sisters” as she gives details of their squalid house with a suffocating stench, where they were shackled to beds and choked by their parents.

The children’s parents David and Louise Turpin have pleaded not guilty to torture, child abuse and other charges.

Louise Turpin dabbed her eyes with a tissue as the recording was played during a preliminary hearing to decide if the couple should face trial.

The girl is heard saying two younger sisters and a brother were chained to their beds and that she could not take it any longer.

“They will wake up at night and they will start crying and they wanted me to call somebody,” she said in a high-pitched voice. “I wanted to call y’all so y’all can help my sisters.”

The 911 call in January marked a new start for the 13 Turpin offspring – aged two to 29 – who lived in such isolation that some did not even understand the role of the police when officers arrived at the house in Perris, 70 miles (113km) southeast of Los Angeles.

Two girls, 11 and 14, had been hastily released from their chains when police showed up, the court heard, but a 22-year-old son remained shackled.

The man said he had been tied up with ropes at first and then, after learning to wriggle free, restrained with increasingly larger chains on and off over six years.

Children were deprived food and had no toys or games but were allowed to express themselves in journals which were seized by investigators.

An 11-year-old girl who was shackled to a bed had arms the size of an infant and a 12-year-old girl could not recite the alphabet, the court heard.

The oldest of the siblings weighed just 5st 8lb (37kg).

Most of the Turpin children were home schooled, but one of the older boys was allowed to attend classes at a local college.

His mother would drive him there, stay outside in the hallway during the class and then take him back home as soon as the class ended, prosecutors said.

The girl planned her escape for two years and was terrified as she climbed out a window to freedom, Riverside County Sheriff’s Deputy Manuel Campos testified.

“She couldn’t even dial 911 because she was so scared that she was shaking,” he said.

The teenager did not know the neighbourhood and had to read her address to the dispatcher off a piece of paper. The children were rarely allowed outside, though they went out on Halloween and travelled as a family to Disneyland and Las Vegas, they said.

“Sometimes I wake up and I can’t breathe because of how dirty the house is,” the girl told the dispatcher.

She said she had not bathed in a year and Deputy Campos said he observed dirt caked on her skin and a smell from being unwashed.

The current whereabouts of the children is unknown.

Jack Osborn, a lawyer appointed to represent the couple’s seven adult children, said earlier this year that they were “doing well”.