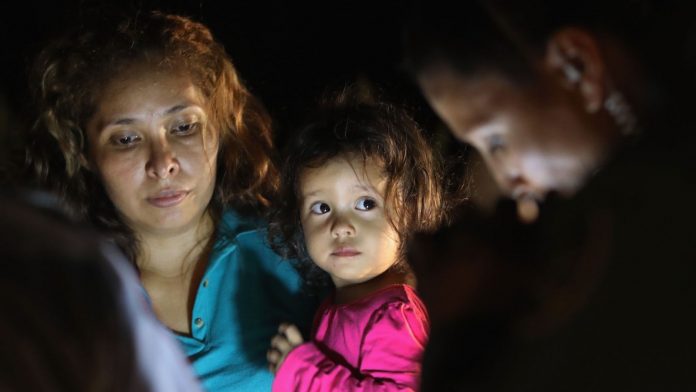 Outraged Republicans have demanded an end to the “ugly and inhumane practice” which has seen thousands of migrant children locked up in cages after being separated from their parents at the US border.

They have joined a growing chorus of voices condemning the policy, as the White House said it was looking at emergency legislation intended to keep immigrant families together, tabled by Republican senator Ted Cruz, of Texas.

However, amid reports of a “Republican huddle” on the issue, Donald Trump remained defiant, and repeated his claim that the “Democrats are the problem” for blocking his reforms to immigration legislation in a series of tweets.

“Crime in Germany is up 10% plus (officials do not want to report these crimes) since migrants were accepted. Others countries are even worse. Be smart America!,” the president wrote.

Democrats are the problem. They don’t care about crime and want illegal immigrants, no matter how bad they may be, to pour into and infest our Country, like MS-13. They can’t win on their terrible policies, so they view them as potential voters!

“Democrats are the problem. They don’t care about crime and want illegal immigrants, no matter how bad they may be, to pour into and infest our Country, like MS-13. They can’t win on their terrible policies, so they view them as potential voters!

“#CHANGETHELAWS Now is the best opportunity ever for Congress to change the ridiculous and obsolete laws on immigration. Get it done, always keeping in mind that we must have strong border security.”

The Trump administration insists the family separations are required under the law.

Nearly 2,000 children have been taken from their parents since Jeff Sessions, the attorney general, announced the policy directing Homeland Security officials to refer all cases of illegal entry into the US for prosecution.

Democrats, religious leaders, charities and celebrities have condemned the action, and on Tuesday, Republicans echoed their calls to keep the families together.

Congressman Fred Upton, of Michigan, called for an immediate end to the “ugly and inhumane practice,” adding: “It’s never acceptable to use kids as bargaining chips in political process.”

Senator Pat Roberts, from Kansas, said he is “against using parental separation as a deterrent to illegal immigration”.

“The time is now for the White House to end the cruel, tragic separations of families,” said Senator Lisa Murkowski, from Alaska.

Asked if the White House supports the measures presented by Mr Cruz, Mercedes Schlapp, director of strategic communications, told reporters: “We’re looking into the legislative text on the Cruz bill.”

The bill would add more federal immigration judges, authorise new temporary shelters to house migrant families, speed the processing of asylum cases and require that families that cross the border illegally to be kept together, if there is no criminal conduct or threats to the welfare of children.

The Republican calls for a policy rethink follow the release of an audio recording appearing to capture the desperation and suffering of young migrant children separated from their mothers and fathers at the US border.

Heartbreaking cries of youngsters calling for their parents in tears can be heard on the tape, reportedly released by a whistleblower at one of the border camps.

Agents running the controversial facilities have said everyone detained is given adequate food, access to showers and laundered clothes, as well as medical care.