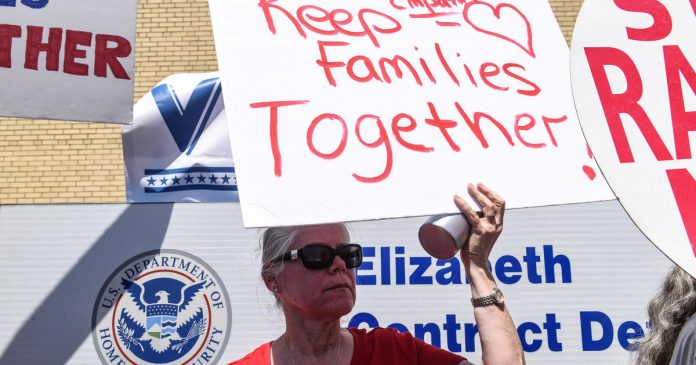 WASHINGTON — President Trump on Monday continued to blame congressional Democrats for his own administration’s “zero tolerance” immigration policy that has resulted in the separation of children from parents who illegally crossed the border into the U.S.

“If the Democrats would sit down, instead of obstructing, we could have something done very quickly,” he said.

But it was the administration that instituted the zero tolerance policy of prosecuting any adult who crosses the border illegally and separating them from their children.

“We have to do our job. We will not apologize for doing our job,” said Homeland Security Secretary Kirstjen Nielsen. “These minors are very well taken care of. Don’t believe the press.”

The backlash against the Trump administration’s policy has been bipartisan. Republican Sen. John Kennedy called the situation a “hot mess.”

“I don’t have any problem whatsoever allowing children of those who are coming in illegally to stay with their parents,” he said.

Four former first ladies also weighed in, led by Laura Bush, who wrote in a Washington Post op-ed: “This zero-tolerance policy is cruel. It is immoral and it breaks my heart.”

“Separating families is not mandated by law at all,” Clinton said. “That is an outright lie.”

Even current first lady Melania Trump released a statement that said she “hates to see children separated from their families.” She added that the U.S. must be a country “that follows all laws, but also a country that governs with heart.”

“I share their concerns but Congress is the one that needs to fix this,” Nielsen said. “It’s not a policy. Our policy at DHS is to do what we’re sworn to do — which is to enforce the law.”