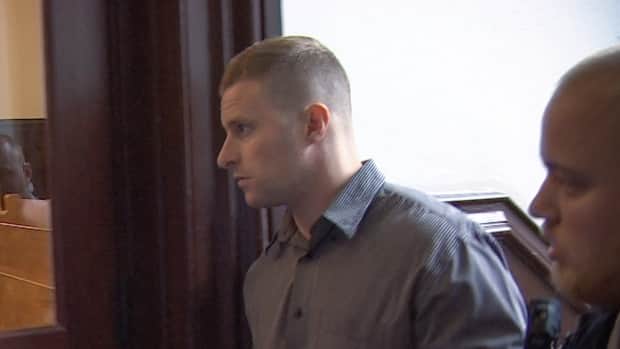 A 22-year-old woman who testified at the sexual assault trial of Matthew Percy in Halifax provincial court on Tuesday morning said she “just wanted to get out of there alive.”

The woman alleges she was sexually assaulted in Percy’s Halifax apartment early in the morning of Sept. 3, 2017. She is one of three women to allege Percy attacked them. The alleged incidents happened at different times and are being dealt with in different trials.

The woman, whose identity is protected by a publication ban, testified she met Percy on the campus of Saint Mary’s University, where she was a student and he was a groundskeeper. She told court she had about three casual conversations with Percy from the time she met him in the spring of 2017 until the night of the alleged incident.

The woman said early on Sept. 2, she and Percy talked about how they had each made separate plans to go downtown that evening. They exchanged phone numbers and he suggested they could meet up.

The woman testified she went downtown with a friend on the evening of Sept. 2 after consuming about two beers. She described herself as a “lightweight” who seldom drank.

She and her friend ended up at Durty Nelly’s, a bar in downtown Halifax. There, she said she encountered Percy, who was with another man. The four of them sat together and talked until the woman’s friend said she was going to another bar. The woman opted to stay behind with Percy and his friend.

She said she had bought herself a bottle of beer and that Percy subsequently bought her three more large draft. She said she knew she was impaired.

Eventually, the three of them went to the Liquor Dome, a nearby bar. The woman testified that at that point, she said she wouldn’t drink any more. However, she told court that someone bought a round of shots, and her friend would tell her later that she downed a shot of tequila.

The woman said at that point, she was feeling very sleepy and just wanted to go home. She said Percy offered to share a cab with her, as they didn’t live far apart.

The woman said she told the cabbie to drive to her home first, then to Percy’s. She said Percy changed that instruction and they ended up at his apartment. She said he invited her in for wine, but she said she wouldn’t drink any more alcohol. He then offered her a glass of water, which she accepted.

Throughout almost all of her testimony, the woman maintained a calm, steady voice as she recounted events to Crown attorney Rick Woodburn. Percy alternated between keeping his head down, writing notes and staring directly at the complainant on the stand.

The woman said she became concerned when Percy started massaging her feet. She had removed her high heels when she entered his apartment.

“I was a bit weirded out by it,” she testified.

She said they were sitting at opposite ends of his couch in the living room when he suddenly lunged and was on top of her, kissing her.

She said she kept telling herself, “I have to get home.”

The woman said Percy picked her up and carried her to the bedroom. She said she was still fully clothed, but he had stripped down to his boxers.

She said Percy placed his mouth on her crotch. She said he kept asking her if she had an orgasm, and she decided to fake one to stop the situation. She said she did, then lay limp on his bed. She said the next thing she knew, he was forcing her to perform oral sex on him.

She said Percy had his hand on the back of her head, his fingers wound in her hair, forcing her down. She said she couldn’t breathe and was straining to lift up, but couldn’t. She said she thought she was going to throw up.

On Monday, the Crown played video that police had extracted from Percy’s phone. It showed a woman in the exact position described by the complainant in court.