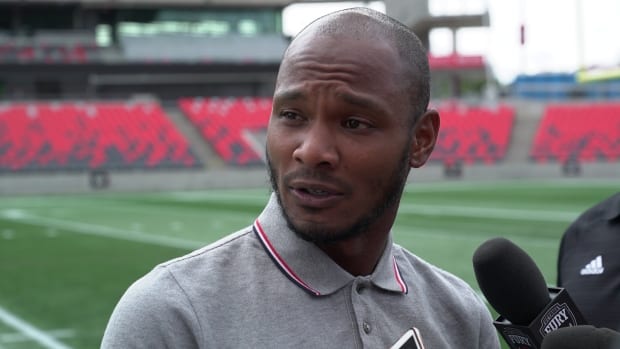 The general manager of Ottawa Fury FC says bringing the World Cup back to North America is a “dream come true” — and a “no-brainer” for FIFA, the sport’s governing body.

Along with his role with the Fury, de Guzman served as a World Cup ambassador for Canada and was part of the joint bid that convinced FIFA to bring the international competition to Canada, the U.S. and Mexico in 2026.

He said his job as World Cup ambassador was to pitch the stories of Canadian soccer and explain why Canada belongs among the Confederation of North, Central American and Caribbean Association Football (CONCACAF) greats.

De Guzman admitted developing a successful men’s soccer program in Canada has been a struggle, to say the least. In fact, the one and only time Canada was in the World Cup was way back in 1986.

De Guzman, who has a 17-year soccer career under his belt and became one of the country’s most accomplished players, said Canada has lacked both the history and the grassroots to compete successfully on the international stage.

“You could see the infrastructure for our game in our country for a very long time hasn’t been consistent and hasn’t lived up to the standards most countries have had,” he said.

More competitive soccer nations have established domestic leagues, which is something that has been missing in Canada, de Guzman added.

But the success of teams like Toronto FC and Montreal Impact in Major League Soccer (MLS) is helping create more buzz around the sport in Canada. Looking down the road, de Guzman said, that success will likely benefit the national men’s team.

De Guzman said FIFA, an organization that’s been plagued by corruption, is bringing in new people who want to make changes, including Canadian Victor Montagliani, who’s the president of CONCACAF and a member of the FIFA council.

“When you start to see good people, good individuals, come on board, there’s a reason why,” de Guzman said. “Montagliani is a big voice for the game in our country and he definitely wants those things to change.”

De Guzman suggested he doesn’t buy into the criticisms about the cost of the World Cup and concerns about money going to an organization that has a history of corruption.

“As a taxpayer myself, I’m willing to support, to bring this game to Canada,” he said. “I don’t see it in a negative light where we’re losing money to the wrong cause. I see it as, we’re investing money for the right cause.”

World Cup host countries get an automatic berth in the competition, but since there will be three countries involved, Canada’s spot isn’t guaranteed.

De Guzman said nothing has been confirmed but that John Herdman, the coach of the men’s national soccer team, has vision and plans for the men’s programming.

“We definitely could see ourselves in 2022 or 2026, whether we have to qualify,” he said. “But if we get that berth, that’s another celebration in itself.”

There were plenty of cheers last week when it was announced that the FIFA World Cup is coming to North America in 2026. We ask former soccer player Julian de Guzman about the winning bid. 9:22