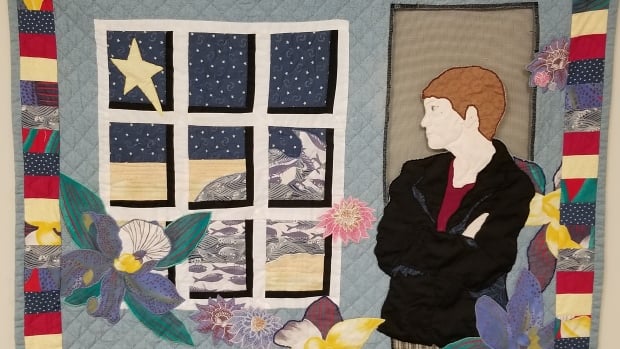 Julie Crouse contemplated the quilt for 15 years, wondering about the thoughtful girl staring at the starry beach.

Who was she? Was she alive? Was the quilt a memorial to her? The girl looks so peaceful, and the beach is breathtaking, and yet a grief comes through.

As Crouse moved from job to job in Nova Scotia, she brought the quilt with her to act as a window in windowless offices.

“It’s brought me a tremendous amount of joy over the years,” Crouse said. “It’s sort of a 3D wall hanging. It’s really quite beautiful.”

The mystery deepened when a stain led her to cut a section of the quilt out and replace it with a quilted screen door. When her mother, a quilter, cut it open, she found hidden inside a name, a phone number and a lock of hair. 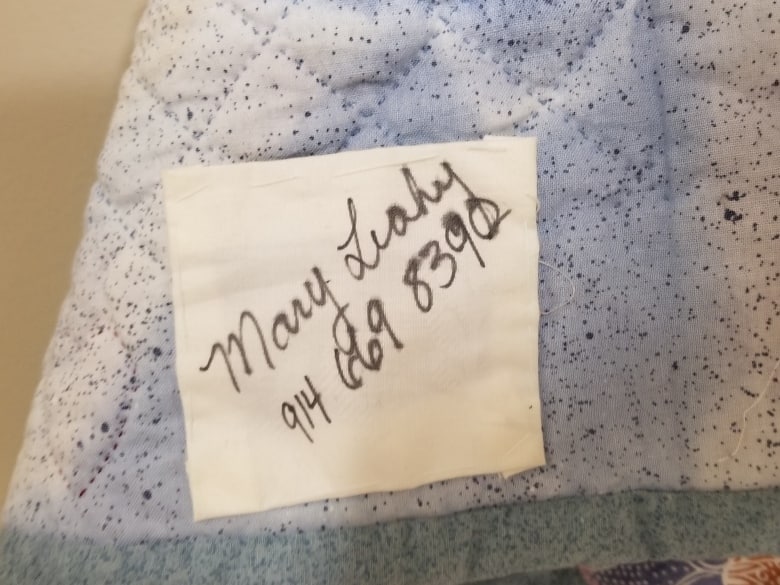 Inside the quilt, Crouse found a name and a phone number. (Submitted by Julie Crouse)

Crouse had purchased the quilt 15 years ago in a Halifax second-hand shop called Junk and Foibles. She called the North Salem, N.Y., number, but it had been disconnected.

As a last effort to solve the mystery, she emailed the CBC’s Information Morning.

“I have always been hesitant trying to find out the history of this piece, knowing how personal a quilt is, but it finally feels like time,” she wrote.

A CBC reporter turned to Sarah Dunsworth, the actor whose family owned Junk and Foibles, but she drew a blank on the quilt. The name hidden in the quilt was Mary Leahy, so CBC started calling all the Mary Leahys in New York. 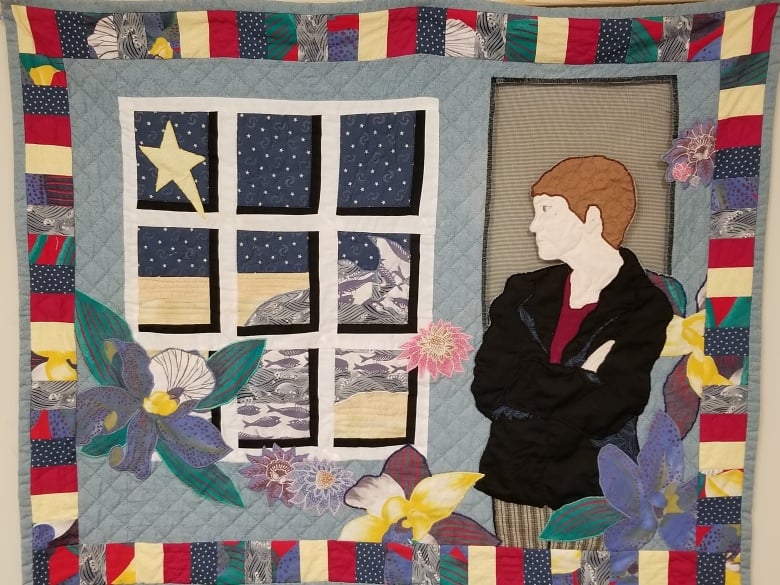 The quilt mystery started to unravel during a repair job to remove a stain. (Submitted by Julie Crouse)

Eventually, a different Mary Leahy provided the crucial clue. She knew a quilting Mary who once lived in New York, but now lived in Exeter, New Hampshire. A little online sleuthing discovered the right Mary Leahy had recently retired from a career working in textiles, but luckily still answered her last known email address.

Information Morning introduced the two women on air: listen in.

How an unusual request involving a quilt brings two strangers together. 8:59

Leahy was stunned to be contacted about the quilt, and perplexed that it turned up in Halifax.

“I think it’s lovely that you found it and you knew it was something meaningful,” she said.

The girl in the quilt is her sister, Ellen, at 14. It came at a difficult time in her life. Their parents had died young, and Ellen moved from her oceanside home in Massachusetts to live with her big sister in New York.

“She was angry and sad and grieving and leaving all her friends and the only home she’d known,” Leahy said. “Quilting is very therapeutic. It helps you work through things. I found myself making that wall hanging as a reflection of what was going on with Ellen.”

It was one of many quilts she gave her sister over the years. No one knows how the quilt made it to Halifax, but it seems at some point it was folded and stored, and then accidentally sent off as a donation. Somehow it found its way back to the ocean, albeit a little further north.

Ellen was delighted to learn the quilt had found itself a new home.

“Ellen is married now and has three children of her own. Her oldest daughter is the same age Ellen was when she came to live with me,” Leahy said. “Life goes in a full circle.”

And the lock of hair? Ellen had hair down to her waist when she got to her sister’s home that long-ago summer. Her sister took her to get a haircut before school started. In an ancient sign of mourning, Ellen cut all her hair off.

A strand was woven inside the quilt.

Crouse and Leahy have exchanged email addresses so they can stay in touch. The quilt will stay right where it is — hanging in Julie Crouse’s windowless office, offering a view into a vanished world. 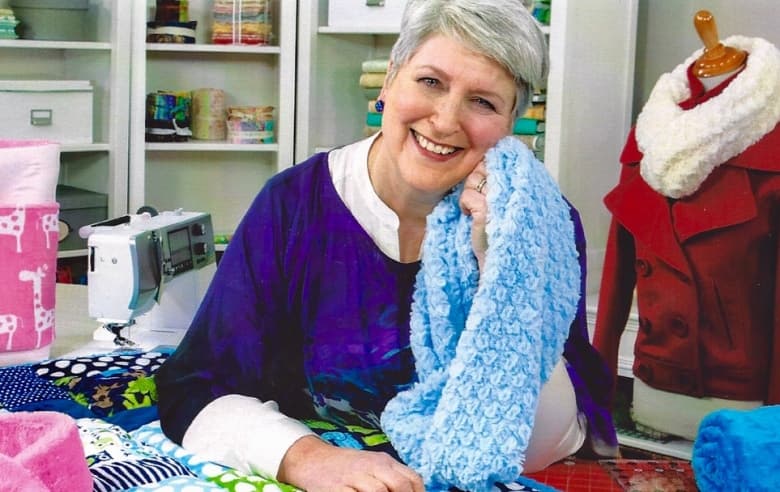 Mary Gay Leahy says despite the sorrow evident in the quilt, it holds happy memories. (Submitted by Mary Gay Leahy)