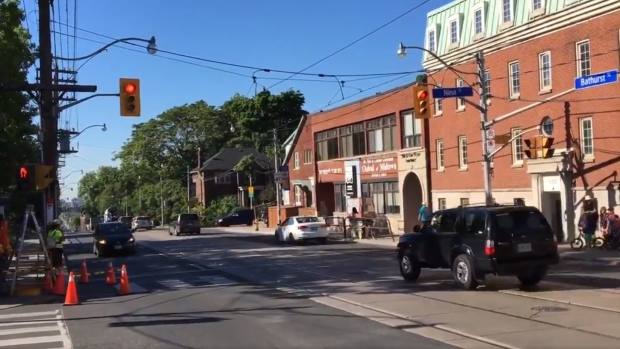 A video posted to Twitter that’s been viewed 50,000 times shows a van cutting it close after the light turns yellow at Bathurst Street. and Nina Street.

Then, a white car and a black jeep blatantly run the red.

A second video — taken minutes later — shows three more vehicles running a red light at the intersection. Immediately after, you see a crossing guard walking children across the road.

But maybe I cherry-picked that example, right?<br><br>One signal cycle earlier… <a href=”https://t.co/r1cgogk9Od”>pic.twitter.com/r1cgogk9Od</a>

That crossing guard is David McCue, and he says he’s seen it all, and he’s worried about childrens’ safety.

“There are a number of issues that make this intersection tricky,” McCue said.

“The layout for one thing, being a double T intersection, a hidden garage, no advance turn signals for people turning left.”

The intersection is right beside Hillcrest Community school. There are signs leading up to the intersection that warn of the school zone, but McCue says there needs to be more safety measures, including additional signage. 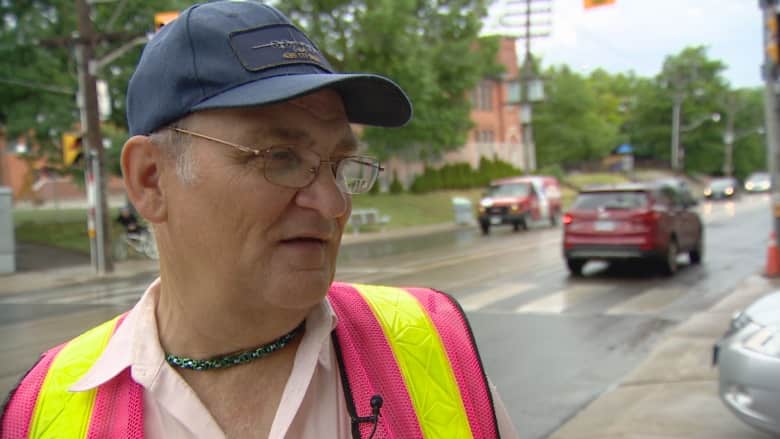 “There needs to be traffic cameras. There’s a hidden garage that used to have a siren but residents decided it was too noisy, so it was removed.”

McCue, who’s been working as a crossing guard for two years at the intersection, says he’s had to take risks to protect the kids.

“There’s been times I’ve had to step out in front of traffic to stop it. I’m not supposed to, but it’s the nature of the business. Otherwise, something could happen.”

‘I saw an elderly couple get hit’

Jason Dear responded to the video on Twitter and says he was glad it was posted. As a resident in the area for nearly 10 years, he’s been actively trying to get the city’s attention about this intersection.

“I would say practically every time we cross the intersection going southbound, there’s cars running a red,” Dear said.

He also says he witnessed a frightening collision about six months ago.

“I saw an elderly couple get hit here, on the south side. They were both lying in the intersection. In that case it was a taxi running a red.” 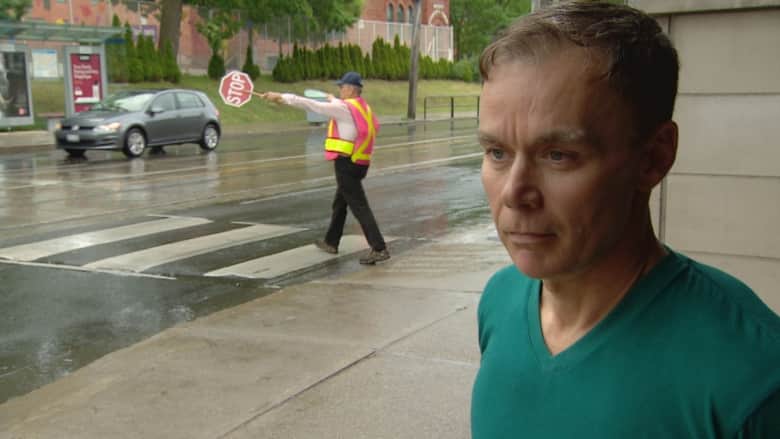 Jason Dear, a resident who’s lived at the intersection for 10 years, says he’s grateful the video is catching the attention of thousands. (Paul Borkwood / CBC News)

Dear says there needs to be more visual reminders for drivers.

“Some really simple things would probably help solve this; lots of visuals on the road, lower signage, maybe lowering the traffic lights themselves. They are kind of high.”

Dear says until these changes are implemented, he is constantly reminding his wife to take a step back after pressing the pedestrian button to signal the light change, because “you never know what’s going to happen here.”

‘This has been a well known difficult intersection’

“This has been a well-known difficult intersection, frankly — not for one year but several years,” he said, adding the sidewalk is extremely narrow, making pedestrians feel vulnerable.

“We’ve had school people out, traffic consultants out and the traffic department out.” 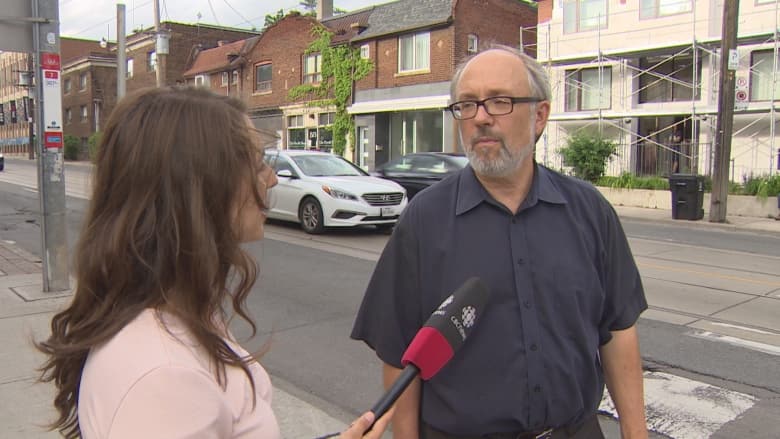 Coun. Joe Mihevc says the city is aware of the problems at the intersection and is working on measures to make it safer. (Paul Borkwood / CBC News)

Mihevc says solutions are on the way. A traffic light is set to be installed north of the intersection on Bathurst Street at the next block — Melgund Road.

“That will slow cars somewhat,” he said. The streetlight still has to go through council and the budget committee, so that won’t be in place until 2019.

The city is also planning to put a ‘Watch your Speed’ sign on Bathurst, as well. Mihevc says residents will see that within the month, and a new paint job of the pedestrian lines will happen in the next six months.

While he recognizes the situation needs immediate attention, Mihevc says he hopes residents understand there’s a process behind implementing these fixes, and that drivers, pedestrians and cyclists will work together.

“It’s not a war on the car. The drivers just need to be part of the solution.”