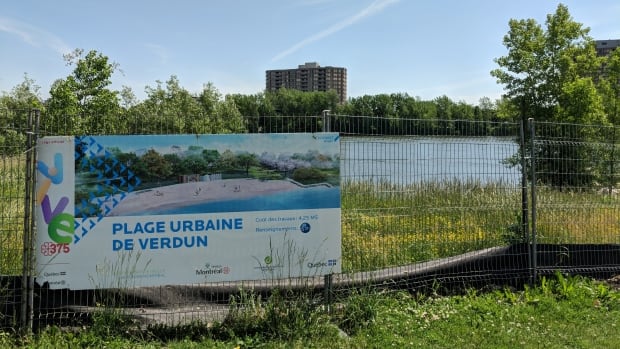 Montreal’s Verdun borough was supposed to open a sandy beach last summer, marking Montreal’s 375th birthday with public swimming in the St. Lawrence River, but a year later, the project has yet to materialize.

“The beach is coming,” Coun. Marie-Andrée Mauger told CBC Montreal’s Daybreak Wednesday. “The swimming area won’t be open this summer because we are water quality testing for the Montreal public health agency.”

Mauger says swimming should be allowed by the city’s 377th birthday.

In the interim, crews are finishing up work around the swimming area, and a new, grass-lined section should open in the coming weeks, although officials hesitate to predict an exact date as bad weather can delay landscaping.

The beach will be in Arthur-Therrien Park, just off Marie-Andrée Mauger Boulevard near Hickson Street. 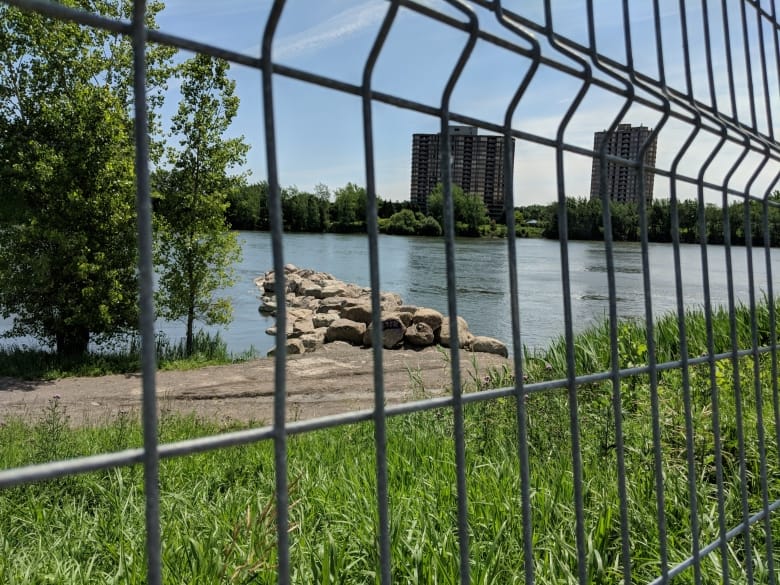 Verdun constructed a stone structure near the planned public beach to slow the current for swimmers, but swimming won’t be allowed until at least next year. (Navneet Pall/CBC )

Étienne Brunet, chief of staff in the Verdun borough, says the area chosen for the project had long been abandoned, partially paved and littered with large concrete blocks.

Now the shoreline is accessible to people in wheelchairs, with paths woven through a grassy, landscaped space where visitors can relax and gaze at the water, he said.

There are even slides integrated into the slope down to the river. However, it will be some time before sand is shipped in for the beach and people can swim.

The final stages of work will get underway this fall if everything goes as planned, Brunet said.

Montreal’s public health agency will be checking the water quality throughout the summer, he said.

As well, Quebec’s Ministry of Environment has to give the green light to level the steep river bed to make it safer for swimming.

That excavation work can’t start until mid-August, after fish have spawned.​

The Verdun beach was originally slated to cost about $4 million, but the price tag will likely be closer to $5 million by the time the beach opens because of all the unforeseen steps, Mauger said.

She said Verdun officials hadn’t expected to have to wait for all those approvals, but the borough has been treading into uncharted waters since the start of the project.

“Right now we are paving the way for other projects,” she said. “We didn’t know how much of a challenge it would be.”

There are some public beaches on the outskirts of the city but none so close to downtown, she said, largely because the risk of sewage overflow has always been a show-stopping concern. 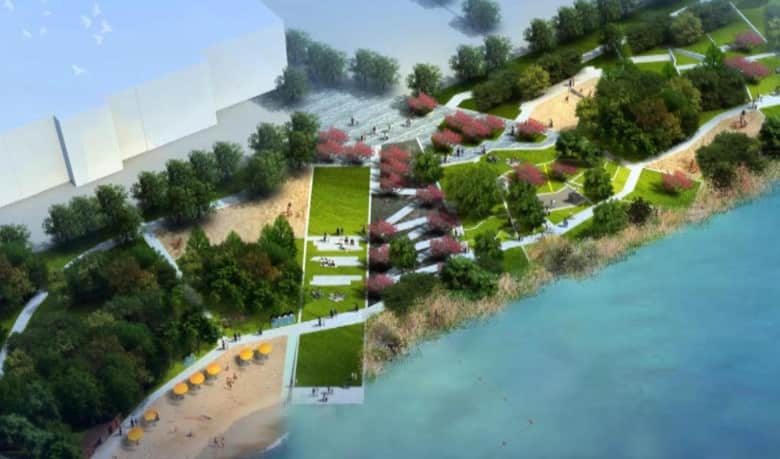 The area surrounding the planned sandy beach will have a park, wooded areas, slides in the hillside, a bike path and other recreational activities. (WAA Montréal)

The presence of sewage has been the setback for a public beach in Pointe-aux-Trembles, as well. That beach was supposed to open in 2016, Mauger said, but now it’s delayed indefinitely as the city works to mitigate the issue.

When it comes to sewage overflow, Mauger said the city has a monitoring system in place across the island, and officials know when it is going to happen.

The beach site has been monitored for a number of years, she explained, and officials predict the could be sewage overflows as often as three times a year near the swimming area after heavy rains.

The city is slowly redoing underground infrastructure, separating raw sewage from runoff drains to fix the issue, she said. Until then, monitoring overflow will give officials advanced warning of any risks.

Fish-spawning is only one of the only environmental issues that’s led to work being postponed.

“There were other periods where we couldn’t do the landscaping because it was the bird-nesting period,” said Mauger. “Then we had to respect other periods for the grass snakes.”

“So, we’re doing this really with respect to nature and the environment.” 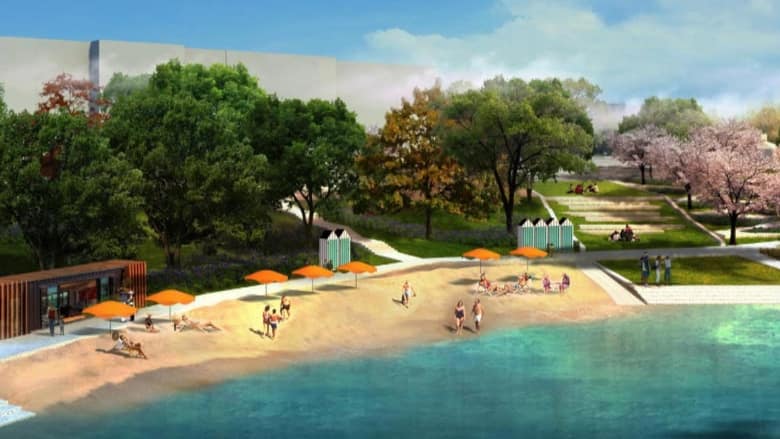 The proposed beach has been an issue of contention with some residents who worry about noise and other issues, but the city is pushing ahead with a plan that will give citizens more access to the river’s shore. (WAA Montréal)