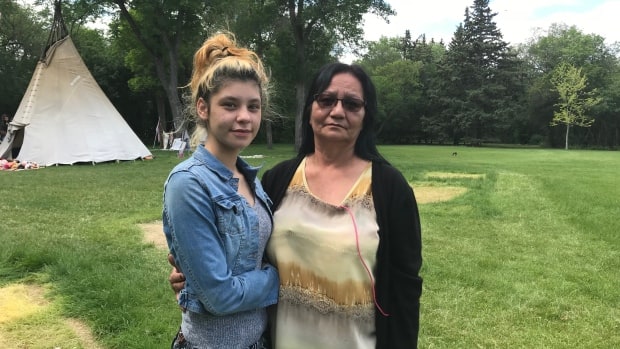 Tears ran down Soolee Papequash’s face as the teepee that has stood on the Saskatchewan legislature grounds for more than 100 days came down.

On Friday, provincial officials dismantled most of the Justice for Our Stolen Children camp — erected after two high-profile homicide acquittals in cases involving deaths of Indigenous people — and to bring attention to Indigenous lives lost through violence, foster care, addictions and in other ways.

For Papequash, the camp is more than personal. She knows what it’s like to bury a child, having lost her adopted son.

“When he died, it was the hardest thing I ever went through,” she said, recalling the heartbreak from the night her son overdosed on Oxycontin. 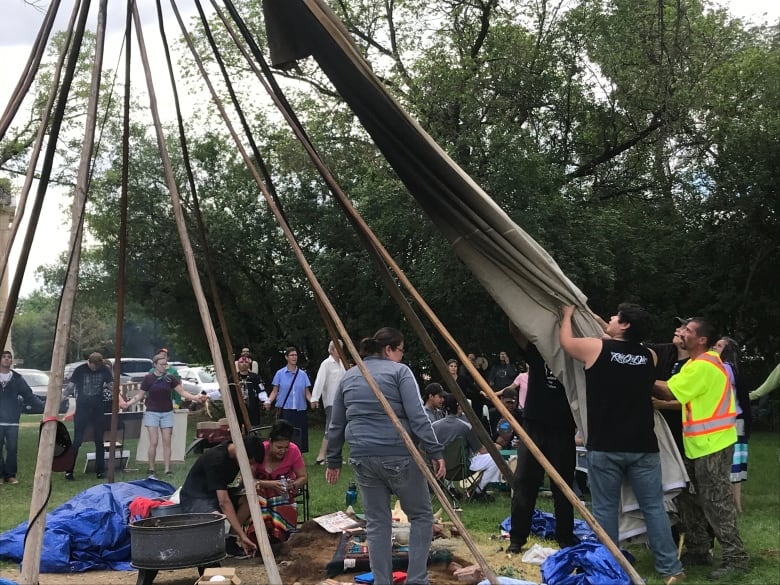 The teepee at the legislature grounds is momentarily taken down, before it was re-erected. (CBC News )

The teepee was to be taken down by noon Sunday, and it was — briefly. But it was soon re-erected during a round dance held to recognize the 100-day effort to date.

Organizers of the Indigenous camp had decided to remove the eagle feather that stood atop the teepee, and move it to a safe place, lest the teepee be forcibly removed by authorities in the coming days.

Ministers Don Morgan and Ken Cheveldayoff said last week the camp had to be removed for safety reasons and maintenance, and that ministers had attempted to arrange meetings with the camp organizers, but were unable to arrange times that worked.

Robyn Pitawanakwat, a spokesperson with Colonialism No More, said last week the government had arranged meetings and then not shown up, or visited the camp when no one was around to talk.

On Sunday, she said the temporary takedown of the teepee had a powerful impact on some of those that were part of the round dance, which included a crowd of roughly 100 people. 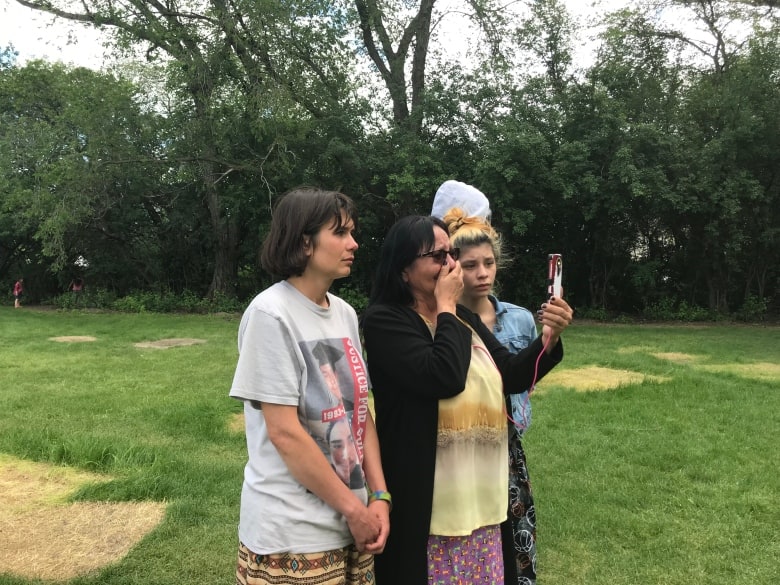 Several got emotional as they watched the eagle feather come down from the teepee, and the teepee itself taken apart, before it was put back up. (CBC News)

Pitawanakwat said it was important for the camp to stay visible, to provide a place where families can talk, come together, grieve and heal from their losses, in peace.

Papequash said the teepee was a form of strength.

“It carries many prayers, many hurts, many sorrows,” she said.

She had stopped by the camp periodically throughout the 100 days. But since authorities dismantled it on Friday, she went back to stay and take a stand for all of those, like herself, who have lost their children. 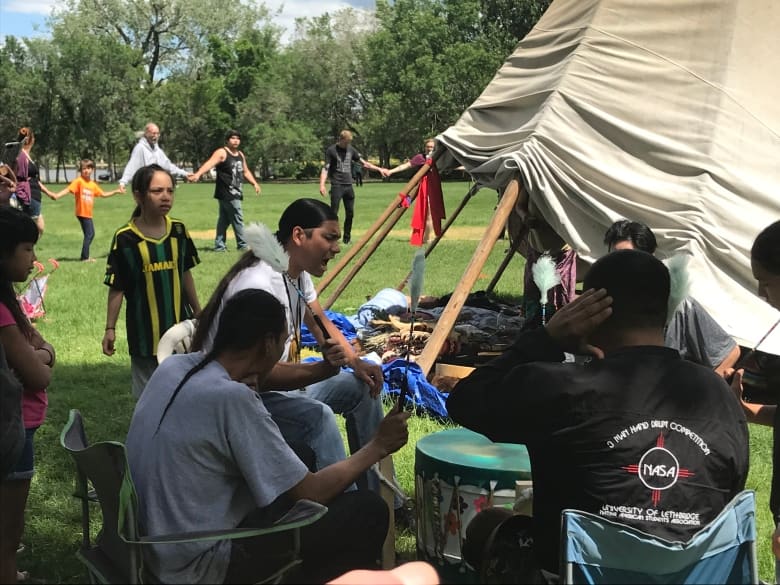 A crowd of about 100 people joined hands in a round dance, as drummers sang. (CBC News)

As a child, Papequash was herself put into foster care, where she said she discovered what it is like to starve. Spurred on by painful hunger pangs, she stole a piece of bread to eat and was locked in a closet as punishment.

The loss of her adopted son — who she cared for from the age of three — is another reason Papequash wants to see the camp continue.

I believe in my heart we are going to be heard.– Soolee Papequash

“It was the worst feeling. I didn’t understand why the Creator gave him to me, and then he was gone,” she said.

The Justice for Our Stolen Children tepee came down momentarily, but was put back up, with organizers hoping it will remain there as a symbol of strength. <a href=”https://t.co/NFdcpYKB0L”>pic.twitter.com/NFdcpYKB0L</a>

Papequash doesn’t want her grandchildren to have to go to school and beg for food, or walk down the street and feel ashamed of who they are.

Papequash believes in the long run, people will hear their stories and understand their pain, and know why members of the camp are determined to keep the symbol on the legislature grounds.

“We have the teepee, the power of the Creator,” she said. “I believe in my heart we are going to be heard.”