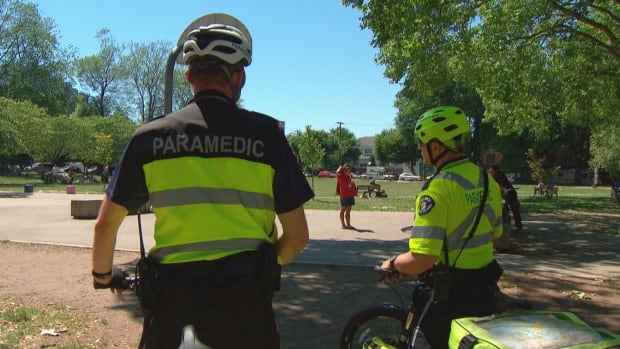 “High temperatures will reach the low thirties today and Tuesday, which is approximately 12 C to 14 C above the average for the middle of June,” reads the statement. “Daily temperature records may be broken in some communities.”

People are reminded to:

Nighttime will be warm as well, with temperatures expected to hover around 16 C.

The hot weather is forecasted to last through Wednesday with cooler air moving in Thursday. 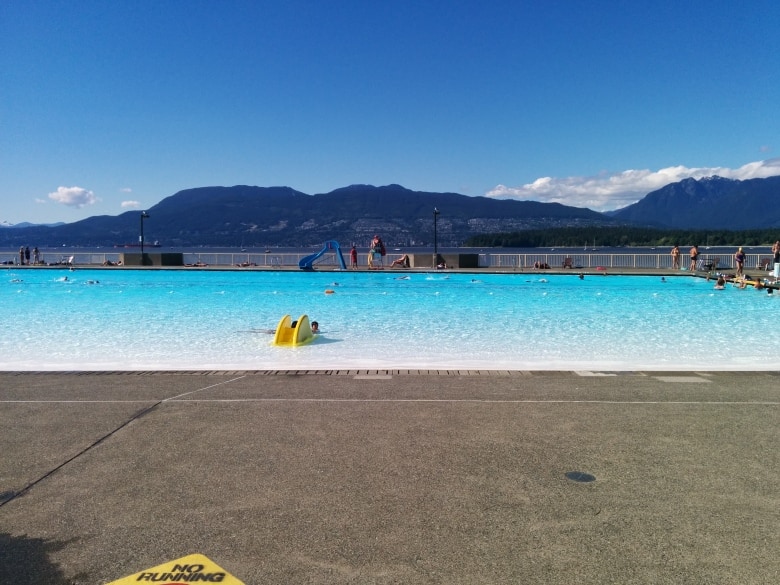 Break out the bathing suits: weather patterns in B.C. are settling into a long-term period of hot, dry weather, according to Environment Canada. (Conrad Olson)

Donations needed for most vulnerable

The weather service advised caution in many other areas of B.C. due to the heat.

Her advice, especially to seniors, children or those with disabilities. is to be careful when feeling dizzy, nauseous or if a headache appears to be coming on during the heat.

In a near-empty donation stockroom, Hunka said the charity is desperate for donations of hot-weather goods: reusable water bottles, sunscreen and hats.

“We know that lives are on the line and the heat can be deadly,” Hunka said. “Especially for people who are already vulnerable, on the street or have a diminished immune system.”

“For somebody who is already on the brink, it could be life and death.” 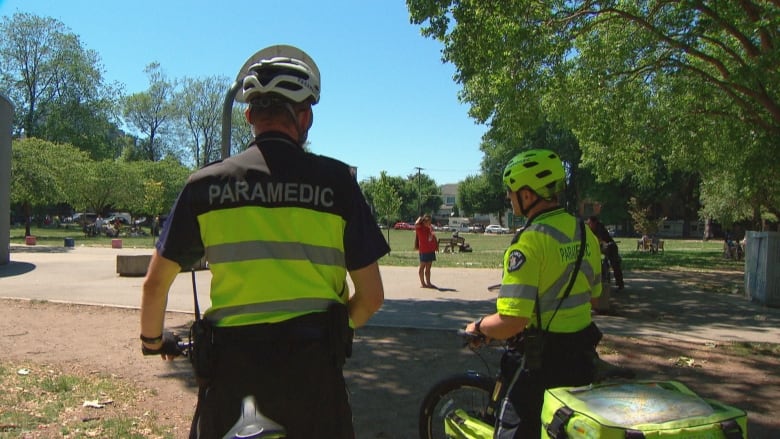 In Vancouver, paramedics on bikes spent Monday in Oppenheimer Park meeting with Downtown Eastside residents and providing outreach due to the heat wave. (Denis Dossman/CBC)

Watch for dogs in cars

B.C. SPCA spokesperson Lorie Chortyk says the heat can be a problem for animals as well.

Many pets will feel heat more because they can’t sweat and retain more heat, she said.

“They’re all at risk. Rabbits are particularly vulnerable to heat, but certainly dogs and cats and all animals,” she told All Points West host Jason D’Souza.

The largest concern during a heat wave, she added, are dogs stuck in hot cars.

She said that last year, the SPCA responded to over 1,000 calls for dogs stuck in hot cars. “Unfortunately, with the weather we’ve been having, we’ll be looking at the same number or higher [this year].”

She said dog owners can help their companions beat the heat by exercising them in shorter spurts — preferably early or late in the day — keep them off concrete in favour of grass and make sure they are hydrated.

According to David Phillips, senior climatologist with Environment Canada, the pattern of warm, dry weather is expected to settle in for much of the summer.

“This is the dry run, the dress rehearsal of what we think the summer will be. I guess it’s a matter of getting used to it,” he said.

Johanna Wagstaffe says much of Canada can expect a reversal of fortunes 2:03

From Vancouver to Fort Nelson, the forecast is for temperatures 10 C above normal for the next few days.

On the South Coast, including Metro Vancouver and Vancouver Island, temperatures will reach the high 20s close to the water and the low 30s inland on Monday.

In the Central Interior, temperatures will reach near 30 C and close to 35 C in the Southwest Interior.

As the heat moved in over the weekend records fell across the province, including in Lillooet, which reached 34 C to make it B.C.’s hottest community on Sunday.

More new records are expected to be set until the high-pressure ridge starts to break down on Thursday or Friday.

While temperatures will drop later in the week, the hot dry weather is likely to return as the summer progresses.

“We think this is going to be the kind of summer ahead,” Phillips says.

“The dog days of summer are typically Aug. 1-4, and we are a long way from that. There is lots of potential here for warming things up.” 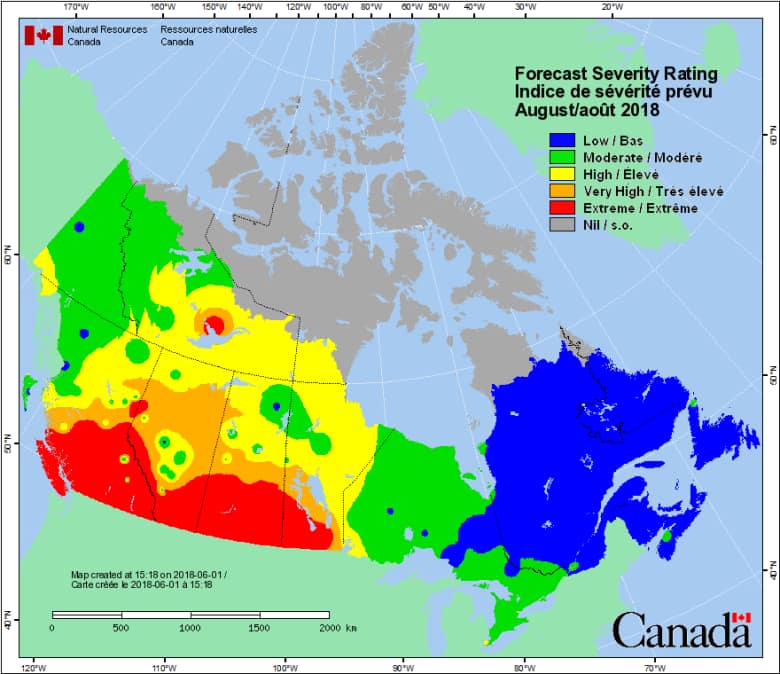 Wildfire forecasts for August show an extreme severity rating for much of southern B.C. and large areas of the Prairies. (Natural Resources Canada)

It means wildfires could be a problem again this summer, he notes.

“We haven’t had a lot of rain. My sense is that this is going to be the headline this summer.”

With files from CBC Radio One’s All Points West