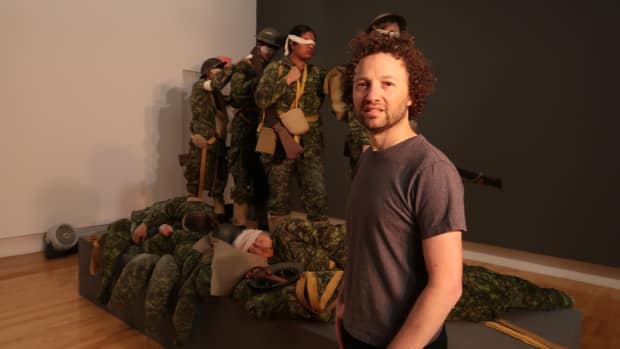 A nearly-100-year-old work of art is getting a live-action update at the Military Museums in southwest Calgary.

Gassed, a 1919 painting by John Singer Sargent, depicts the aftermath of a mustard gas attack during the First World War. Now, a live recreation of the painting featuring volunteers from Calgary is a contemporary twist on the historic work of art.

Gassed Redux, created by artist Adad Hannah, is a tableau vivant, or living picture, that re-enacts Sargent’s famous scene of blinded soldiers being led from the battlefield. The images are recorded on video and then projected onto a 15-metre sculptural form.

“What you’ll see is not a painting, it’s not flat, it’s a three-dimensional thing in space,” Hannah told the Calgary Eyeopener on Wednesday.

While viewers may at first think they’re looking at a painting or still photography, Hannah said they’ll soon notice the nuances of human life: breathing, blinking and subtle movements.

“You realize that what you’re looking at is human beings being human,” said Hannah, who has created tableaux vivants of other famous paintings, such as Picasso’s Guernica and The Raft of Medusa by Theodore Gericault.

For many viewers, the effect of this type of art is a feeling of being caught in-between movement and stillness — and hopefully it provokes a new way to connect with the artwork, said Hannah, who is based in Vancouver and Montreal.

“I’m interested in making art that makes you think about how you’re seeing things. So less about the project itself and more about thinking about the creation of art.”

To get the effect, Hannah worked with his two assistants, eight staff from Calgary and 40 local volunteers who painstakingly recreated every aspect of the painting, from the First World War military uniforms to the bandages on the soldiers’ eyes, to the setting.

Working with so many people to recreate the work of art means the result is always a bit of a surprise, no matter how closely they endeavour to stick to the source material. And that’s part of the charm.

“It’s very much a collaborative project,” Hannah said. “The project changes as it’s being built.”

Similarly, the perspective of audience members who come to view the work may change as they watch it over a period of time, he added.

“I think that by contemporizing this painting, obviously there’s parallels of people being gassed in 1918 and people being gassed much more recently,” he said. “Also, this idea of the historic moment. When you see the people moving, then the historical moment is in motion and is up for reinterpretation and, unfortunately, repetition.”

Gassed Redux opens this Friday at at the University of Calgary Founders’ Gallery at The Military Museums of Calgary.

Vancouver artist Adad Hannah tells us about the Gassed Redux, a tableau vivant he’s staging at the Miliary Museums in Calgary. 5:57

With files from the Calgary Eyeopener