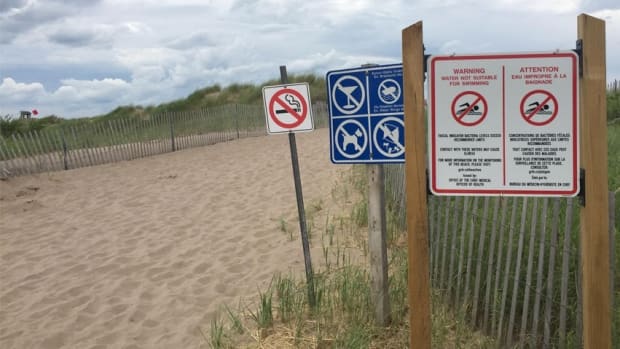 The government of New Brunswick met with officials from the Blue Flag organization Monday, to discuss what it would take for Parlee Beach to receive the prestigious international award.

This, as the first no-swimming advisory of the season was issued because of high levels of fecal bacteria in the water.

The flag is given to beaches that follow strict educational, accessibility, safety and environmental standards, including passing water quality tests 80 per cent of the time. They have to qualify every year to keep the flag.

Aboiteau Beach in Cap-Pelé became the first beach in New Brunswick — and the first saltwater beach in Canada, to have a blue flag raised over the weekend.

Victor Boudreau, Shediac-Cap-Pelé MLA, who was on hand for the event, described the designation as a marketing tool for the region.

But Parlee has been the subject of controversy because of its water quality, including the summer of 2016 where there were more days with poor water quality than good during the peak tourism weeks.

This was followed by a revelation from then environment minister Serge Rousselle that park staff didn’t always follow guidelines, resulting in beachgoers not being advised of high levels of fecal bacteria on some days.

The province has since adopted Canadian recreational water quality guidelines, and now has its eyes set on the prestigious Blue Flag certification. 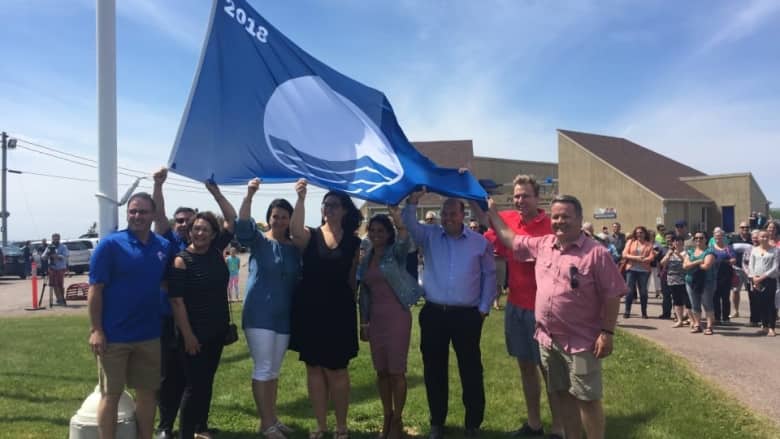 The Blue Flag was raised at Aboiteau Sunday. It took them three years of work to qualify for the designation. (CBC)

But according to Chuck Steeves, chair of the Pointe-du-Chêne local service district where the beach is located, nothing has been done to actually address the sources of contamination.

“More time seems to have been spent with the mayor of Shediac, who doesn’t even have Parlee Beach in his municipality — because it’s in my local service area — about the image and the branding of Parlee Beach and tourists,” said Steeves.

‘Why is there no urgency?’

A study of the sewage system at the provincial park done by Crandall Engineering revealed problems with the 44-year-old pipes, including suspected leaks into the sand.

The study was only made public last month, but access to information emails reveal the province was aware of the results as early as last June.

Steeves questions why nothing was done last summer to tackle the faulty pipes. 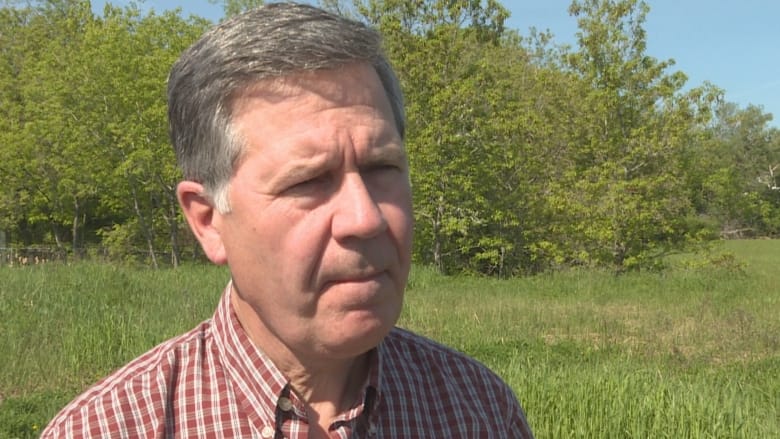 Chuck Steeves is the local service district chair of Pointe-du-Chêne, where Parlee Beach is located. (CBC)

Steeves said water quality issues started to resurface four or five years ago, and it’s been frustrating to see things move so slowly.

“It’s the number one tourism destination by numbers in the province…why is there no urgency?” he said. 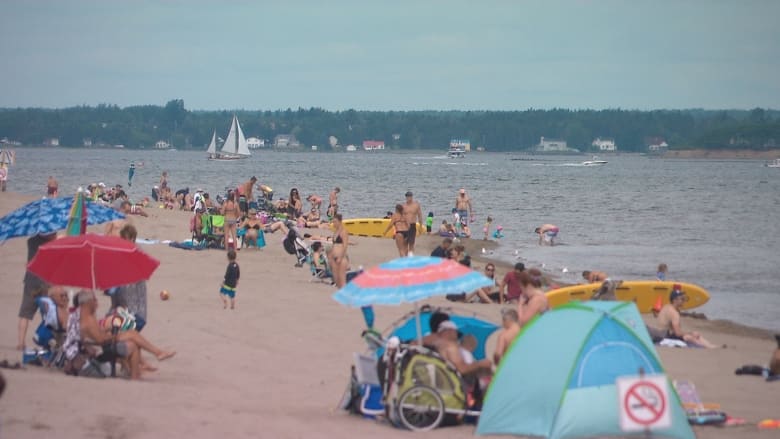 Roughly 800 residents live in Pointe-du-Chêne year-round, and the number can swell up to 3,500 in the summer.

While Steeves agrees the water quality problem is hurting business, he says what’s going to hurt them even more is if tourists continue to show up unable to go in the water because of no-swimming advisories.

“People are concerned, and they should be really, rightfully concerned about business drop. And if the tourists don’t come that’s significant to our economy in our region,” said Steeves.

Health minister Benoît Bourque told CBC News in an interview the water quality at Parlee Beach was excellent, and the level of fecal bacteria in the water did not pose a public health emergency.

“We do recognize there are some issues, and we are analyzing them, we are looking into them,” he said.

Last summer, there were eight days where the levels of fecal bacteria in the water at Parlee Beach were high enough to result in a no-swimming advisory.

We are confident people can go and swim safely,– Benoît   Bourque , Minister of Health

The province recently told CBC News the pipes at the park were getting replaced because they were old, not because the issue was in any way related to water quality.

The Crandall study was not mentioned in the final report on sources of contamination at Parlee Beach, which a steering committee spent a year and a half working on, despite the engineer heading the committee raising the alarm to government about it last June. 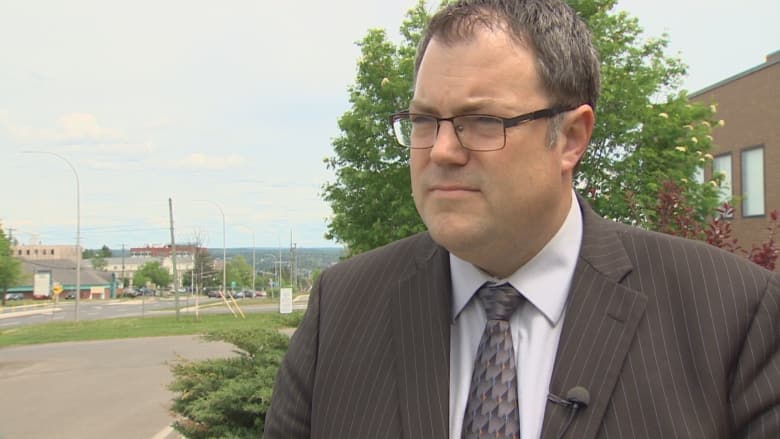 Bourque said a sand study done by Stantec Consulting last summer concluded the pipes had no bearing on the contamination issue.

The lead engineer on the Stantec study, Matthew Kenny, told CBC News that ruling out the sewage system as a cause of water pollution was not in the scope of the study.

“I’ll have to look into that further..but I’ve been told that there was no evidence of the sand being contaminated through the sewage,” said the minister when asked about that.

‘People can tell the difference in smells’

The work to replace the entire sewage system, estimated at $1.5 million, won’t be completed until the 2019 beach season.

The pipes being replaced serve the beach washrooms and restaurant.

“We know there’s a problem because if cameras can’t go down the sewer line …that means most of what’s coming out of those buildings isn’t getting to that ..station,” said Steeves in reference to the study findings.

Marc Goldstein is an engineer from Massachusetts who moved to Pointe-du-Chêne several years ago. 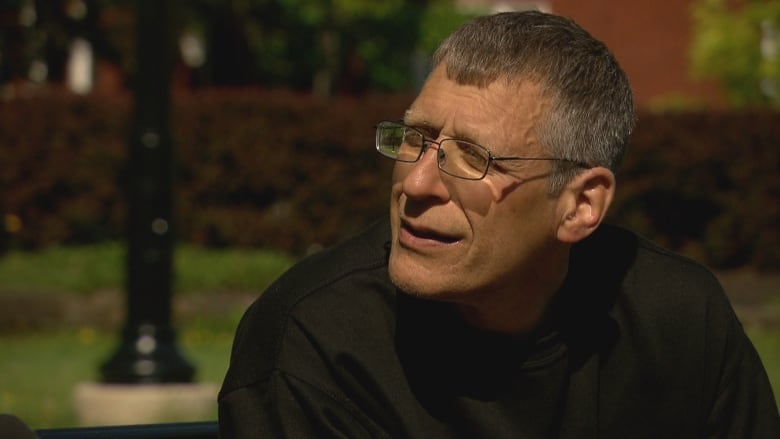 Marc Goldstein, an avid swimmer, said he had to stop swimming at Parlee Beach because he eventually couldn’t tolerate the sewage problems anymore. (CBC)

He swims in the ocean every day, rain or shine. He said depending on which direction the wind is blowing, there can be a strong sewage smell in the water, especially by the beach’s restaurant.

“It’s not pleasant!” said Goldstein. “You know you’re in it..and there’s a foul taste in your mouth.”

“People can tell the difference in smells. A minister or a premier can say what they want,” said Steeves.

Officials from Blue Flag organization confirmed a meeting with New Brunswick’s department of tourism took place Monday. They said Parlee Beach is on the list of candidates for a certification, and the provincial park could qualify as early as 2019, if water samples are within safe levels 80 per cent of the time.

One of the samples taken at the beach Sunday contained 1,850 units of fecal bacteria/100ml water — almost 30 times over safe levels.