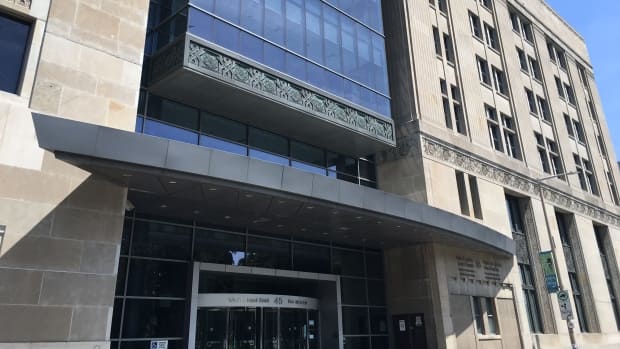 The man in the prisoner’s box cries for 20 minutes straight, but few in the courtroom seem to feel bad for him.

The 37-year-old Hamilton man, in jail for two years now, is pleading guilty to sexual interference with a seven-year-old girl, his good friend’s stepdaughter. Police found a video of him having sex with the girl, which he said he did because he was “really bombed and just wanted to try it.” Investigators identified him by the tattoo on his hand.

“Guilty,” he squeaked in a small voice when the judge asked him how he pleaded. He pleaded not guilty to making child pornography, and that charge will go to trial next week.

The man is the last of five people charged in relation to the sexual abuse of the girl. The others include her mom’s then-boyfriend, who officials say offered her up to pedophiles on Craigslist. The ex-boyfriend is now serving 13 years.

The court heard Monday that the ex-boyfriend was living with the little girl’s mom and her three children in Hamilton’s central lower city.

The 37-year-old friend was over at their house when he watched the ex-boyfriend’s homemade child pornography of his step children, including video secretly recorded of the 16-year-old stepdaughter naked in the bathroom.

The ex-boyfriend then roused the seven-year-old from bed and abused her while the friend watched, said the agreed statement of facts.

The friend “disclosed that he ‘got really bombed and just wanted to try it’ and sexually abused (the girl) himself,” the court heard.

Police arrested the ex-boyfriend in early 2016. Investigators searched a laptop and found an April 16, 2016 video depicting the lower body of a man assaulting the girl. Police identified the friend by his clothes and a tattoo on his hand.

As the friend cried in the prisoner’s box Monday, the little girl’s aunt sat in the front row of the gallery, as she has through court appearances of all the accused. She didn’t flinch as she watched the man take off his glasses and cry into his hands.

For a few minutes, though, his tears stopped.

The court watched video of a police interview between the little girl and an investigator, where she used a crayon to mark the spots on a drawing to describe her abuse.

The man watched in silence while the aunt broke down in tears.

The name of the accused is withheld to protect the identity of the victim.