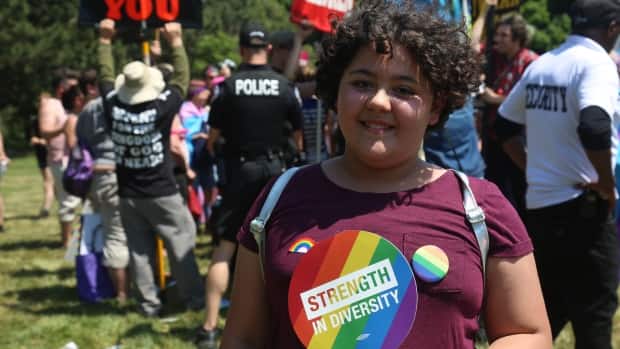 Tenille Howell, 13, went face-to-face on Sunday with a small group of ‘street evangelists’ who told her, she says, that she is “going to go to hell.”

The teen was one of many people at the Pride event in Hamilton’s Gage Park that got underway around 10:30 a.m. Sunday morning, starting with a rally at the park’s fountain.

Just after 1 p.m., protestors showed up, standing in a line, holding signs that read, “Jesus opposes your pride repent.”

Pride supporters met them with drums, signs, and harsh criticism — in an effort to drown them out — just like they said they would.

Pride Hamilton chair, Sean Cullen, immediately walked up to protestors, telling them to leave. “You must leave, you don’t have a permit,” said Cullen.

Not long after, Pride supporters approached the religious protestors and a confrontation began.

“I believe that it was important for me to take a stand and to share God’s love for everyone. I don’t live in the Old Testament.” – Hamilton-based Reverend, Loretta Hill-Finamore

Hamilton police were on scene at the time.

Earlier this week, various community organizers said they were preparing for such incidents after protestors interrupted the Haldimand-Norfolk Pride event in Dunnville Ont. on May 26. and Barrie’s Pride event last weekend.

They said they’d have flags, banners, and a marching band to muffle the group, and that’s what they had on Sunday.

“We’re drowning out their voices as you can hear, and we are going to resist them all the way,” said Cole Gately, Pride Hamilton rally organizer and master of ceremonies. “Love is louder.”

Philip Ness-Thomas says he’s an ambassador and evangelist with a ministry in Toronto, and part of the religious group protesting at the event.

About 13 people were a part of his group, all of which are from Ontario, says Ness-Thomas. 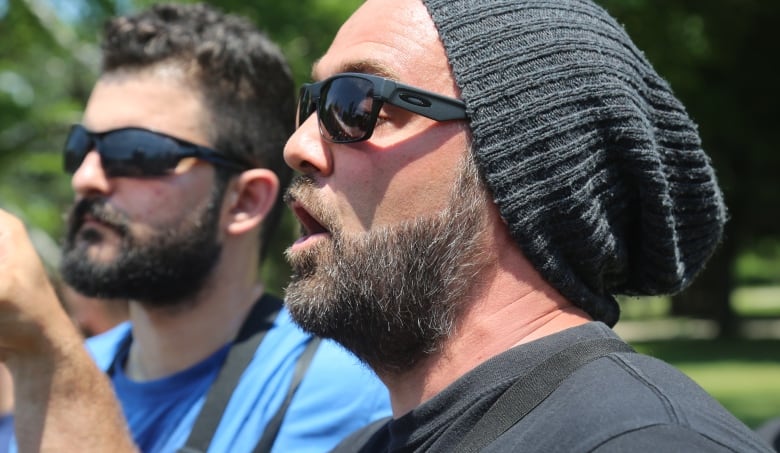 Philip Ness-Thomas says he’s an ambassador and evangelist with a ministry in Toronto and part of the religious group protesting at Hamilton’s Pride event. (Laura Clementson/CBC)

He told CBC News they’re ‘street evangelists’ and preachers who preach in Toronto, local areas, as well as in the U.S. They’re planning to be at as many events throughout June and July.

“We’re here to protest against the Pride parade,” said Ness-Thomas.

“If they say they believe in God, it’s a bible-less God and so we stand up over the word of God. All we’re here to do is preach the word of God,” said Ness-Thomas.

I am so proud of my community right now. My heart is so full.– Pride Hamilton chair, Sean Cullen

He says at the end of the day, “we don’t advocate violence against homosexuals or any of that sort, bullying them. They might call it bullying, but how else do we get the message across? Preach according to the scriptures and that’s what we’re doing,” said Ness-Thomas.

Before the protest group showed up, Hamilton-based Reverend Loretta Hill-Finamore told CBC News that she heard of the negative acts of hatred happening at Pride events and wanted to stand in support.

“As a Christian ally, I believe that it was important for me to take a stand and to share God’s love for everyone. I don’t live in the Old Testament,” said Hill-Finamore. 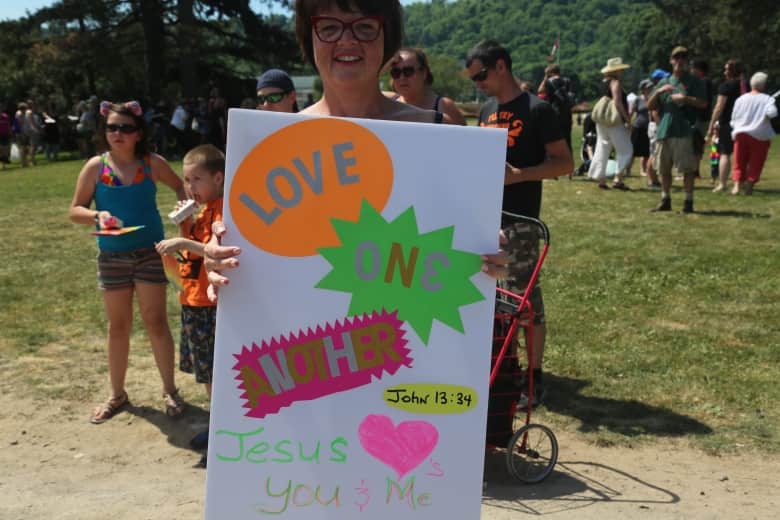 Before the protest group showed up, Hamilton-based Reverend Loretta Hill-Finamore told CBC News that she heard of the negative acts of hatred happening at Pride events and wanted to stand in support of the Pride community. (Laura Clementson/CBC)

The ordained minister says, “God says to love one another.”

At one point, Pride participants gathered in a large circle around protestors.

“I was honestly in tears watching people gather around them and just show how much we support each other,” said Cullen.

At various times throughout the clash however, Pride organizers were asking people to go back to the day’s event, to ignore the protest group.

People were encouraged to find event staff if they needed any kind of support or wanted to talk with someone. 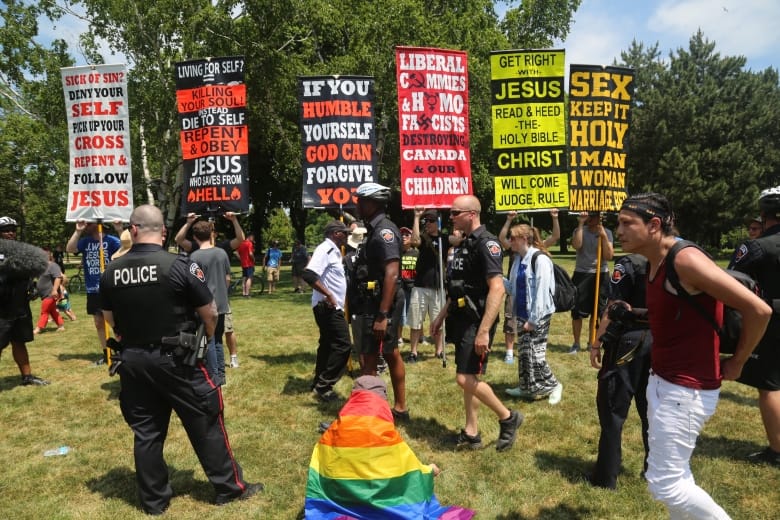 A few hours into Hamilton’s Pride event in Gage Park, religious protestors showed up with signs. Not long after their arrival, they were met by Pride supporters. (Laura Clementson/CBC)

Cullen says that Sunday’s Pride event was one of the biggest seen in Hamilton in the last decade or so.

The chair says there were about 80 vendors, along with performances, food, a family area, and lip sync competition, were among the various aspects of Sunday’s event.

“I am so proud of my community right now. My heart is so full,” said Cullen.