Dale Dunham wanted to share his journey of self-discovery with those closest to him, so in early 2016, he started a blog that told his story of what he calls his “authentic self” — his story of coming out as a gay man, following several failed relationships.

He believed that sharing the story would be a healing act for him, and might make someone else going through a similar experience feel a little less alone in the world.

He called the blog the Living Without Disguises Project.

“It was something I was going to … share with family and close friends to help them to understand what I’d gone through in my youth and how those events had created effects in my life where I started to wear a disguise on my own,” Dunham said in an interview Monday on The Homestretch.

“When I was younger, I was bullied quite a bit, so I created an alternate personality that I thought would be more accepted.”

Then, on June 12, 2016, the Pulse nightclub shooting happened. Forty-nine people were killed and 53 were injured in a shooting spree at a gay nightclub in Orlando, Fla.

“When the Pulse nightclub shooting happened, I decided over the next couple weeks that I wanted to open the project up, so that other people [from the LGBTQ+ community] could share their stories — so that no matter what happened to them, their stories would always exist.” 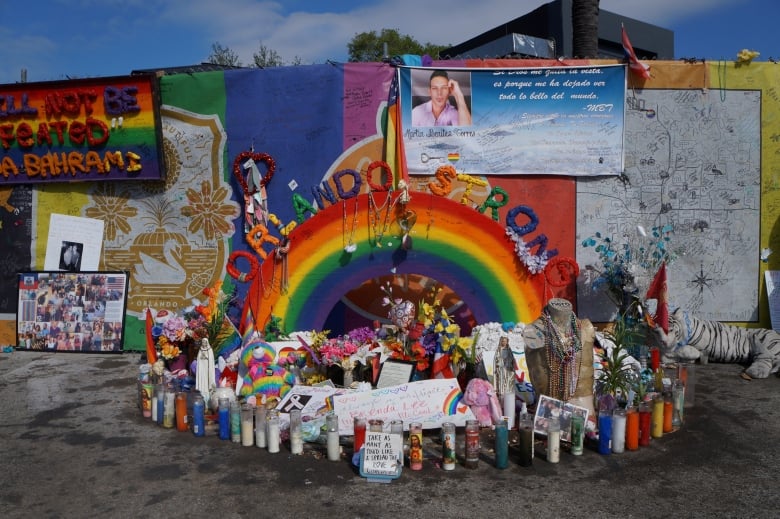 The parking lot at the Pulse nightclub in Orlando, Florida, is seen with mementos and displays honouring the 49 people who were killed during the mass shooting. (Letitia Stein/Reuters)

In the two years since that date, Dunham has accumulated a number of stories on the Living Without Disguises Project, one of which is his own.

He’s had such a positive response that he’s incorporated it as a non-profit company, with a board of directors and members.

“There’s more accountability and transparency in what I was trying to do … to help really grow it, and to take the vision I’d really originally had, and expand upon that, to create new initiatives, to create new opportunities for people to be able to share their stories and collaborate with us.”

Dunham, who is based in Innisfail, Alta., is embarking on an ambitious summer of events, in an effort to connect with members of the LGBTQ+ community across Western Canada.

“Over the next several months, we’ll be at several pride events in Western Canada. We were just in Edmonton last weekend. We’ll be heading down to Lethbridge in a couple weeks. We’ll be in Victoria, Kelowna, Vancouver, Kamloops, Red Deer — and that’s just over the next couple months,” he said.

“Then next year, we’ll be embarking on a round-the-world trip,” he added. “We’ll be in Israel, Greece, France, Russia, India, Thailand, Australia, New Zealand, Japan — and a few others along the way.”

What difference does it make?

All of which raises a question: what difference does it make to people to share their story on a blog?

“A lot have said it’s very freeing for them,” Dunham said. “That when the time came and that it was actually published, that it was very cathartic and allowed them to move past it. That it was a way to almost compartmentalize it and put it aside.”

One story that stands out came from a woman Dunham met at Brighton Pride last August.

“When she first approached the booth and started talking about it, she was really unsure [about sharing her story], so we came up with an agreement,” he said.

“Once a week, I would send her a question and she would answer that question and we would build upon her story from that. And over time, she completed her story. Now she’s moved on, and she’s actually writing books.”

They say everybody has a story to tell. For people in the L-G-B-T-Q-+ community, those stories can be tough to talk about sometimes. But sharing those memories, both the good and the bad, will hopefully become a bit easier thanks to the ‘Living Without Disguises Project.’ It’s a non-profit organization that aims to collect and share L-G-B-T-Q+ stories from across the globe. Dale Dunham is the founder of Living Without Disguises. Right now he’s based in Innisfail, and he joins Terri in studio 8:42

Dunham says the secret to his success in getting people to share their stories with readers of the Living Without Disguises Project is his belief in it.

“I talk to a lot of people. That’s really what it comes down to,” he said.

“Social media is a wonderful way to go out organically and for people to find out about the project, but for me, I’m just relentless.”

The payoff perhaps is that by creating a digital landing spot for the LGBTQ+ community to share their stories, he’s managed to create the virtual community that his real life lacked — even after coming out.