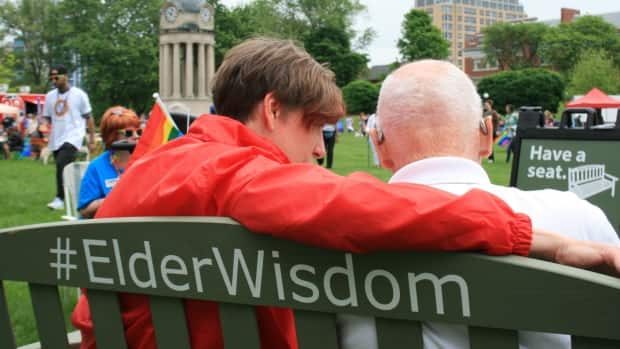 Follow your love. Don’t dwell on the negative. Be yourself.

If you were to ask 94-year-old George Calder for some life advice, that’s more or less what he’d tell you.

And if you ask for a book recommendation, he’d tell you Development of Jet Engines was a pretty good read.

“I was in the air force and I always loved flying, and I used to fly after the war, too. That’s occupied a lot of my attention, I suppose,” he said with a laugh.Most of us know we’re supposed to respect our elders, but an Elder Wisdom project making its way across Ontario is asking us to listen to them too. Life advice from 94-year-old George Calder, his son Wayne and the people working at Schlegel Villages retirement communities in Ontario. 6:58

Calder is one of dozens of people from Schlegel Villages long-term care homes taking part in the #ElderWisdom project, a social awareness campaign that shines a light on the way older adults and seniors contribute to their communities.

They’ll sit on a little green bench that is taking a tour of Ontario this month through 15 Ontario cities — including London, Toronto, Guelph, Waterloo and Windsor — and take turns sharing their knowledge with the hope of chipping away at ageism.

‘None of us want to get older’

“In our world, ageism is a huge issue. None of us want to get older. Even seniors that come to tour [our facilities] say, ‘I don’t know if I can live around so many old people,'” explained Brad Lawrence, general manager of the Village at Winston Park in Kitchener. 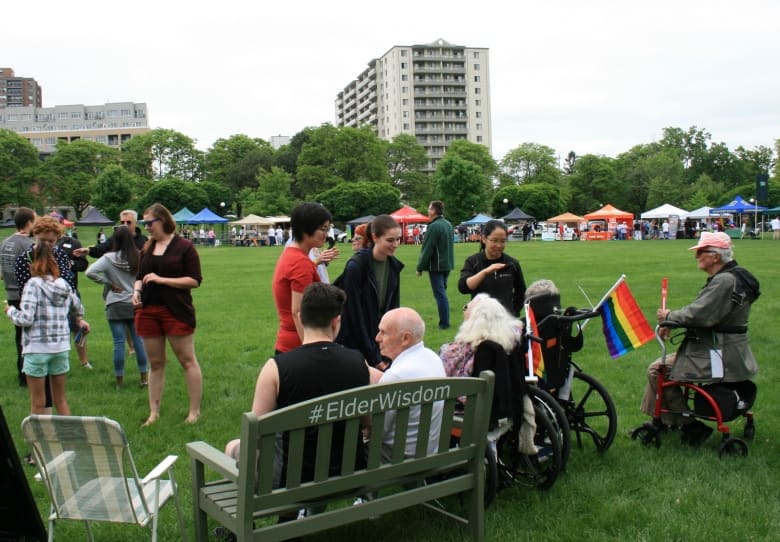 George Calder was kept busy chatting with Pride attendees. His advice is simple: Follow your love. Don’t dwell on the negative. Be yourself. (Submitted by: Ted Mehy)

The Wisdom of the Elder project comes from the mind of Ron Schlegel, a professor, philanthropist and community leader in Waterloo region whose family runs more than a dozen “villages” across southwestern Ontario. The villages are set up with home areas for residents, with neighbourhoods, main streets and town squares to give a sense of community to the people living there.

“Ron Schlegel says, ‘We gain knowledge from books, but knowledge only becomes wisdom with personal experience.

“One of the most hidden treasures in society is this accumulated wisdom. If we only stop long enough to listen to the stories of our residents, we have much to gain from them,'” quoted Ted Mahy, the online engagement manager for the #ElderWisdom project.

The bench makes the following stops through Ontario, through to the end of June: