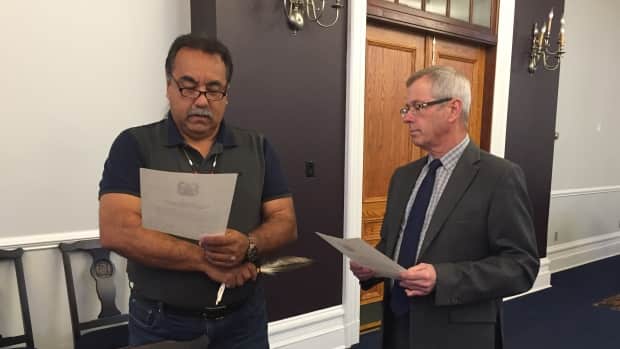 The Halifax Board of Police Commissioners held a swearing-in ceremony for its first Indigenous member, Anthony Thomas, on Monday. Thomas said it’s time his community was represented on the board.

“The people I’ve told are quite happy, quite pleased,” said Thomas, “So I think they want that voice there.”

Thomas is Cree and originally from Norway House Cree Nation in Manitoba but has lived in Nova Scotia for many years and is now part of Sipekne’katik First Nation. He’s been a federal parole officer with the Correctional Service of Canada since 2000.

“I’ve seen a lot of stuff and worked with the police and the RCMP,” said Thomas. “I think it will help, hopefully.”

The chairman of the police commission, Coun. Steve Craig, says he has worked with Thomas for decades in Lower Sackville.

“It’ll bring a new perspective,” said Craig. “The diversity of the police commission right now is quite extensive.”

Thomas has a bachelor’s degree of social work from Dalhousie University and has been on the board of the Mi’kmaw Native Friendship Centre for more than 20 years.