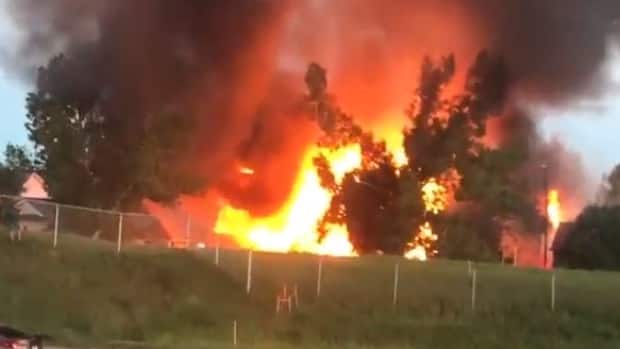 Three houses in Woodbine in southwest Calgary were engulfed in flames when firefighters arrived at the scene late Tuesday evening.

Fire crews were called to the 100 block of Woodbrook Way S.W. at about 10 p.m. and a second alarm was quickly struck.

Crews set up an aerial water attack and worked to protect the neighbouring homes while they got the blaze under control, the fire department said in a release.

It wasn’t possible to search the burning homes, but all occupants were accounted for. One person was treated at the scene by medical crews.

One dog was found in the back yard of one of the homes and reunited with its owner, fire officials said.

Enmax crews were called to the scene to fix an electrical transformer serving several houses that was damaged by the fire. Atco Gas crews were needed to fix a supply line that ruptured from the intense heat of the fire and a collapsed wall.

Crews are still at the scene putting out hot spots.