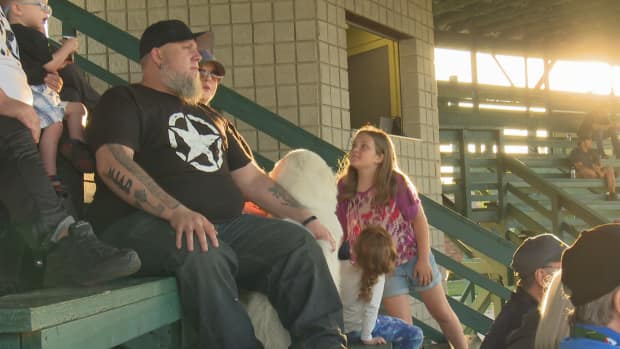 When Jordan Wood started the Facebook group, Not Just A Dad, he thought it would be a small escape for fathers in the Windsor-Essex area.

“It started out as you might expect. A bunch of guys just sharing stories, posting dad-type memes, and telling funny stories about their kids.”

Wood never expected what happened next. He noticed N.J.A.D. members setting up plans to meet for coffee. They even worked on each other’s cars for free. And a few members who dealt with substance abuse even organized therapy sessions.

Now, N.J.A.D in Windsor-Essex has more than 4000 members — and those numbers are increasing across the country.

Jordan Wood’s goal for N.J.A.D. is touch the lives of people beyond “the neighbour next door.” He said his brother took his own life after serving in the military. Wood hopes groups like N.J.A.D can provide a sense of community to people who need it. (Sanjay Maru/CBC)

Wood opened the group on January 20 and noticed rapid growth within a few, short weeks. This prompted him to design branded stickers in an effort to increase awareness of N.J.A.D.

“It was great. People were sticking them on everything. They really started to bring everybody together … Before you knew it, we shot up to a thousand [members].”

After making a fair amount of profit from the stickers, Wood decided to invest the money back into the group by hosting grocery and gas card contests. He even started giving these items to people who really needed them.

One of the most frequent type of post in the N.J.A.D. Facebook group is of members “spotting” one another on the road. (NJAD Dads of ON – Windsor Chatham Essex/Facebook)

The group grew to such an extent that Wood felt he needed to protect the work of the membership.

“I trademarked the logo … and we registered the Not Just A Dad name as a not-for-profit on April 24,” Wood said.

“I clicked a few buttons and registered a name. That’s all I did. It was all these guys — the things they were doing for one another and the way they were all, on their own, reaching out to the community.”

But it’s not just limited to Ontario. N.J.A.D. Facebook groups have popped up in Calgary and Edmonton as well.

“Guys started popping up all over the country saying, ‘I wish I had this in my community.’ So we have Facebook group and little outreaches that have happened in cities all across the country.”

One of Wood’s fondest memories of running N.J.A.D. was being able to put a smile on the face of a little girl who had her bike stolen.

“We bought her a new bike. I actually had my daughter come with me to Toys “R” Us. We picked out a basket for the front of the bike. I told my daughter, ‘Picture yourself going on an adventure to the park. Fill the basket with everything you’d need,'” he said.

“We all met the little girl at the park. It was awesome — watching her ride her new bike.”

When N.J.A.D. went on a mission to purchase a bike for a little girl who had hers’ stolen, 11-year-old Lilly Martin, Wood’s daughter, went to the mall with her father to make sure the group bought the perfect one. (Sanjay Maru/CBC)

Wood’s daughter, 11-year-old Lilly Martin, was not there to see the bike given to its new owner, but said she was happy to help N.J.A.D. figure out what to buy because they needed a little girl’s perspective.

“It made me feel happy that someone was getting a bike.”

Lilly’s support of N.J.A.D. doesn’t just stop at shopping for items with her father. She’s even come up with a new idea on how to increase the organization’s reach.

“The other day, we were looking at Kids of N.J.A.D,” Lilly said, adding she would love to run that branch of the organization if she had the opportunity.

Fred Cuffe was referred to N.J.A.D. three months ago by a friend. He said the group no longer makes him feel “alone” as a single father of four children. (Meg Roberts/CBC)

Providing a sense of community

Fred Cuffe had previously known Wood through work where they exchanged the occasional nod during their five years at the same workplace.

Cuffe joined N.J.A.D. in March and now considers Wood to be one of his best friends. He was immediately drawn to the group’s sense of togetherness and said his current role is to transfer merchandise to members.

“It’s an honour to do so … I get to meet these gentlemen from the group. You see their names attached to [online] comments so it’s like a family reunion,” Cuffe said.

“It’s made me more secure with who I am as a person — not just as a dad … To reach out and help other people has been the cure-all for me.”

Cuffe said his kids have noticed a change in his personality since joining N.J.A.D.

“They’ve made mention that I seem happier … Everything. my parenting, my state of mind, my work ethic. This has been the most beneficial thing I’ve been a part of besides family itself.”

Mark Riberdi, a single father of two children, said he fell in love with N.J.A.D. after the group hosted a barbecue fundraiser. He uses his 13 years of experience as a fitness instructor to facilitate weekly exercise sessions for N.J.A.D. parents and children. (Sanjay Maru/CBC)

Mark Riberdi, a single father of two children, said he fell in love with N.J.A.D. after the group hosted a barbecue fundraiser. A portion of the proceeds went to Big Brothers Big Sisters Windsor — an organization which holds near and dear to Riberdi’s heart.

“I had a Big Brother myself for four and a half years. It was nostalgic for me being back in the building and giving back,” he said.

Riberdi, who has worked as a fitness instructor for the past 13 years, hosts weekly N.J.A.D family fitness groups every Wednesday.

“Kids can play on the playground or they can get physically active with us too,” he explained, adding it’s a great way to promote health and fitness while reaching out to the community.

Whether it’s buying a bike for a little girl or repairing another person’s car for free, members of the Windsor-born Facebook group, Not Just A Dad, are on a mission to touch as many lives as they can across Canada. 0:38

The key to N.J.A.D.’s success, according to Wood, is the lack of mandates on the group’s operations. He’s happy to let the membership dictate the progression of N.J.A.D.

Wood held back tears when discussing just how many lives the group has touched in the Windsor-Essex area. He’s excited for that same impact to be felt across the country.

He said it would be nice for N.J.A.D. to operate out of a building one day with two distinct areas for members of the group.

“On one side, young families could go and get financial services, marriage counselling or any type of social service they may need,” he said.

“On the other, they could have fun, laugh and watch their kids play in bouncy castles out back.”